Supreme Court ghosts haunt Sereno in her next chapter

Jul 2, 2018 8:57 AM PHT
Lian Buan
Facebook Twitter Copy URL
Copied
Insiders say Sereno must first address problems she left at the Supreme Court before taking on other roles, but she remains defiant, saying there will be vindication in the end 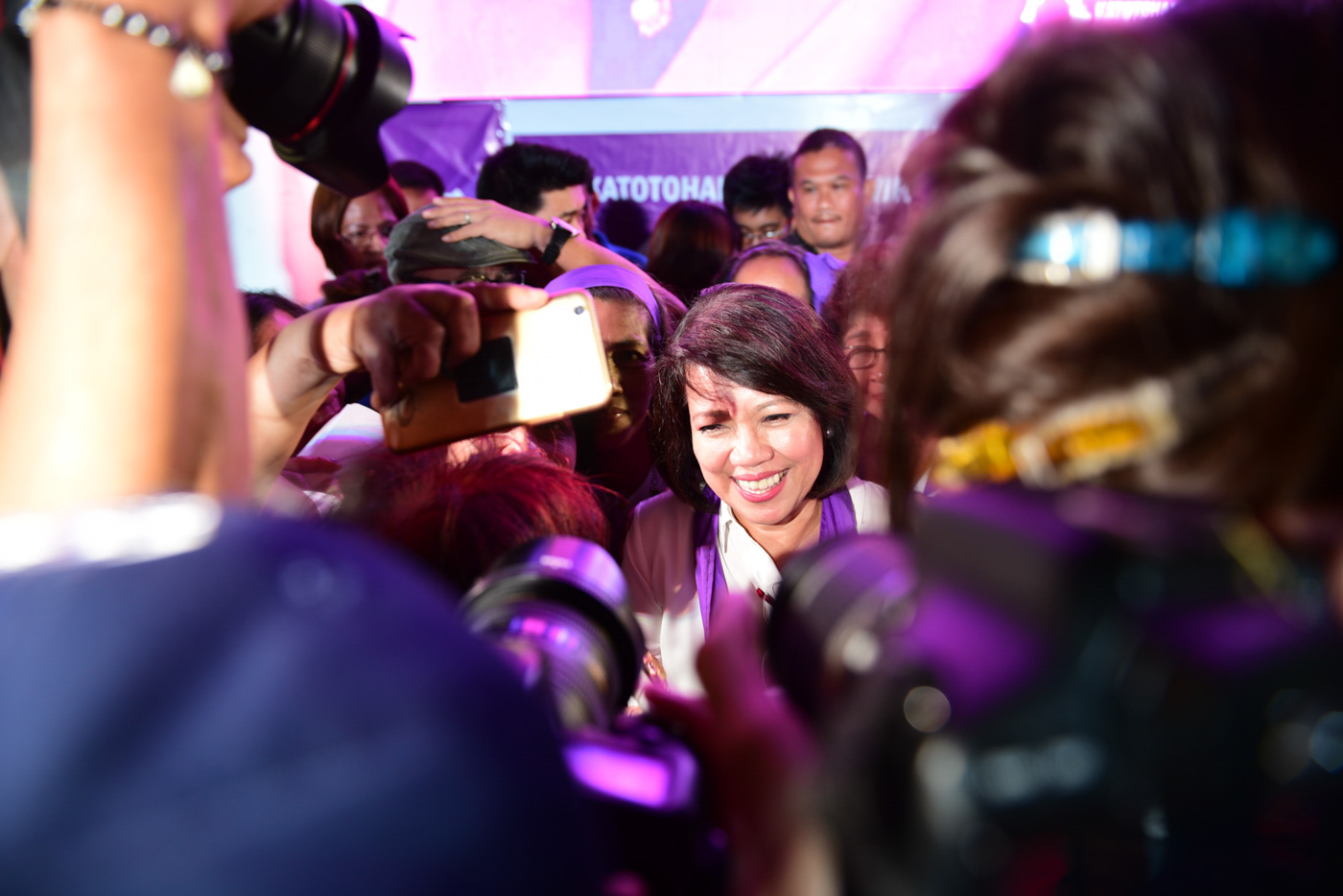 MANILA, Philippines – Maria Lourdes Sereno does not seem like she will quietly walk away from public life.

For one, the ousted chief justice said she will start a movement of sorts to discuss reforms in the judiciary and how to attain social justice.

She also remains open to a Senate bid.

“No, no I’m not [closing my doors]. At the appropriate time, there will be an explanation or a statement to be made by the public whether I would pursue a run or not,” Sereno said in a recent interview with Rappler.

But ghosts of the past are likely to haunt her as she begins the next chapter of her life. (READ: The Supreme Court post-Sereno: Better off or not?)

Right now, there’s already an audit red flag on the P5-million car the Supreme Court (SC) bought for her. Questions on her Statements of Assets, Liabilities, and Net Worth (SALNs) still hang in the air, and so does the possibility of prosecution.

“I’m not too terribly worried about that,” she said confidently.

If she does run for senator, however, she should be ready for the rough and nasty brawl that is Philippine elections.

Her immediate problem is the P5-million Toyota Land Cruiser that she used as a service vehicle when she was the top magistrate.

An audit observation memorandum (AOM) sent to the SC said the “detailed technical specifications of the Toyota Land Cruiser as reference in the bidding documents” were contrary to Republic Act (RA) No. 9184 or the Government Procurement Reform Act.

“In addition, the price of the Toyota Land Cruiser amounting to P5,110,500.00 was also used as Approved Budget Contract without market analysis or basis to determine if it was the most advantageous prevailing price for the Supreme Court, contrary to Section 36, Rule X, also of the Revised Implementing Rules and Regulations (IRR) of RA 9184,” said the AOM obtained by Rappler.

An AOM is sent by auditors to an agency or institution to seek their comments, before the Commission on Audit (COA) makes its final notes and recommendations in an annual audit report, which will be made public.

Sereno’s spokesperson Jojo Lacanilao said the former chief justice will no longer be made to answer for the issue.

“[The] AOM is addressed to the Supreme Court, which should look into it. The purchase of the Land Cruiser was done by the SC in the name of the SC. The SC is the owner of the vehicle, not [Sereno],” Lacanilao said. 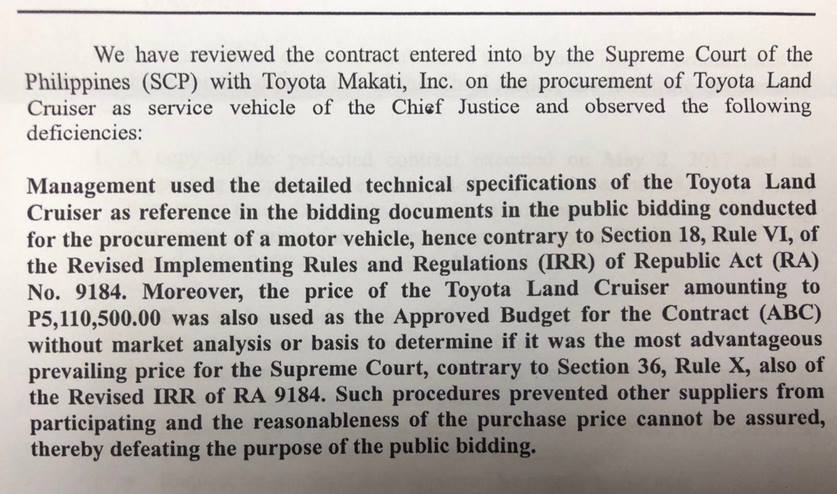 Sereno’s hiring of two people is also the subject of administrative matters still pending before the en banc.

The hiring of Brenda Jay Mendoza as head of the Philippine Mediation Center (PMC) was questioned by Associate Justice Teresita de Castro for not being approved by the en banc.

In the heat of the impeachment hearings at the House of Representatives, Mendoza resigned.

Two SC insiders told Rappler that the Mendoza issue may just be rendered moot because of her resignation.

A bigger issue is the hiring of information technology (IT) consultant Helen Macasaet, who was paid a total of P11 million for 4 years’ worth of contracts to oversee Sereno’s master plan to digitize the Court.

It turns out the SC called for an internal investigation. The SC’s Office of the Chief Attorney came out with findings that Macasaet’s hiring “did not faithfully observe” the law.

“The provisions of the consultancy fees in all of the 8 contracts of services of Ms Helen Macasaet violate Section 61.1 and Annex F of RA 9184 and its revised implementing rules on fixed price consultancy contracts,” the report stated, among other laws allegedly violated.

The report was signed by Maria Regina Filomena Ignacio, the acting chief attorney, and other court attorneys. They recommended to the en banc to void Macasaet’s 8 contracts, as well as for her to refund the excess which would be determined by the Court. The report still has to be decided on by the en banc.

“With respect to Helen Macasaet, everything is aboveboard. She was given a fee that was very much below market rate and below the kind of services that she had rendered. So there’s nothing to be afraid of, my conscience is perfectly clear,” Sereno maintained.

What has been decided by the en banc is Sereno’s alleged non-filing of SALNs.

When the majority ousted her via quo warranto, they also ruled that she violated not only the SALN law but also the Constitution.

“This means that the prima facie evidence establishing respondent’s repeated failure to file her SALNs remains uncontradicted, and thus, respondent can be held liable for her repeated non-filing of SALNs while she was employed as a UP College of Law professor,” Acting Chief Justice Antonio Carpio said.

These kinds of findings are what create charge sheets at the Sandiganbayan, but Sereno said she is not “too terribly worried” about them.

“The hearing was held in the Supreme Court. [It] was not a trial-type hearing so it was an interpellator’s question where the basic premises were not carefully laid down. I’m not too terribly worried about that,” she said.

Sereno also has to explain to the SC why she should not be disbarred for violating the sub judice rule, or for making public remarks about ongoing judicial proceedings.

Plus, her staff are embroiled in legal cases filed with the Department of Justice (DOJ) over their involvement in the alleged procurement anomalies.

Several insiders said it would do Sereno good to take a step back, reflect, and fix these problems first.

As usual, the former chief justice is defiant.

“The important thing to remember is always to do what is right, regardless of the consequences or the odds. You stand for what is right, and you will be sure that there will be vindication in the end. So because of that vindication, no, fear is not a factor,” she said.