Lorenzana to Joma Sison: Without peace talks, you are irrelevant 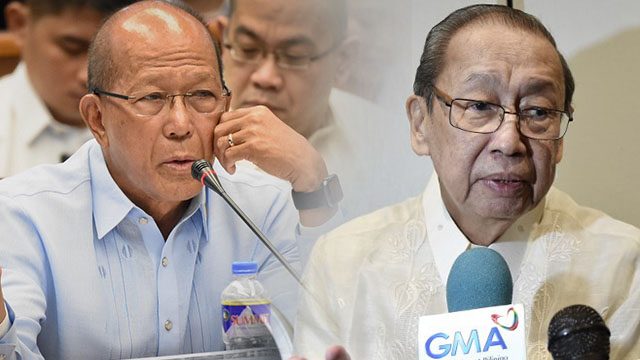 Facebook Twitter Copy URL
Copied
'Mr Sison, you know that the peace talks is the only thing that is keeping you in the limelight,' Defense Secretary Delfin Lorenzana tells Communist Party of the Philippines founder Jose Maria 'Joma' Sison

“Mr Sison, you know that the peace talks is the only thing that is keeping you in the limelight. Without it, you are irrelevant,” Lorenzana said in a statement.

“You also know that the President can terminate the talks, and this is why you are desperately using reverse psychology and intimidation to save it,” he added.

On Thursday, June 28, Sison said the National Democratic Front (NDF) “can no longer negotiate” with the government of President Rodrigo Duterte after its alleged failure to agree to the communist rebels’ long-standing demands.

The NDF is the political arm of the CPP, which is behind Asia’s longest-running insurgency. It has engaged in on-again, off-again negotiations with the Philippine government for more than 3 decades since the administration of former president Corazon Aquino.

The peace talks progressed during the presidency of Duterte, who vowed to reach a peace deal with the communist rebels by the second year of his term. (READ: Duterte’s romance with the Reds)

Lorenzana said the government will now focus on “localized peace talks” in the absence of Sison.

“Dapat kang mahiya dahil inabandona mo ang iyong mga mandirigma (You should be ashamed for abandoning your warriors),” he said. “That’s why they are coming down in droves to live peaceful and productive lives.”

“I am sure that once you are out of the picture, true peace will have a chance to become a reality and you will be consigned to the dustbin of history,” Lorenzana added.

Duterte earlier brushed aside Sison’s statements, adding that the government’s operations against the New People’s Army (NPA) will continue. (READ: The end of the affair? Duterte’s romance with the Reds)

“Wala akong problema (I have no problem), so we continue with the war. Anyway, we’ve been there for 50 years. Ano ba naman na dagdagan natin nang (So what if we add another) 30 years?” Duterte said last Thursday. – Rappler.com