Jul 1, 2018 10:40 PM PHT
Rappler.com
Facebook Twitter Copy URL
Copied
The Commission on Audit finds that there are only 23,030 firefighters in the Philippines – less than half of the ideal number 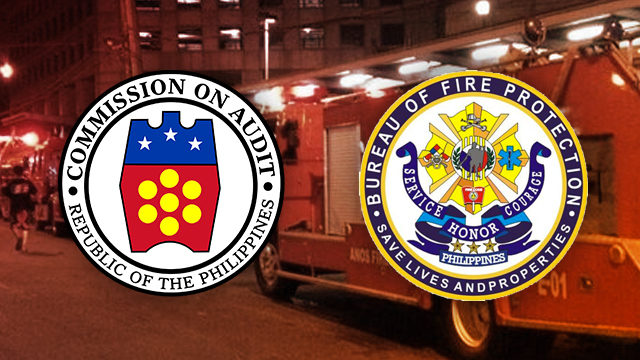 MANILA, Philippines – The Commission on Audit (COA) flagged the insufficient manpower and shortage of fire trucks of the Bureau of Fire Protection (BFP).

In a report released on Friday, June 29, state auditors noted that the bureau does not follow the standard set by the Housing and Land Use Regulatory Board (HLURB) of one fireman for every 2,000 people.

With only 23,030 firefighters, the current roster is less than half of the ideal number of 50,490 firefighters.

The BFP said it requested a bigger budget to hire at least 10,000 more personnel. The DBM, however, only approved allocations for 2,000.

The bureau also said it will enhance coordination with local officials to designate fire prevention officers and work on campaigns, among others.

Aside from the insufficient manpower, only half of BFP personnel have basic protective gear. The bureau, according to the COA report, only has:

The bureau also lacks self-contained breathing apparatus (SCBA) devices – crucial equipment for rescuers going into burning structures. It only has 1,939 units – a shortage of 7,022 units to reach the ideal 4 per fire truck ratio.

COA found that these problems stemmed from undelivered pending orders.

Records show that P852.68 million worth of protective gear ordered through the Procurement Service of the Department of Budget and Management (DBM) have yet to be delivered, some ordered as far back as 2012.

State auditors also found that the BFP only has 2,350 serviceable fire trucks nationwide.

That falls short of the HLURB standard of one fire truck for every 28,000 residents. According to government data, the Philippines should have had at least 3,608 fire trucks in 2017.

According to COA, old fire trucks are costly to maintain and could be unreliable.

“From the auditors’ viewpoint, utilizing old firetrucks incurs higher cost of major repairs and maintenance, not to mention the dangers it could possibly cause to both residents and firefighters,” state auditors said.

In May 2017, COA already ordered the BFP to buy new fire trucks instead of spending an “unreasonable” amount of money to repair aging ones. – Rappler.com