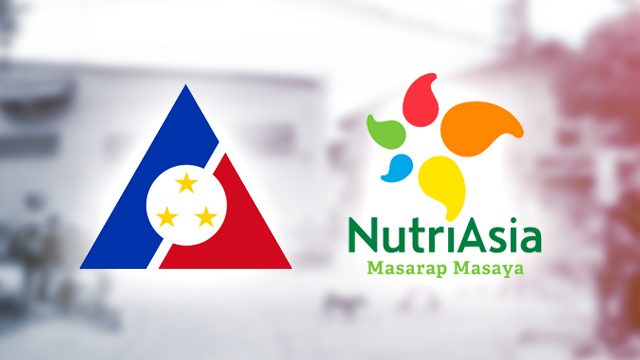 MANILA, Philippines (UPDATED) – The Department of Labor and Employment (DOLE) ordered condiments giant NutriAsia Incorporated (NAI) to regularize 80 workers of one of its contractors.

In a statement on Tuesday, July 3, DOLE said it found that contractor AsiaPro Multi-Purpose Cooperative (AMPC) was engaging in labor-only contracting schemes, and ordered NutriAsia to stop contracting activities with the firm.

A June 25 order issued by DOLE Central Luzon Director Zenaida Angara Campita stated that AMPC “has no capacity to procure its own equipment and machinery because it leases the said tools” from NutriAsia.

Under the Labor Code, the contractor or subcontractor merely recruits, supplies, or places workers to perform a job, work, or service for a principal.

It’s labor-only contracting when the contractor or subcontractor does not have substantial capital or investment to provide tools or work premises, and the workers it places are performing activities directly related to the principal business of the contractor’s employer.

“The labor inspectors also noted that AMPC did not solely exercise control and supervision [over] the performance of its workers under the job or work contracted out,” DOLE said on Tuesday.

“They also noted that AMPC workers are engaged in quality control and research and development which are all directly related to NAI’s main business.”

In a statement sent to Rappler, NutriAsia spokesperson Thelma Meneses said they “respect the DOLE’s ruling on AMPC,” but will still file an appeal.

“As reiterated by Undersecretary Joel Maglunsod, the regional level is not final and executory. We will invoke our right to appeal at the Office of the Secretary of Labor (Silvestre Bello III),” Meneses said.

DOLE said B-Mirk was found compliant after it submitted proof of compliance and refunded unauthorized salary deductions from 519 workers. The total refund amounted to P806,353.11, and was reimbursed on March 15.

Earlier in June, workers from NutriAsia contractors in Marilao, Bulacan staged protests against the company. In mid-June, local police violently dispersed the workers. (LOOK: Why NutriAsia workers are on strike)

Union workers who went on strike against NutriAsia were part of the B-Mirk group. The condiments giant earlier said it “welcomes DOLE’s findings” on B-Mirk’s compliance and “hope to bring the dispute to a peaceful resolution.”

“It was unfortunate in the past that there were many negative reactions to this issue due to false information but we welcome the truth with this ruling and hope that all parties do the same,” NutriAsia said in a statement posted on its website last June 27.

“NutriAsia stands firm with its values of Malasakit (Compassion), Excellence, Respect, Integrity & Ingenuity, Teamwork. We humbly ask everyone to move on and continue the journey towards the righteous path of compliant and good labor practice,” it added.

DOLE issued Department Order (DO) No. 174 in March 2017, setting stricter guidelines for contractualization. Under the order, manpower agencies – not the main employers – are ordered to regularize their workers. (READ: Keeping ‘endo’ alive: DOLE’s Department Order No. 174)

In April, President Rodrigo Duterte ordered DOLE to submit a list of companies engaged in contractualization. The labor department found that 767 companies were engaged in labor-only contracting. – Rappler.com