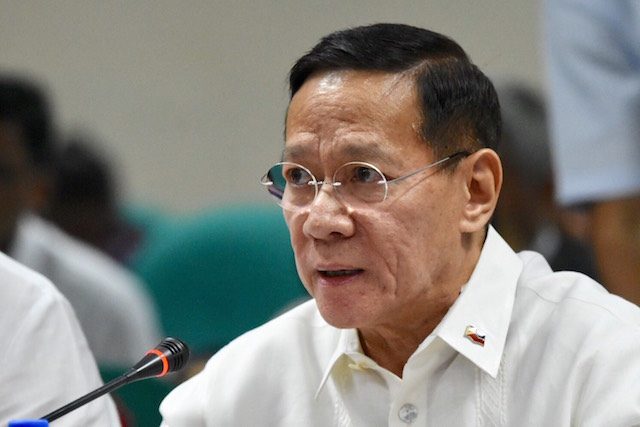 Duque made the statement in an interview with Rappler on the sidelines of the Senate hearing on the Department of Health’s (DOH’s) BHS project.

“It’s a good project but we will have to wait for the COA fraud audit and they will tell us – I’m sure there’s going to be a recommendation whether we should pursue it,” he said, when asked about the future of the project.

Duque said the BHS project is a good project as it “will narrow the gap in terms of access by our people, especially the poor, in far flung areas to benefit from he primary care basic health services that will be expected to be provided by the barangay health stations.”

He earlier said there were “possible irregularities” in the implementation of the project, the subject of a task force that he formed. (READ: DOH uncovers billion peso irregularity in Barangay Health Station project – Duque)

During the Senate hearing, Duque and former health secretaries Janette Garin and Paulyn Ubial had a heated exchange over the “poor planning” of the project. (READ: Duque hits Garin over ‘poor planning’ for Barangay Health Stations project)

Duque said the root cause of all the problems is the “very defective” planning from the start as it had a lot of “loose ends.”

“Kung naplano ng maigi and nagkaroon ng guidelines, itong mga detalye sana ay nailatag. Kasi parang naghahabol na’ng lahat [ngayon] (If there was careful planning and there were guidelines, these details would have been laid out. Because now, it seems that everything’s being done in a hurry),” he said.

Private contractor JBros Construction Corporation also cited the lack of coordination  between the DOH and the Department of Education specifically on the sites of the health stations. This led to the demolition of a completely built unit in a public elementary school in Lipa, Batangas, to give way to a school gym.

Officials from the different departments in the DOH also gave conflicting statements. Some officials recommended that JBros Construction should be paid for construction of the health stations.

Addressing this, Duque said the DOH would look to COA to flesh out the “full truthful story.”

“Walang (There is no) consistency of results that had been reported. So at the end of the day it’s the COA, the constitutional body – objective, dispassionate – putting together all of the documents. At the end of the day, ano ba ‘yung (what are the) documentary evidence that can give us the full truthful story? COA is in the best position to do that,” he said.

The BHS project, implemented under then Health Secretary Janette Garin, aimed to establish 5,700 rural health units to ensure barangays have access to primary health care. Public elementary schools were to be identified as sites for the health stations.

Meanwhile, DOH Undersecretary Roger Tong-an, who led the agency’s task force on the investigation into the BHS project, said 218 health stations were completed with complete documentation.

Asked what would happen to these sites, Duque said they would be made operational.

In a statement, Senator Juan Edgardo Angara said the BHS project “remains a noble initiative that must be continued.”

He added the completion of the project would ensure the delivery of the Philippine Health Insurance Corporation’s (PhilHealth’s) primary care package to poor Filipinos. – Rappler.com