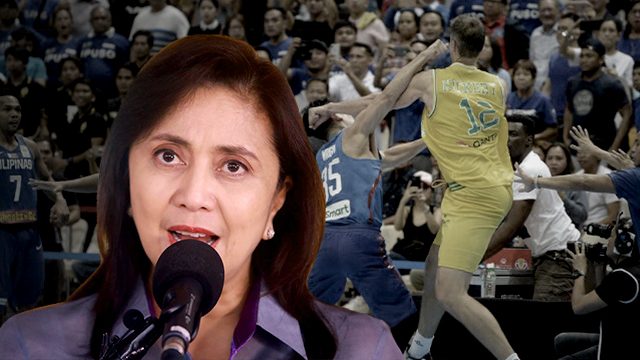 MANILA, Philippines – Vice President Leni Robredo released a statement on Wednesday, July 4, calling for Filipinos to exercise restraint and self-control following a brawl on the basketball court between Gilas Pilipinas and Australia on July 2.

A bench-clearing brawl occurred midway through the 3rd quarter of the match between the Philippines and Australia, which resulted in a default loss for Gilas Pilipinas as 9 players got thrown out and 2 of the 3 players left eventually fouled out.

Robredo said while the brawl seems trivial, it reflects “individual notions of what it means to be Filipino.”

“There are many who insist that what we witnessed was a defense of ‘Filipino pride,’ and it is easy to understand where they are coming from,” Robredo acknowledged.

“We are a nation and a people whose history and experience are sadly replete with many instances of subjugation and humiliation, and lashing out at ‘foreign abuse’ can readily be taken as an expression of patriotism and courage.”

Robredo also pointed out patriotism and courage can go beyond that, saying that it can mean “more than giving vent to our anger, even during the times when there is ample justification for it.”

“Patriotism and courage demand that even in our righteous anger, we must always insist on doing what is right. The curses we hurl and the punches we throw, whether literally or figuratively, may provide immediate satisfaction. But if they undermine the essential justness of our cause, they serve us poorly,” she explained.

“Courage,” Robredo added, “often demands restraint; strength must come with self-control. And many victories have been lost for failure to grasp this truth.”

Robredo also acknowledged those involved in the brawl who expressed regret and promised to work on their shortcomings in an effort to do the right thing. “This is the deeper expression of Filipino pride: owning up to our mistakes, and doing what is necessary to set them right,” she said.

She added, “We can be proud that there are many of our fellow Filipinos who are finding the courage to do precisely that.”

Much has been said about the Gilas Pilipinas incident. But here’s my two cents’ worth. pic.twitter.com/pApZMT9JvJ