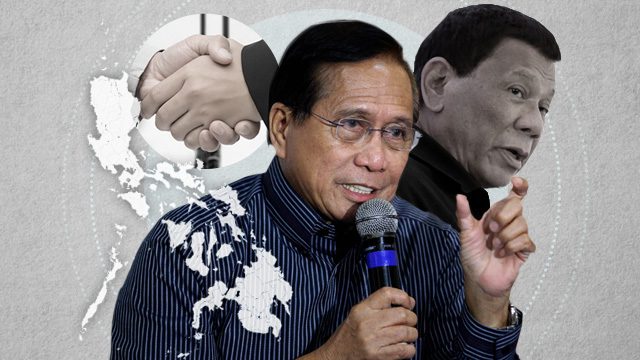 MANILA, Philippines – The Philippine government on Thursday, July 5, has set conditions for the resumption of peace talks, among them, that the next round of talks with communists should be held in the Philippines.

In a statement on Thursday, July 5, Chief Peace Adviser Jesus Dureza said “the doors for the resumption of peace talks with the NDFP are still open,” but subject to the conditions of President Rodrigo Duterte.

One of Duterte’s conditions is for the venue of the talks to be “local” – a demand that the Communist Party of the Philippines (CPP) has long since dismissed. The National Democratic Front of the Philippines (NDFP), the political arm of the CPP, had said the talks need a “foreign neutral venue in compliance with the pertinent provision in the Joint Agreement on Safety and Immunity Guarantees.”

Aside from a local venue, the other conditions are the following:

“In the meantime, localized peace arrangements may be pursued by the local government units with the insurgents in their respective areas of responsibility,” Dureza said on Thursday.

Dureza said the Philippine government has decided on these conditions during a command conference convened by Duterte in Malacañang on Wednesday night, July 4.

“The President also expressed his wish that Norway continues as facilitator in the event peace talks are resumed,” he added.

Peace talks were supposed to resume on June 28, but the military asked for a 3-month postponement. Duterte agreed, and the National Democratic Front, the political wing of the CPP involved in the negotiations, accepted his decision. – Jee Y. Geronimo/Rappler.com