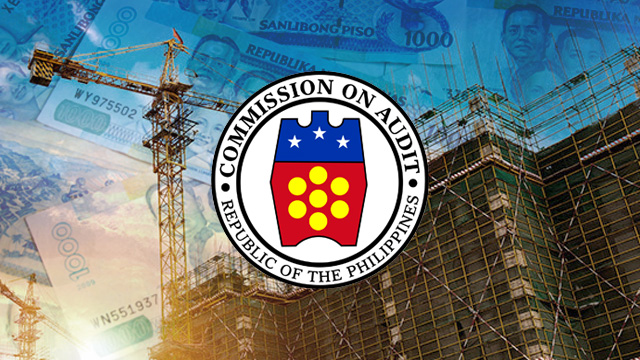 MANILA, Philippines – The Commission on Audit (COA) wants charges to be filed against “erring parties” in Ilocos Norte’s 5 construction contracts where the bidder was also an observer, contrary to the procurement law.

“We recommended that erring parties be filed with appropriate legal charges for the offenses committed in violation of Section 13.4.c of the Revised Implementing Rules and Regulations of RA 9184 (Government Procurement Act),” state auditors said in their 2017 audit report of the Ilocos Norte Provincial Government.

In 5 of these biddings, all for construction work, private individual Engineer Remy Cadiente acted as observer.

But his firm Remar Construction also bidded in all the 5 contracts.

Under the procurement law, representatives from the private sector and non-government organizations (NGOs) shall observe a bidding process. But it also requires that observers inhibit from the bid, and notify the government of any actual or potential interest in the bid.

In two projects, Cadiente’s Remar Construction won the contracts. The audit report did not indicate the project amounts.

“It is significant to note that an observer is allowed access to confidential documents not provided to prospective bidders giving undue advantage to the abovementioned NGO representative/bidder, thus, may affect the integrity of the procurement process,” COA said.

Ilocos Norte’s Bids and Awards Committee (BAC) chairman told COA that “the Committee has no intention to disregard the policies, rules and regulations provided in Section 13.4 of the 2016 Revised IRR of RA 9184.”

“He committed that the recommendation will be strictly followed and gave assurance that a representative from NGOs as observer in all the bidding activities will have no potential interest in the contract to be bid,” said Ilocos Norte in its reply to COA.

COA also noted that Ilocos Norte brought P17.9 million worth of drugs and medicines in a staggered and piecemeal manner, “evading a more economical, effective and efficient manner of procurement resulting in the possible loss of government funds.”

Ilocos Norte engaged in 9 transactions all with CN Medical Distributor when COA said the provincial government could have bought all of the supplies in one go. The transactions violate audit rules that prohibit splitting of requisitions.

The splitting of purchases may have been deliberate to favor CN Medical Distributor.

COA pointed out that purchases worth more than P2 million should have bid advertisements in newspapers. Each of the 9 purchases made to CN Medical Distributor were below P2 million, with 5 of them worth P1.999 million.

“We have observed that all procurement contracts were awarded to a lone bidder, CN Medical Distributor, which may indicate that there was a lack of competition in the bidding conducted. This may be the consequence of splitting requisitions as the procurement of drugs and medicines totaling P17,901,020.00 could have been advertised in a newspaper of general nationwide circulation as required under Section 21.2.1 of the IRR,” said COA.

But this justification is curious to COA because auditors found that Invitations To Bid (ITB) related to these purchases were “seemingly not true.” In fact, CN Medical Distributor make up the bulk of the fabricated documents uncovered by COA.

Medical supplies are also among the P154.125 million worth of goods which COA doubt to have been really delivered to its beneficiaries, because of the lack of a verified accomplished distribution list.

Direct contracting is allowed only if the goods are proprietary in nature, the components require a specific manufacturer, and if they are sold by a n exclusive dealer, all of which COA said are not present in the gas transaction.

In its reply to COA, the provincial government said only Total Philippines offered a reduced price, which was crucial to keep the existence of the Metro Ilocos Norte Council (MINC). Members of MINC get to buy fuel at a lower cost.

“It is a special program of the province that aims to promote high literacy rate by providing lower bus and jeepney fare rates for students and to subsidize transport services for all subtends from marginalized families residing in various towns of Ilocos Norte,” the government said.

Ilocos Norte Governor Imee Marcos and the provincial capitol were the subjects of investigations by the House of Representatives on the alleged misuse of its tobacco funds, as well as vehicle purchases.

Majority Leader Rodolfo Farinas said the House plenary has already approved and submitted to the Ombudsman a recommendation to file criminal and administrative charges against local officials over the vehicle purchases. – Rappler.com