MANILA, Philippines (3rd UPDATE) – Two years after the Philippines won a case against China at The Hague, Rappler editor-at-large Marites Dañguilan Vitug launched a landmark book about this historic ruling on the South China Sea.

Vitug on Tuesday, July 24, unveiled her book Rock Solid: How the Philippines Won Its Maritime Case against China, the first of its kind on Manila’s legal victory against Beijing.

The book was published by the Ateneo de Manila University Press, the publishing arm of one of the leading Catholic universities in the Philippines.

The book launch was held at 5 pm on Tuesday, July 24, on the 5th floor (First Pacific Hall) of the Rizal Library at the Ateneo de Manila University in Quezon City. (The event was postponed from July 18 due to inclement weather.)

Rock Solid was sold at a discounted rate of P490 ($9), or 10% lower than the original price, during the book launch.

The author of Rock Solid is one of the Philippines’ most awarded journalists.

Vitug received the Courage in Journalism Award from the US-based International Women’s Media Foundation in 1991, the Ten Outstanding Young Men (TOYM) Award for the field of journalism in 1993, Ateneo de Manila University’s prestigious Ozanam Award in 2011, and the Glory Medal of Distinction from the University of the Philippines (UP) College of Mass Communication Alumni Association in 2017.

Recently, Vitug was a visiting research scholar at the Center for Southeast Asian Studies of Kyoto University, and in the National Graduate Institute for Policy Studies in Tokyo.

In 1987, Vitug was a Nieman Fellow at Harvard University. She later took her postgraduate studies in international relations, graduating with merit, at the London School of Economics and Political Science, under a British Chevening scholarship. She was a broadcast communication graduate of UP.

Vitug was also editor-in-chief of the award-winning news magazine Newsbreak for almost 10 years.

She authored the best-selling Shadow of Doubt: Probing the Supreme Court, the first book to expose the inner workings of the Philippine Supreme Court.

She also wrote Power from the Forest: the Politics of Logging, which won the National Book Award in 1994 and, with fellow journalist Glenda M. Gloria, co-authored Under the Crescent Moon: Rebellion in Mindanao, which won the same award in 2001.

Story of the Philippines’ victory

In the preface of her new book Rock Solid, Vitug said the idea for the book came from the Philippines’ historic legal victory against China.

“Here, I tell the story of this victory that gave the country so much but was not accorded the attention it deserved,” the author said. 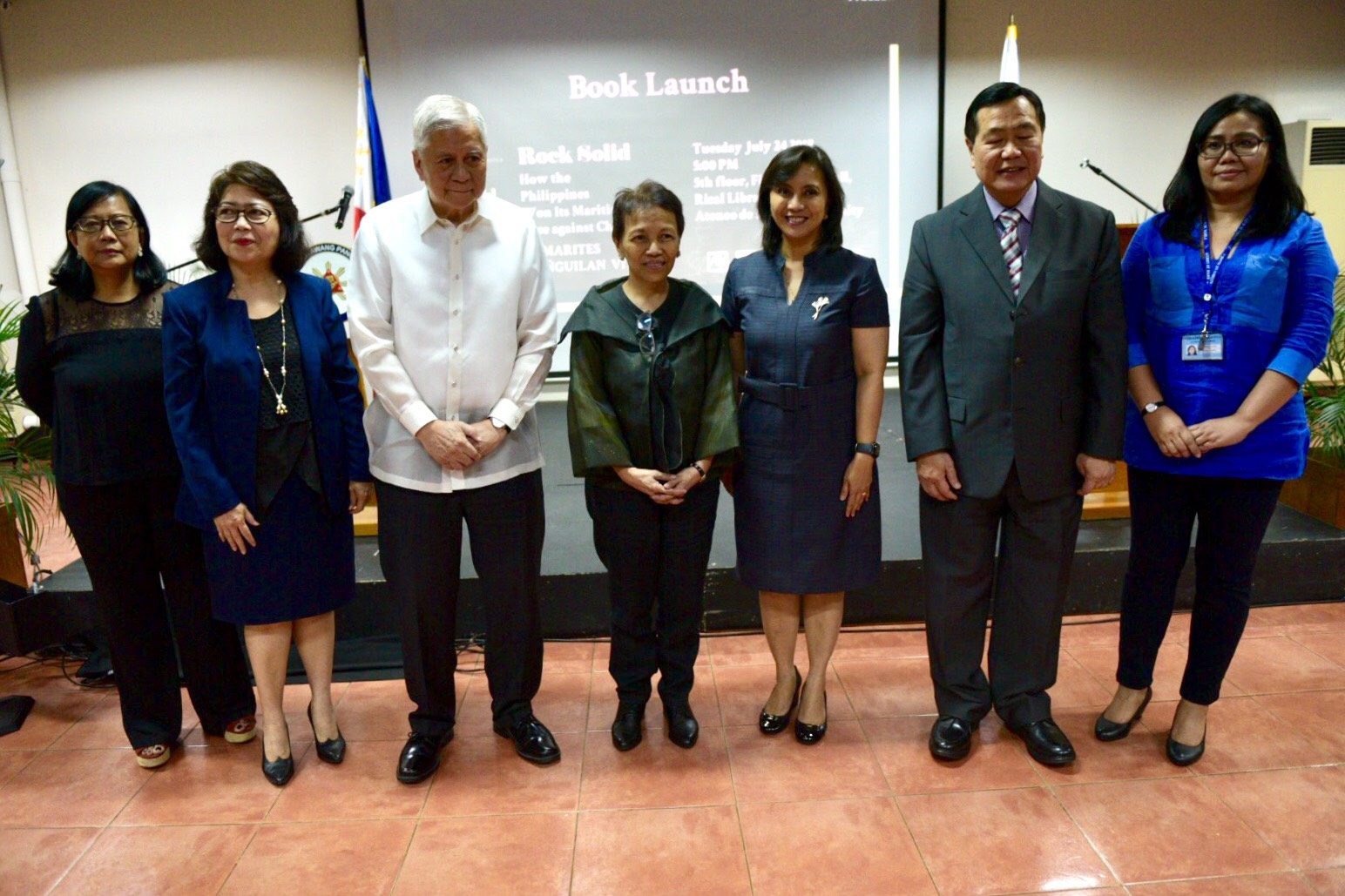 The book comes at a time when President Rodrigo Duterte and his foreign secretary, Alan Peter Cayetano, choose to downplay the South China Sea ruling in exchange for economic benefits from Beijing.

The Philippines won the Hague ruling on July 12, 2016, two years before Rock Solid is to be launched.

Vitug said: “In writing this book, I was guided by these core questions: Why did the Philippines sue China? What led to this brave decision? What were the hurdles that had to be overcome? How did the Philippines frame the case and build it in such a compelling manner? Who were the main actors? What was the outcome and its impact?”

“It dawned on me as I was doing my research that filing the case against China before an international arbitral tribunal was a very big deal. Taking this legal step meant confronting a mega-power that had the might and resources to lash back at a small country such as ours. It meant uniting the whole of government and harnessing talents to be part of this massive endeavor. It tested both the country’s strategic brainpower and the quality of its public servants,” Vitug said.

For this book, Vitug used the transcripts of oral hearings at The Hague, the Philippines’ memorial or memorandum explaining the case, the ruling itself, and volumes of annexes including memos, diplomatic cables from 1995 onwards, notes verbale, and intelligence reports.

“Going over these documents was like cramming years of education into about 16 months of reading, interviewing, and writing,” Vitug said.

“At first, the subject of rocks, reefs, and islands scattered in the South China Sea seemed esoteric to me. But, as I learned, they meant something more than their geographical location. They resonated with an ideal close to the hearts of many Filipinos: asserting and fighting for a country’s rights,” she said.

One of the lessons she learned while writing the book, she said, is that the Philippines “is bereft of strategic thinking.”

“It is moored on short-term interests and has little regard for external forces, primarily the plans of powerful countries and how these impact the country’s politics,” Vitug said.

She also said “the past has a lot to teach us, even if the decisions and actions were made under another government.”

“Thus, the Philippines should learn from its rock-solid victory and not let it go to waste,” Vitug wrote. – Rappler.com