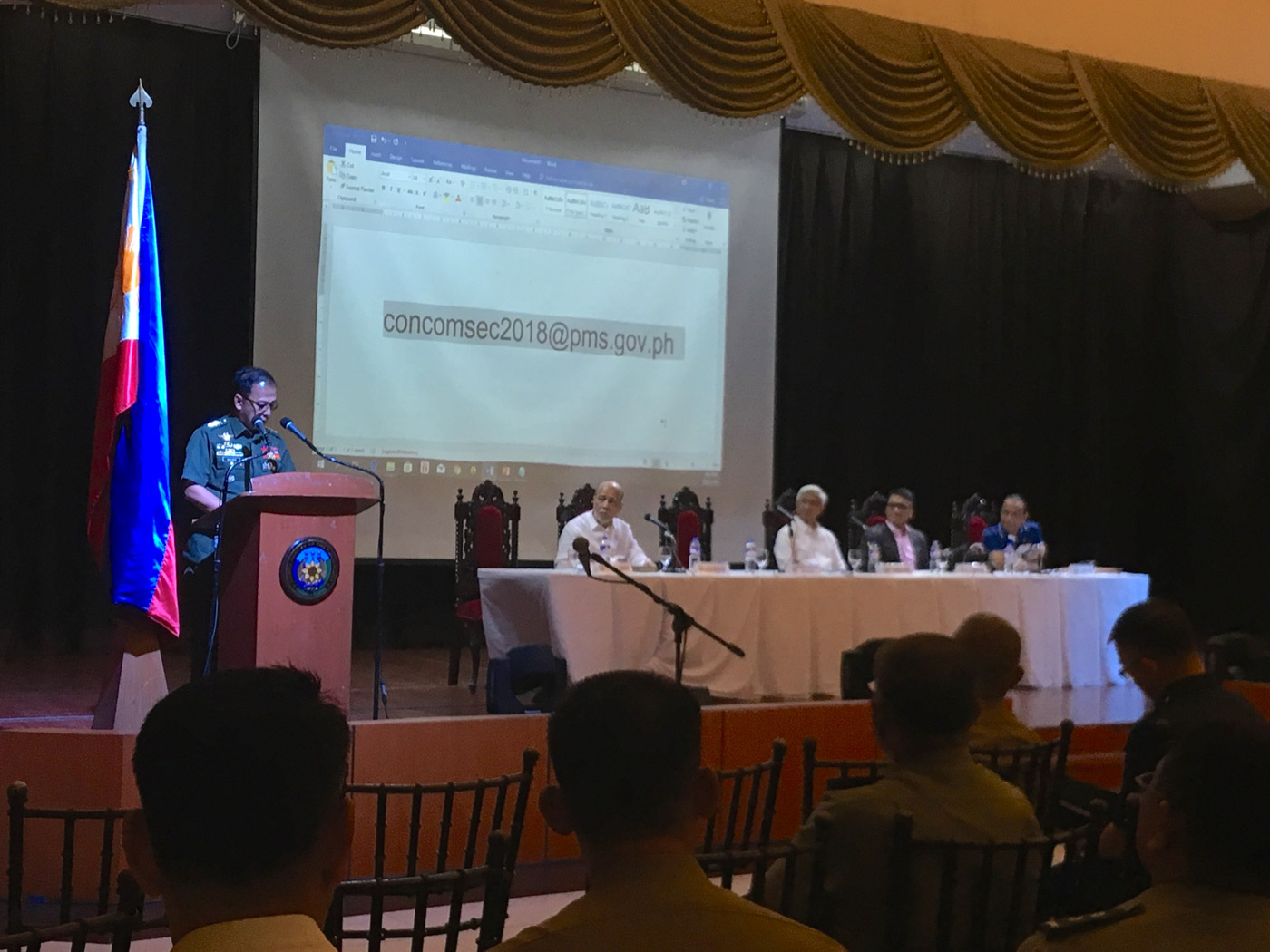 MANILA, Philippines (UPDATED) – The military rejected a provision in the proposed new constitution seeking to limit the conduct of electronic surveillance, setting the stage for a national debate on digital privacy in the country.

Armed Forces of the Philippines chief of staff General Carlito Galvez Jr on Thursday, July 5, said the constitution being “absolute”  should only tackle “generalities” and avoid discussing “operational matters” that could limit military actions.

Retired general Ferdinand Bocobo, one of the members of the 16-member committee, said there is a need to balance security concerns with the people’s right against unauthorized surveillance.

Electronic surveillance is a growing global concern in the wake of high-profile revelations on the scope of spying tactics employed by governments on citizens. In the United States, former Central Intelligence Agency employee Edward Snowden disclosed global surveillance programs with the cooperation of telecommunication companies.

The provision limiting electronic surveillance is only one of few items that Galvez wants reviewed in the draft charter already perceived to have widened the powers of the military. (READ: Con-com proposes adding ‘lawless violence’ as ground for martial law)

Galvez said he would create a group that would carefully study the draft by the ConCom for its possible impact on the security sector.

Bocobo said they would note the military chief’s comments before submitting the draft to Malacañang on July 9.

The committee seeks to expand existing constitutional protection from “unreasonable searches and seizure” to include conduct of “unlawful” and “unreasonable surveillance through technological, electronic or any other means in addition to the requirements for the issuance of a search warrant.”

Galvez – as most governments have – used security concerns to justify surveillance. He claimed the Human Security Act, which was meant to empower the government against terrorists, became “inutile” because of “too many restrictions” imposed by the law.

“We were forced to declare martial law just to institute immediate [actions] against violence in Mindanao,” Galvez said.

Bocobo said there may be an exception in the case of “high-profile” suspected terrorists, where surveillance warrants may be secured after military operations.

Galvez proposed that limitations on surveillance may be discussed in a law and not in the constitution.

Military being the ‘protectors of the people’

Galvez also rejected a proposal to delete a provision in the current constitution assigning the military as the “protector of the people,” saying it is an emotional symbolism that soldiers take to heart when performing difficult tasks that sometimes endanger their lives.

“It is my personal view to retain that provision. It is a noble mandate given to us. It makes us want to save the lives of the people. In times of disaster, we think about protecting and saving the people,” said Galvez.

Bocobo earlier said the phrase in the constitution was deleted because it had supposedly misled coup plotters in the past to destabilize governments.

“There is pride in being the protector of the people and the state. ’Yun ang gustong tanggalin na probisyon ng mga communists because napakaganda,” Galvez said. (That is a provision that communists want to remove because it’s beautiful.)

The ConCom was created to realize Duterte’s campaign to shift the country into a federal system, proposing 18 political regions that will have wider powers than what provinces currently enjoy. But the draft also has encompassing revisions in the country’s political, economic, and security systems. – Rappler.com