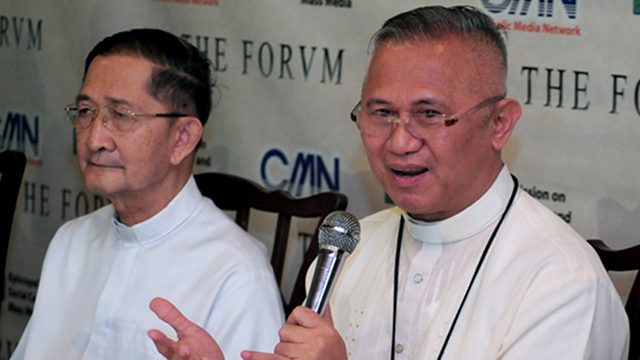 MANILA, Philippines (UPDATED) – Cebu Archbishop Palma was safe, and was on his way from Manila to Koronadal City, South Cotabato, when a shootout happened at the Cebu Archbishop’s Residence on Tuesday morning, July 10.

Palma appealed for calm after the shooting incident that killed the gunman, Jeffrey Cañedo, at the Cebu Archbishop’s Residence.

Villarojo said Palma, 68, attended the plenary assembly of the Catholic Bishops’ Conference of the Philippines (CBCP) that ended on Monday, July 9. The 117th CBCP plenary assembly was held from July 7 to 9 at the Pope Pius XII Catholic Center in UN Avenue, Manila.

Palma was scheduled to proceed to Marbel, now known as Koronadal City, for the ordination of Marbel Bishop-elect Cerilo Casicas on Wednesday afternoon, July 11, according to Villarojo.

The media liaison of the Archdiocese of Cebu, Monsignor Joseph Tan, also confirmed to Rappler that Palma was not in Cebu.

Tan said Palma was “coming back from the CBCP meeting” and was “en route to his next appointment.”

Villarojo said the last time he spoke with Palma was at around 1 pm on Tuesday.

It was Villarojo who told Palma about the shootout. Palma, in turn, requested him to issue a statement about the incident.

“He told me to issue a statement appealing for calm and to refrain from making any speculation about the incident because we are still awaiting the investigation by the police,” Villarojo said.

‘This is a first’

Tan said the Archdiocese of Cebu was shocked at the incident.

“This is a first. We never had something like this before. But we do not want to make it appear that this is like an organized threat, that the Church is under threat right now,” Tan said.

Tan said Palma “is in contact with the father of the deceased.”

In its official statement Tuesday afternoon, the Archdiocese of Cebu recalled that the suspect “was wanting to see the archbishop, who is currently in Manila.”

“The police was called after the man exhibited unusual behavior. The official police report will disclose the details based on their ongoing investigation. There is no known prior threat to the archbishop of Cebu,” the Archdiocese of Cebu said.

“We enjoin everyone to pray for the soul of the deceased even as we ask the public to refrain from forming any speculations relating to this incident pending investigation by the police,” it added.

“Let us make use of this incident as an occasion to pray for peace and conversion of hearts,” the archdiocese concluded.

It happened a day after the CBCP, after its 117th plenary assembly, delivered its strongest and most comprehensive critique of the Duterte regime. (READ: Catholic bishops slam abuses under Duterte, call for 3 days of fasting)

Palma, a former CBCP president, is himself one of the loudest voices against the spate of killings under Duterte’s watch.

On the same day that the CBCP ended its plenary assembly, CBCP president Davao Archbishop Romulo Valles met with President Rodrigo Duterte about the chief executive’s tirades against God and the Catholic Church.

Valles was celebrating his 67th birthday when the shootout happened on Tuesday.

Tan, however, said that until police confirm “the real identity” of the suspect, his history, and his motive, “we will not know how to deal with the situation fully.”

“We are hoping it’s an isolated case,” Tan said. – Rappler.com