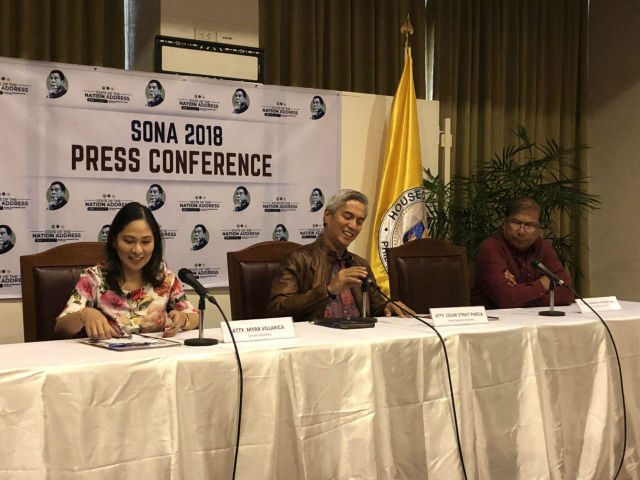 MANILA, Philippines – The head of security for President Rodrigo Duterte’s 3rd State of the Nation Address (SONA) is advising him to skip meeting with protesters after his speech on July 23.

Lieutenant General Roland Detabali, House of Representatives sergeant-at-arms, said on Thursday, July 12, they have been telling Duterte’s presidential escorts to give the same advice to the President.

“We’ve been talking to the presidential escort units, the security officers, [that] for the sake of the President and the country, they would advise him not to do what he did last year,” said Detabali in a press conference on the SONA preparations.

Last year, Duterte walked up to the stage that protesters set up outside the Batasang Pambansa shortly after delivering his 2nd SONA. The President, surrounded by his security personnel, spent around 13 minutes trying to talk to the protesters, who kept on interrupting him.

Duterte was not harmed during the incident.

Still, Detabali said the more than 6,000 security personnel to be deployed this year for the 3rd SONA are “preparing for anything.”

Around 6,000 cops and 600 soldiers are set to be deployed to various parts of Metro Manila on July 23 to ensure the safety and security of Duterte and all the guests attending his SONA.

On Thursday, the SONA preparations team announced that the Tagum City Chamber Chorale has been chosen to sing the national anthem during the SONA, as recommended by Speaker Pantaleon Alvarez.

Blockbuster movie director Joyce Bernal also inspected the venue for the first time on Thursday. She plans to capture “how much Duterte loves the Philippines” in her direction of the SONA. – Rappler.com