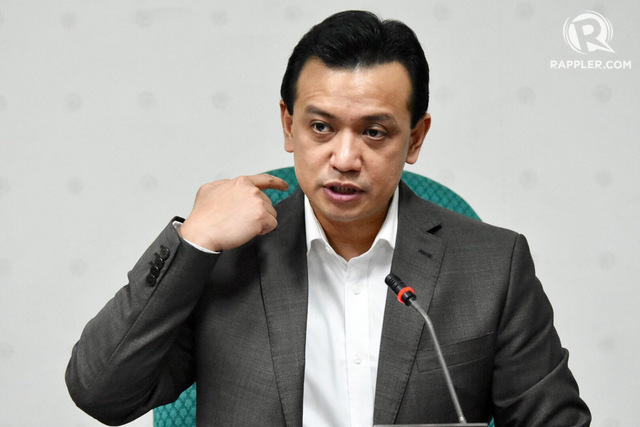 An opposition supporter first posted the information on Facebook, with Trillanes confirming it hours later at the opposition concert in Quezon City.

“Ni-recall daw sila (They were recalled)….As far as I know since end of June pa eh,” Trillanes told reporters.

Asked if there was a formal letter, Trillanes just shook his head.

Sources told Rappler that Trillanes’ office had requested to renew at least two of his police detail. The first request was already denied end of June while the other one is reportedly pending approval.

Trillanes told his supporters not to worry about him, saying he can handle himself.

“I’m a fatalist. I know God has a plan… Sa akin, ganito lang: Subukan lang nila. Kilala ko si Duterte by now. Duwag ‘yan,” he added. (For me, it’s like this: Let’s see if they will try to do it. I know Duterte by now. He’s a coward.)

Malacañang said on Saturday, July 14, that according to the PNP,  Trillanes still had 4 police escorts.

“Per PNP, two were removed as he already had 6 when he’s only allowed 4. Let’s allow our PNP to keep our communities safe please,” Presidential Spokesperson Harry Roque said in a statement released to the media.

On Sunday, July 15, Trillanes refuted the claim by the PNP and Roque that his security personnel were pulled out following the Alunan doctrine, which limits the number of a politician’s armed personnel.

In a statement on Sunday, Trillanes said: “I never had a security detail provided by the Senate. Which means that whatever is this Alunan doctrine is not applicable to me. Besides, if the intention is to disband private armies, a few AFP/PNP personnel can’t be classified as private army, precisely kasi nga police o sundalo sila (because they are police or soldiers) and they are controlled by their respective units.”

Trillanes is one of the fiercest critics of President Rodrigo Duterte since the 2016 presidential campaign. He accused Duterte of having billions in secret bank accounts, as well as involvement in smuggling and other alleged crimes. The President has denied it. – with a report from Mara Cepeda/Rappler.com