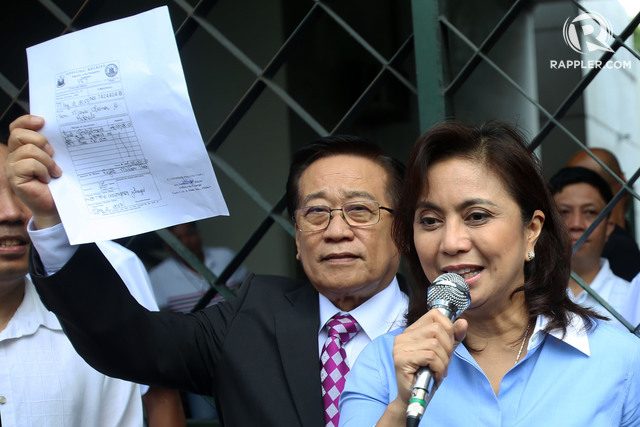 Veteran election lawyer Romulo Macalintal filed the Robredo camp’s counter-manifestation on Calida’s manifestation before the SC, which is acting as the Presidential Electoral Tribunal (PET) in the election case that ex-senator Ferdinand “Bongbong” Marcos Jr filed against the Vice President.

He argued that Calida “has no personal knowledge” to conclude that the 50% shading threshold must be used, as no one from the Office of the Solicitor General (OSG) observed the ongoing revision, recount, and re-appreciation of ballots.

“Thus, the OSG has no basis to once more make a reckless conclusion that the application of the 50% threshold percentage does not disenfranchise the voters,” said Macalintal.

But Robredo is appealing to the PET to lower the ballot shading threshold to 25%, as she argued that this was the threshold set by the Commission on Elections (Comelec) during the 2016 polls.

On July 4, Calida filed a manifestation before the PET to say that he supports the 50% shading threshold, favoring his ally Marcos and in effect dropping the poll body.

On July 10, the PET merely took “note” of Calida’s opinion. It also granted his request that the Comelec be given another 10 days to file its comment on its own.

Still, Macalintal said the OSG is “taking a dangerous position where the results of the elections will be changed by way of an election protest.”

“Simply put, OSG is now providing a venue for losing candidates to disregard the sovereign will of the electorate by applying different rules from those adopted and used during the elections by Comelec. This simply must not be done,” said Macalintal.

“This erroneous position taken by OSG will erode the very foundation of our democracy. The whims of one person cannot outweigh the overwhelming choice of the electorate,” he added.

The Makati Business Club (MBC) previously urged the PET to apply the 25% shading threshold in the recount.

“Inconsistent application of the rules will be a blow to the credibility of elections not only for the position of Vice President but for all other elected positions. Political stability and consistency in the laws, regulations and policies are the cornerstones that have produced the business confidence, job creation and strong growth of recent years,” said the MBC.

Read a full copy of the Robredo camp’s counter-manifestation below: