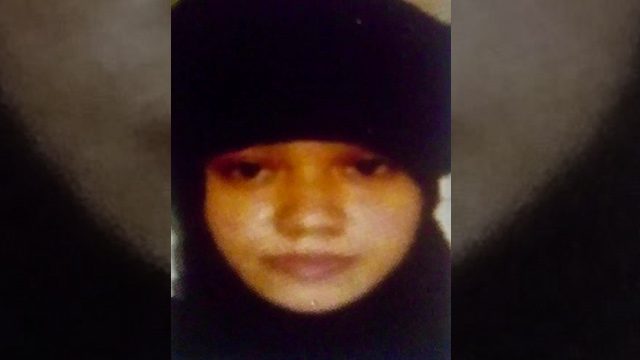 Facebook Twitter Copy URL
Copied
Nafisa Pundog, identified by authorities as the wife of Abu Dar, has a standing warrant of arrest for allegedly possessing a blasting cap/incendiary device

The capture was announced on Monday, July 16, through a report sent by Eastern Mindanao Command spokesperson Major Ezra Balagtey to defense reporters.

According to Balagtey, they were led to Nafisa Pundog by first pursuing a certain Najib Calimba Pundog, an alleged explosives expert branded by the AFP as a “terrorist.”

Najib Pundog was killed when he allegedly fought back as he was served with a warrant of arrest by cops and soldiers in Barangay Fatima in General Santos City at around 2:15 am.

Government forces got a tip “from the community” through a followup operation at around 7 am, leading them to Nafisa Pundog.

According to the AFP, Pundog used to be a prisoner, escaping the Marawi City Jail in 2016 before the siege erupted in May 2017. She has a standing warrant of arrest for allegedly possessing a blasting cap/incendiary device.

Her husband, Abu Dar, was named by the AFP as the new emir of ISIS Southeast Asia in March 2018. – Rappler.com

*Police and military reports currently have varying spellings of Pundog’s name, with some spelling it as Pundug. We used the spelling provided by the military.