The vessel is used for tracking and support of satellite and intercontinental ballistic missiles, according to tracking web sites. It is not clear if the vessel is attached to a civilian agency or to the military.

A source at the harbor in Davao confirmed that the vessel arrived at 9:40 pm on Monday. It is expected to stay in Davao until July 19, the source said, adding that it secured permit in Manila. 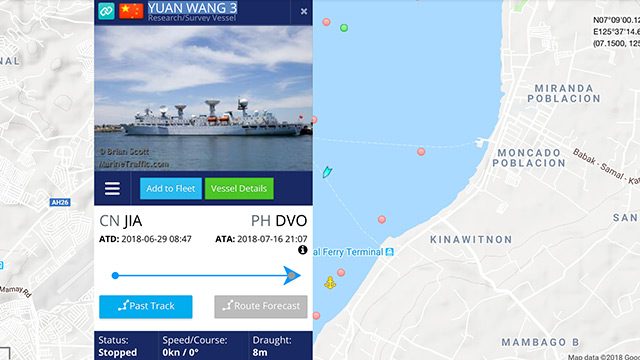 Defense Secretary Delfin Lorenzana also confirmed the arrival of the Chinese vessel in Davao. “Yes. We know about it. The Chinese ambassador wrote to the Secretary of Foreign Affairs [Alan] Cayetano that it would be docking in Davao to refurbish, and it was allowed to do so,” Lorenzana told Rappler.

The Philippine Navy said the visit is “routine” and “nothing unusual.”

“They are here for a  replenishment, as granted by the diplomatic clearance issues by higher authorities. This is a routine ship visit similar to any other foreign ship wishing to call on our ports,” said spokesman Commander Jonathan Zata.

“We had Chinese warships calling on our ports in the past the same as with any other warships from other countries,” said Zata.

Magdalo Representative Gary Alejano, a former navy officer, told Rappler he was also informed of the arrival of the survey vessel. He said the vessel initially couldn’t dock and had to wait before its clearance was issued. Based on an old report on the Philippine government news site, Yuan Wang 3 also docked in Davao in August 2010. It drew suspicion because the “crew members refused to allow media members and some officials of the Bureau of Customs to enter the vessel.”

The arrivals of Chinese assets in the Philippines have raised concerns, given Duterte’s warming ties with Beijing, especially after the back-to-back landing of Chinese military cargo planes in June without prior public announcements.

Senate has sought an inquiry into the arrival of Chinese military planes in the Philippines. The Philippines has visiting forces agreements with only two countries, the United States and Australia.

The Chinese Coast Guard has practical occupation of Panatag (Scarborough) Shoal since 2012 after a tense standoff with the Philippines. Duterte has arranged to allow Filipino fishermen back in their traditional fishing ground, but China appears to exercise control.

In the Kalayaan Group of Islands (Spratlys) in May, Chinese vessels also harassed Filipino troops on a resupply mission to Ayungin (Second Thomas) Shoal.

In 2017, Chinese survey vessels were discovered zigzagging Benham Rise, prompting concerns from the defense department that it was conducting unauthorized research on Philippine waters. Despite this, the Department of Foreign Affairs allowed China to survey the maritime territory in January.

Duterte refused to implement the country’s victory in an international arbitration court against China’s 9-dash-line claim over the South China Sea. He rejected direct confrontation with Beijing and chose warmer ties with Beijing in favor of economic investments.

Critics slammed Duterte for surrendering the country’s claims over the disputed waters.