MANILA, Philippines (UPDATED) – Despite a general decline in survey ratings, President Rodrigo Duterte has managed to maintain a high level of popularity in his two years in power. Doubts, however, have been cast on some of his policies.

The just-released 2018 second quarter surveys by Social Weather Stations and Pulse Asia give a clearer picture of how the public has perceived the firebrand Duterte with two full years of his presidency behind him.

In this article, Rappler looks closely at Duterte satisfaction and approval surveys done by the two pollsters from September 2016 to June 2018 – all 8 surveys by SWS and Pulse Asia during the Duterte presidency so far. We also relate these to surveys on issues critical to the Duterte administration: the campaign against illegal drugs, foreign policy, and charter change. 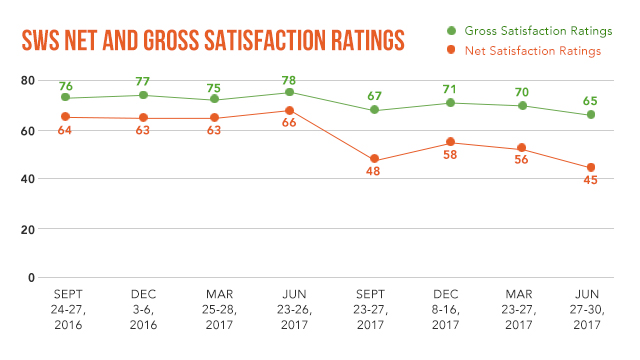 “I would emphasize that he is still in a honeymoon,” Rood told Rappler.

Any talk about, ‘Wow! He’s got such a great honeymoon,’ is an exaggeration.

Though he has kept his honeymoon period, Duterte still suffered a general decline in satisfaction ratings.

While this is a good show for Duterte, Mangahas said it’s nothing out of the ordinary.

“Any talk about, ‘Wow! He’s got such a great honeymoon,’ is an exaggeration. We Filipino people are generous and we’ve been generous not only to him but to others also,” Mangahas told Rappler in an interview.

As of June 2018, Duterte has surpassed Joseph Estrada’s honeymoon period of one year and Gloria Macapagal Arroyo’s non-existent one, but he is yet to beat the record of Benigno Aquino III with his record 3 years and 3 quarters honeymoon period.

“Duterte is still quite far from that. Let us wait. But he has not even matched Fidel Ramos,” said Mangahas.

It’s the SWS surveys that show dips in public perception of Duterte. The most marked decline was from the June 2017 survey to September 2017 survey. Duterte experienced an 11-point drop in gross satisfaction – from 78% to 67%. This led to a downgrade from “very good” to “good.”

It was around this time when outrage over teenage deaths in anti-drugs police operations came to a head, combined with rallies marking the anniversary of Marcos-era martial law. Kian delos Santos was shot to death in a dark alley in Caloocan on August 16. This was followed by the deaths of two more youths: 19-year-old Carl Arnaiz and 14-year-old Reynaldo de Guzman.

Such was public anger over the incident that Duterte made a rare statement against his anti-drugs campaign. He promised policemen responsible would “rot” in jail and declare he doesn’t condone the killing of youths.

Days before the SWS survey was conducted, several activities and protests were held to commemorate the 45th anniversary of Marcos’ martial law. Groups also used the events to protest extrajudicial killings and Duterte’s so-called looming dictatorship.

But come December 2017, Duterte’s net rating was back to “very good” at 58+. Mangahas attributed Duterte’s recovery to the end of the Marawi siege, which the President announced in mid-October.

“By December, when Marawi was at last recovered, then he recovered a lot also,” he added.

Crises like the Marawi siege is the type of catastrophe that helps, not harms, leaders.

“In the event of armed conflict, the people tend to rally around the leader,” said Mangahas.

But come June 2018, another kind of crisis would test Duterte’s popularity – this time, a crisis of his own making.

On June 22, Duterte called God “stupid” and disparaged tenets of the Catholic faith in a speech aired live. Duterte and his advisers, sensing the immediate backlash, formed a 4-man committee to dialogue with religious groups but not before SWS recorded an all-time low in public satisfaction – a gross satisfaction rating of 65% and a net rating of +45.

SWS survey results prove Duterte is not exempt from the usual pattern of decline experienced by presidents before him. 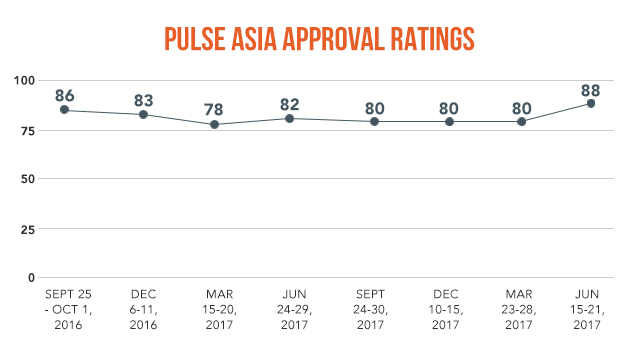 It’s a different story with Pulse Asia. If SWS found dips and a general decline, Pulse Asia’s approval and trust survey results show Duterte generally maintaining his high score and then even rising slightly toward the end of his second year.

He maintained [his ratings]. It’s exceptional.

His June approval rating of 88% even surpassed his 86% approval rating recorded just a few months into his presidency in September 2016. This means he recovered from his dip in March 2017 (78%). That dip coincided with the Congress hearings on the Davao Death Squad where self-confessed hitman Arthur Lascañas accused Duterte of masterminding assassinations during his mayorship.

The same pattern was observed in his trust ratings. His latest 87% trust rating (June 2018) is a recovery of his very first trust rating of 91% in July* 2016. A change in ratings must be at least 7 percentage points for it to be significant, Pulse Asia chief research fellow Ana Tabunda told Rappler.

Duterte’s Pulse Asia ratings initially mirrored those of Benigno Aquino III, but the end of his second year showed him doing better than his predecessor, said Tabunda.

“He maintained [his ratings]. It’s exceptional. We expected things to go down. The trend was [for the ratings] to go down slightly. His is not. It’s straight,” said Tabunda.

While Aquino eventually recovered to a 78% approval rating in his 8th survey, Duterte garnered a new high of 88% in June. In his two years, Duterte has kept his scores within the high-70s to high-80s.

Duterte has succeeded in retaining his popularity by quickly putting out fires, weighed in Tabunda. He immediately responded to controversies directly affecting him, often in a characteristic over-the-top, attention-grabbing manner. One example is his frequent firing of allegedly corrupt government officials.

“There were problems with Paolo [Duterte], Paolo had to resign. [Former justice secretary] Aguirre had problems, he had to resign. Duterte is quick. It doesn’t get to him,” said Tabunda.

This observation is consistent with SWS findings where Filipinos gave Duterte a score of “good” (+45) in eradicating graft and corruption.

Tabunda said most people no longer follow news of sacked officials getting reappointed, a gaping hole in Duterte’s “one whiff, you’re out” policy.

Combine Duterte’s quick response time with a “marginalized” opposition and majority public approval of his campaign against illegal drugs and you have a recipe for sustained popularity.

Because he is perceived to be delivering on this promise, many Filipinos are willing to cut him some slack on his other promises.

“It’s a question of, how long am I willing to wait for my regularization and still it’s not forthcoming and yet I’ll give him my support because he has done these things,” illustrated Tabunda.

While SWS and Pulse Asia results differ on many points, they agree that Mindanao’s support for Duterte is unprecedented.

The southern region consistently saves the day for Duterte whenever other regions thumb him down.

“No president can compare with Duterte in Mindanao. It’s significant. It’s the one pulling up his scores. Even if Balance of Luzon dipped, even if [the Mindanao sample size] is smaller, his score was so high it pulled everything up. That’s the advantage Duterte has,” said Tabunda.

Mindanao has given Duterte a grade of “excellent” in all SWS satisfaction surveys so far, though there was a 9-point decline from the first survey (+85) to the latest in June (+76).

This is mirrored in Pulse Asia approval polls, where Mindanao bequeathed him ratings in the high-80s to 90s, and even a spectacular 99% approval rating in June.

But Duterte should take note of the growing dissatisfaction in Mindanao for his Cabinet, Congress, and the Supreme Court, reported in a March SWS survey. Dissatisfaction with the government, while so far not affecting his personal ratings, could catch up with him eventually.

Then in June, SWS found that fear of robbery, unsafe streets, and presence of drug addicts rose in Mindanao, despite Duterte’s martial law in place there. This might indicate that Duterte’s fight against crime may be flagging in his home region.

There are interesting stories in the other sub-groupings too.

In SWS, net satisfaction ratings across all areas declined since the start of Duterte’s presidency. The 24-point drops in Manila and Balance of Luzon are particularly significant as these led to a decline by one whole grade – from “very good” in September 2016 to “good” in June 2018.

Another notable plunge was observed among Filipinos living in cities. Urban net satisfaction ratings took a 25-point dive from the start of Duterte’s term to the end of his second year (+63 in September 2016 to +38 in June 2018).

As for economic classes, the large swathe of Class D Filipinos are significantly less satisfied with him, as indicated by the 22-point drop (+65 in September 2016 to +43 in June 2018).

There was also a decline among the poorest, Class E. But there was an uptick in satisfaction among the richest Filipinos, Class ABC. Satisfaction rose by 10 points from September 2016 (+56) to June 2018 (+66).

Class D, which make up the bulk of the population, and Class E are most affected by Duterte’s drug campaign, with police operations often conducted in their communities.

Duterte may be popular now, but his troubles are far from over if surveys on other key issues of his administration are any indication.

Surveys on federalism, foreign policy, and the drug war are warning signs Duterte should heed.

SWS and Pulse Asia polls consistently report that a big majority of Filipinos reject federalism and few even know what it’s all about. The shift to a federal system of government is one of Duterte’s main campaign promises.

Surveys also show Filipinos don’t agree with Duterte’s approach to China and his handling of the West Philippine Sea.

Another Pulse Asia survey showed that the United States, Japan, and Australia are still the countries most trusted by Filipinos at a time when Duterte pivots toward China (Filipinos’ 4th most trusted).

Mangahas thinks Duterte’s China approach may backfire on him.

“The failure to claim our resources in the West Philippine Sea, eventually, that’s going to boomerang, I suppose. I don’t know how long it will take, but the policy of giving way to the big bully cannot be working,” he told Rappler.

“How is he going to convince the public that the Chinese are trustworthy? You have to look at the whole scheme. The foreign policy is definitely not supported,” he added.

As for the anti-drugs campaign, while there is generally majority support for it, Filipinos also have nagging doubts. Despite general approval and satisfaction, surveys found that half of Filipinos don’t believe police claims that suspects “fought back.” Most Filipinos think suspects should be arrested alive. Most Filipinos worry about extrajudicial killings. Most Filipinos fear that they or their neighbors could be the next EJK victims.

It could take only one more major drug war controversy, similar to the teenage deaths, to make Filipinos reconsider their support for the campaign.

Duterte’s personal popularity will be tested as he embarks on his 3rd year in power, the halfway mark. Will his charisma and political will see him through controversy after controversy? Or will the public’s unanswered doubts about his policies drag him down? – Rappler.com