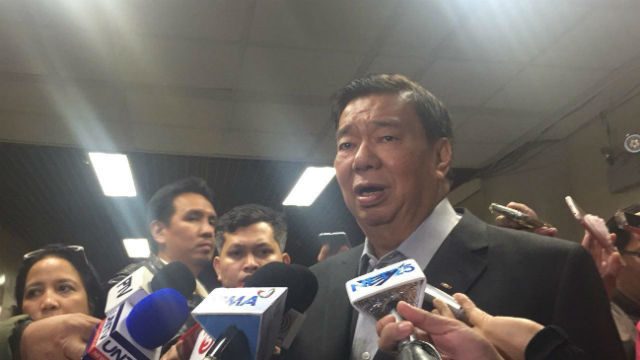 “The Bangsamoro Basic Law, which we are about to finish today, is proof that we do not need federalism or amending the Constitution in order to achieve the self-governance or the benefits of federalism that is being presented to the people. Why? The BBL grants self-governance,” Drilon told reporters on Wednesday, July 18.

“It’s clear we do not need a federal system to achieve what we want to do. And the present Constitution allows the alleged benefits of federalism to be done by legislation,” he added in a mix of English and Filipino.

The opposition senator granted a media interview before the bicameral conference committee on the BBL continued its deliberations on Wednesday afternoon. The bicam, which was still sorting out issues over the plebiscite and preamble provisions, aimed to finalize the BBL draft by 4 pm.

According to Drilon, the proposed BBL identifies 55 powers of the Bangsamoro, the new and more powerful region that would replace the Autonomous Region in Muslim Mindanao.

These include fiscal autonomy, devolution of health, urban land reform, the Bangsamoro justice system, control over free ports and economic zones, the power for administrative reorganization, and creation of government-owned and -controlled corporations, among others.

(Under the bill we’re drafting, the block grant pegged at P60 to P70 billion would be automatically released. This cannot be reduced. We cannot impose where it would be used. Only the Bangsamoro government would have the power to determine where the money would be appropriated.)

President Rodrigo Duterte’s government continues to push for federalism even as surveys conducted by Pulse Asia Research Incorporated and the Social Weather Stations say that a majority of Filipinos are opposed to the shift.

The Constitutional Commission already gave both houses of Congress copies of their draft federal charter, which proposes a federal-presidential form of government creating 18 federated regions, including federated regions of the Bangsamoro and Cordillera. (DOCUMENT: Con-Com draft constitution submitted to Duterte)

Duterte had argued federalism would decentralize power and wealth away from Imperial Manila and further empower the rest of the regions. But Socioeconomic Planning Secretary Ernesto Pernia regions are not ready for the shift to a federal system of government at this point in time. – Rappler.com