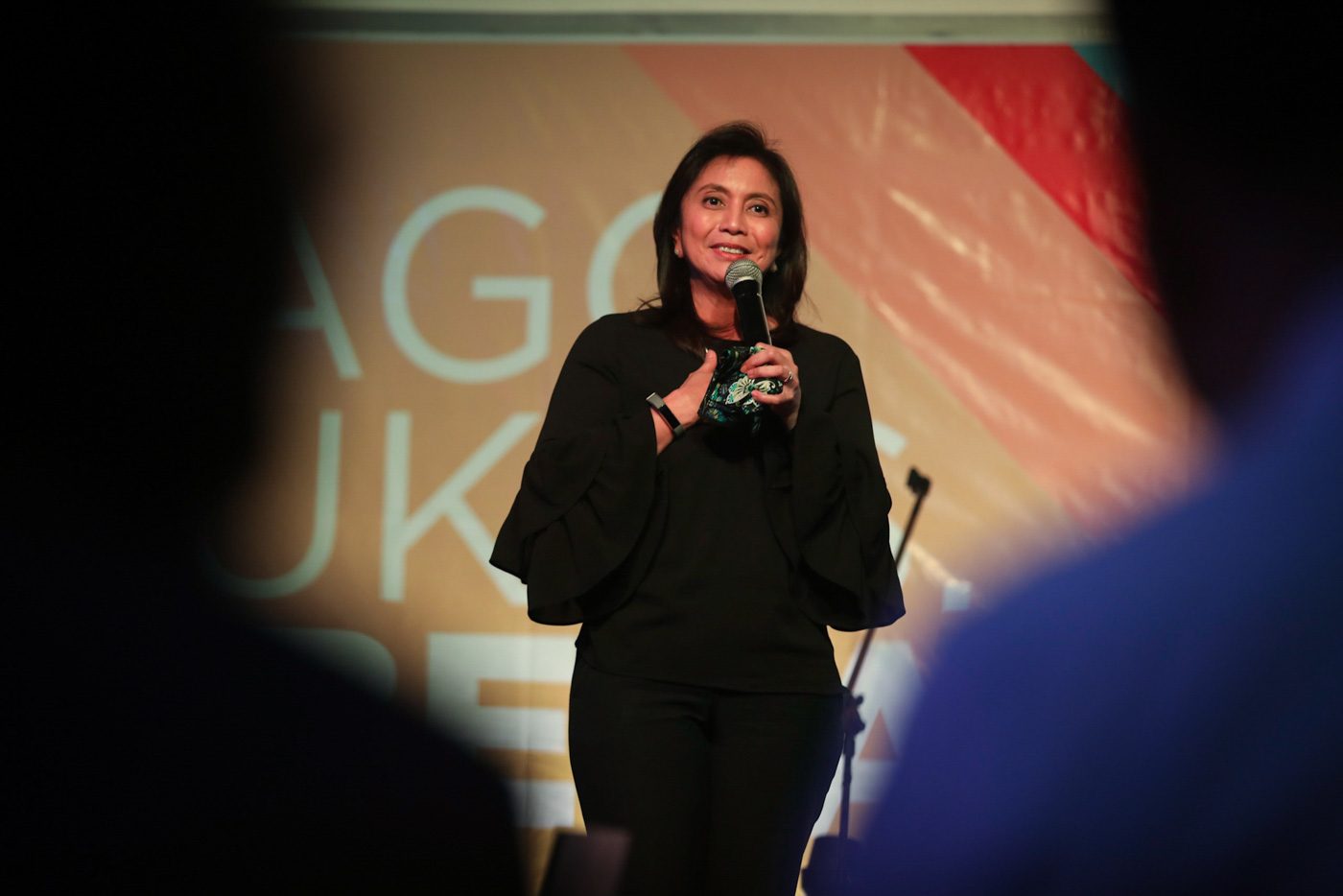 Facebook Twitter Copy URL
Copied
The Vice President will not oppose just anything and everything about the Duterte administration, but she will be the unifying force of dissent

MANILA, Philippines – It was clear from the beginning that Vice President Leni Robredo was going to be the beacon for the opposition. In 2016, during the homestretch of the campaign, she told 4 traditional male politicians she would be the last woman standing among them.

Holding the second highest position in the land, she launched the anti-poverty program “Angat Buhay” (Improve Lives) for those on the “laylayan ng lipunan” or fringes of society. She told an international audience that President Rodrigo Duterte’s bloody drug war had left Filipinos “hopeless and helpless,” that the young, the innocent, and the poor were dying.

But a year ago, people back home were not willing to listen.

Robredo drew flack for criticizing the war on drugs. Her trust and performance ratings dipped. Administration supporters, among them Speaker Pantaleon Alvarez, threatened to impeach her. It did not matter to them that the Vice President had resigned from the Cabinet months before.

The political climate was too volatile for the woman whose vice presidency was already being challenged in an electoral protest.

But times have changed. The economy is worsening, the prices of goods are rising, and Duterte just called God “stupid” in predominantly Catholic Philippines. The people are more open to questioning the status quo.

It was the perfect opportunity for Robredo to accept the call to lead and unite the opposition.

(A lot of our countrymen are saying they need a leader, but I have also been saying it is the obligation of all of us to express what we feel. It is our obligation to oppose what needs to be opposed.)

(But now, it is becoming apparent that the people will be more courageous to speak up if there is another group that shares his beliefs. And that’s the role I want to take, to unite those voices.)

Lawyer Barry Gutierrez, Robredo’s legal adviser and now her spokesperson, believes the Vice President saw there was a “stronger pushback” from ordinary citizens.

“And right now, it’s not just a case of promises have not been fulfiflled. It’s actually a case of things have gotten worse by a huge margin. I think she’s also responding to that. This is the time for her. She’ll have a more receptive audience to a message,” he added.

There was a palpable feeling of relief among Robredo’s supporters when she finally categorically told the public she is the opposition leader. Key opposition figures, like staunch Duterte critic Senator Antonio Trillanes IV, called it a “morale boost.” But Robredo’s announcement raised eyebrows, too: why only now?

Senator Francis Pangilinan, one of Robredo’s advisers from the Liberal Party (LP), came to her defense.

“There are two things I’d like to share, one from what I’ve learned in farming: everything has its season – Time for planting, time for waiting, and time for harvesting,” explained the opposition senator.

He and the Vice President share the belief the starting point for a genuine opposition movement is not a Messiah figure; it stems from the people.

“The opposition, as is the administration, is not a monolithic entity. To assume that is a big mistake. To expect that one individual will be the Messiah that will deliver us from Evil is not what democracy or even freedom is about. This penchant of focusing on personalities in our politics is precisely what has led us to where we are today,” said Pangilinan.

“Democracy involves everyone – you, me, Mang Juan, Aling Ising. The individual citizen is the most important part of that noisy, roundabout process we call democracy,” he added.

Opposition ripe to be united

Different groups opposing Duterte’s policies are more willing to unite now, making it even more fitting for Robredo to step up for them.

The opposition movement has been criticized to be catatonic, failing to capitalize on the government’s controversies to solidify their standing.

On June 12, Tindig Pilipinas held its biggest general assembly yet since launching in September 2017. The star of the program was newly-ousted Supreme Court chief justice Maria Lourdes Sereno, whom the LP is courting to run for senator.

Robredo was nowhere near this gathering. But 3 days later, Gutierrez said, officials from LP, Tindig Pilipinas, Akbayan, and Magdalo met with the Vice President. The possible choices for the opposition slate were discussed. It was also during this meeting that Gutierrez himself asked Robredo if she would become their leader, be the stronger voice for them. As opposition leader, Robredo will continue opposing human rights abuses, state-sanctioned killings, and the ongoing push for charter change. She will keep on defending the country’s sovereignty in the face of the Duterte government’s inaction over the West Philippine Sea.

The Vice President is also expected to criticize economic policies that hurt the poor, who personally tell her about their woes whenever Robredo visits their communities through Angat Buhay.

But what about other issues? The Vice President said she still needs to meet with other opposition groups to iron out these details. The left-leaning Makabayan lawmakers already said they are open to back Robredo, as she is also against tyranny like them.

One thing that always made Robredo pause was the question of whether or not she was the right person for the job.

“It’s always been less about her personally and her own preferences. It’s been about her own understanding of how the cause is best served – ’yong sinasabi niya na makakatulong ba ’ko kung ako ’yong nagsasalita rito. Makakatulong ba talaga if I would be the one to take the lead?” said Gutierrez. (She always wonders if she would be able to help the cause if she speaks up. Would it really help if I would be to take the lead?)

Robredo herself is aware of detractors who argue she only criticizes Duterte so she could replace him as President.

But for Pangilinan, the fact that Robredo is not aspiring to be president is precisely the reason why she should lead the opposition in the first place.

“Leaders create more leaders. And especially in these times, we need as many leaders – men and women, young and old – as possible,” said Pangilinan.

“VP Leni herself recognizes that we have many opposition leaders and that nobody has a monopoly of leadership. She is willing to work with other leaders both in and out of government who believe in the need for a stronger opposition and to help provide the needed check on the executive department,” he added. Her family, too, remains a crucial factor whenever Robredo makes any political decisions.

The Vice President, her late husband interior secretary Jesse Robredo, and their 3 daughters Aika, Tricia, and Jillian have been on the receiving end of the most vicious attacks online.

Robredo was even accused of masterminding the tragic death of Jesse – the man whose ashes she and her kids keep in tiny capsules hung around their necks as pendants.

“You start to realize na kung importane ’yong pamilya niya sa tao, do you really want to subject her to that again? ’Yon ’yong nagiging dilemma ng mga taong malapit sa kanya sa team niya,” said Gutierrez, who admitted to being one of the people who had long pushed Robredo to be a more aggressive government critic.

(When you start to realize just how important her family is to a person, do you really want to subject her to that again? That’s the dilemma of the people in the team who are close to her.)

But Robredo knew what she was getting into the moment she agreed to be LP’s vice presidential bet in 2016.

Much like her journey during the campaign, Robredo’s acceptance of the opposition leader role was a long and winding process. (READ: Becoming Leni Robredo)

Ultimately, Robredo decided to put a stop to the lies being spread about her and her family, and placed herself at the forefront of the opposition movement.

On April 24, the Vice President used her personal social media accounts to lambast former journalist Rigoberto Tiglao, who used his Manila Times column to link her and LP to a European Parliament resolution that called on the Philippines to end extrajudicial killings due to the war on drugs.

Robredo then instructed her team to unearth every single false information about her online. She addressed each and every lie in a two-part video series after discussions with her advisers.

Gone are the days the Vice President will chose to ignore the “fake news” about her.

A voice of dissent

For now, it remains to be seen just how gutsy of an opposition leader Robredo will be.

After releasing a string of statements opposing the recent spate of political killings and the push for a federal shift, and commenting on the Gilas Pilipinas-Australia brawl, the Vice President has mellowed down again.

Two days after announcing her bid to unite the opposition, she urged Filipinos to “peacefully protest” China’s militarization of the West Philippine Sea. She also told Duterte to fix the economy after he called her incompetent.

But Robredo also refused to give a statement when she attended an anti-charter change youth concert on July 13, the first opposition-led event she attended since her July 10 announcement.

Gutierrez is also unsure the Vice President would even go as far as attending anti-Duterte rallies. But if there is one thing Robredo has taught her supporters in the past two years, it is this: she will stand up when called and fight the battles worth fighting for.

(Perhaps I don’t speak up on all issues, and I only pick what I comment on. But for me, it’s important for you to understand it’s not about alliances here. If you’re wrong, I’ll tell you. If you’re right, then I’ll agree with you.)

Will Leni Robredo ever lock horns with Duterte himself? The country – her critics, most especially – watch her with bated breath. – Rappler.com