War on drugs most important achievement of Duterte – Pulse Asia 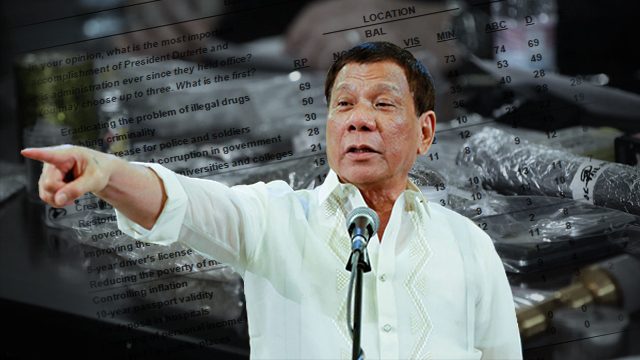 MANILA, Philippines (UPDATED) – To a sizeable majority of Filipinos (69%), the efforts of the Duterte administration to eradicate illegal drugs in the country is its “most important achievement,” results of a Pulse Asia survey conducted from June 15-21, 2018 showed.

Released on Monday, July 23, the day President Rodrigo Duterte is delivering his State of the Nation Address, the survey showed that this is the majority opinion in all geographic areas and socio-economic classes. The sentiment is highest in Metro Manila (77%) and among the rich or ABC classes (74%).

Fighting criminality comes in second at 50% nationwide. Among geographical areas, 61% in the National Capital Region agree that efforts to beat crime have been an accomplishment, but the sentiment is lowest in Duterte’s home region of Mindanao (44%). An almost equal number agree from Classses E (54%) and ABC (53%). See Table 2 below: 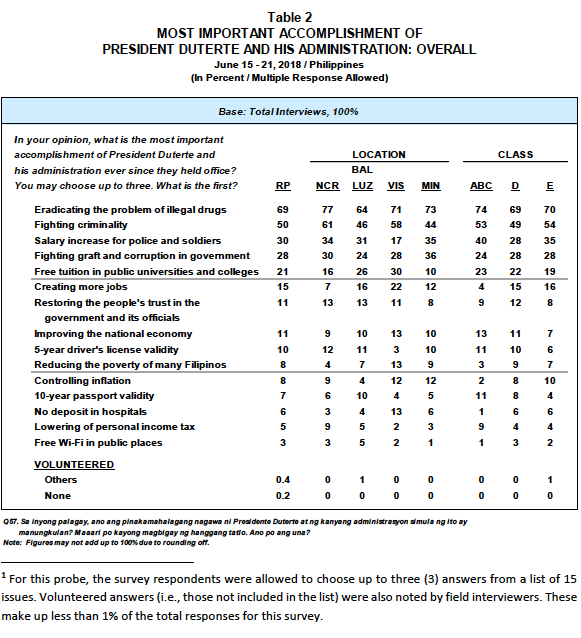 The salary increase for police and military personnel (30%) and the fight against graft and corruption (28%) are the next most important accomplishments of Duterte and his administration since assuming office. 21% said it’s the grant of free tuition to students enrolled in public universities and colleges.

Efforts to create more jobs (15%), restore public trust in government and its officials (11%), improve the state of the national economy (11%), and extend the validity of drivers’ licenses (10%) were also recognized as accomplishments. Least often mentioned were poverty reduction (8%), inflation control (8%), extension of the validity of passports (7%), no-deposit policy in hospitals (6%), lowering of personal income tax (5%), and provision of free internet in public areas (3%).

In his address, a majority said the President should emphasize the creation of more jobs (56%) and the need to control the rising prices of basic commodities (52%).

The sentiment about jobs is strongest in the Visayas (65%) and Metro Manila (56%), followed very closely by the rest of Luzon (55%). It is also strongest among Class D, and felt strongly by the poor or Class E. (See Table 3)

Most Mindanawons and those in Class ABC or the rich are also in favor of the President highlighting efforts to control inflation (56% and 68%, respectively). Other issues that Filipinos nationwide want Duterte to emphasize during his SONA are: improving or increasing the pay of workers (48%), further reducing the poverty of many Filipinos (33%), ending contractualization (27%), and continuing the fight against illegal drugs (26%).

Very few believe he should highlight federalism (only 5%) and charter change (3%).

Across socioeconomic groups, awareness is highest among Classes ABC (88%), followed by Class D (84%) and Class E (74%). Only 17% of Filipinos have “not heard, read, or watched anything about the previous SONAs delivered by the President before Congress,” Pulse Asia said.

The Pulse Asia survey was conducted using face-to-face interviews with 1,800 registered voters aged 18 and above. It has a ±2% error margin at the 95% confidence level. The error margin for Metro Manila is at ±6%, ±3% for the rest of Luzon, and ±5% for each of the Visayas and Mindanao.

At the time of the survey, major stories that dominated the news included the following: the arrest of more than 7,000 loiterers or “tambays” in Metro Manila, the start of regional consultations on the draft federal constitution, calls for a wage increase given the continuing increase in oil prices and the depreciation of the peso, and statements on the suspension of the tax reform law doing more harm than good. – Rappler.com