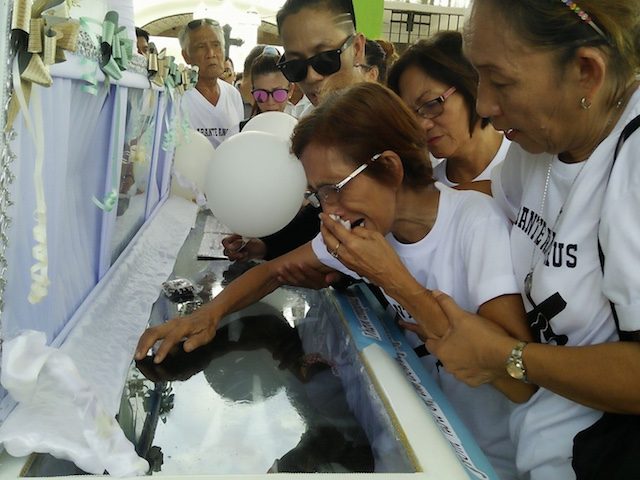 Facebook Twitter Copy URL
Copied
Nearly a week after Joey Llana was gunned down, there are still no witnesses or leads in the case

ALBAY, Philippines – Hard-hitting radio broadcaster Joey Llana was laid to rest on Thursday, July 26, nearly a week after he was gunned down in Daraga town in this province.

During the funeral procession from Daraga church to the Daraga Catholic Cemetery , Llana’s family and friends held up a black streamer demanding justice for the slain mediaman.

Llana’s younger sister Menchie took time off from her work in Singapore for the funeral. She said the family was not only in pain but was also angered by their brother’s death.

“We’re seeking justice and want the perpetrators to be put behind bars in the soonest time. Losing our elder brother who acts as head of our family is very painful. We’re so angry,” she said.

The Philippine National Police (PNP) in Bicol still has no leads in the case. In a news briefing, PNP Bicol director Chief Superintendent Arnel Escobal assured the Llana family that the police are doing what they can to pin down the killers.

“Until now, we don’t have any witnesses to Joey Llana’s killing but we’re doing whatever we can slowly but surely. We’re just waiting for crime lab result. We’re waiting for the breakthrough to solve the case immediately but we want to make sure and we’re looking closely at the pieces of evidence,” Escobal said. In an interview after the burial rites, Egco said the presumption is that Llana’s death was related to his job, especially as he was a “hard-hitting” broadcaster. (READ: Bicol bishop slams broadcaster’s slay: ‘Voice of truth will never be stifled’)

Egco, a journalist prior to his appointment in the PCOO, also reiterated his call for media to close its ranks amid the killings.

“The number one thing we have to do is to unite, to close ranks. With one voice let’s declare our unity against dirty politics and corruption. Those two, when they mix, are super deadly,” he said.

Albay Governor Al Francis Bichara condemned the killing and cited its chilling effect on the media.

“In no uncertain terms is killing justified under any circumstances, more so that Llana was a member of the media. The killing of a journalist has a chilling effect on the freedom of speech. The muzzling of a free press is anathema to democracy,” Bichara said.

The PNP, PTFoMS, National Union of Journalists of the Philippines, and the Kapisanan ng mga Brodkaster ng Pilipinas are working closely on the Llana case. – Rappler.com