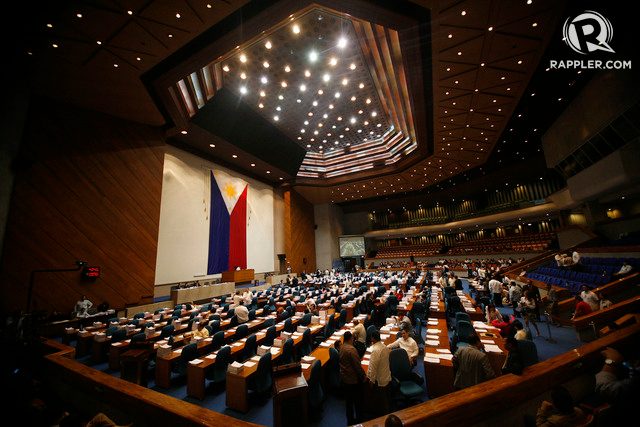 Facebook Twitter Copy URL
Copied
The net satisfaction ratings of the Senate and the Duterte Cabinet are also lower in the 2nd quarter of 2018, according to a Social Weather Stations survey

MANILA, Philippines – The House of Representatives, the Senate, and the Cabinet of President Rodrigo Duterte registered lower net satisfaction ratings in the 2nd quarter of 2018, according to the results of a Social Weather Stations (SWS) survey released on Sunday, July 29.

But the House suffered the biggest decline, with results showing a 10-point drop from +35 in March to +25 in June this year. Its net satisfaction rating is now classified a notch lower, from good to moderate.

The decline was driven by decreases in all areas, except Metro Manila.

The Senate’s rating, meanwhile, stayed good but went down by 4 points, from +45 in March to +41 in June.

The Cabinet’s rating remained moderate, but slid to +25 in June from March’s +28.

It saw a 1-point increase in the Visayas, but suffered “single-digit decreases” in Balance Luzon, Metro Manila, and Mindanao.

The SC saw decreases in the Visayas, Balance Luzon, and Metro Manila. It only increased in Mindanao, registering a 5-point improvement there.

SWS said the survey, conducted from June 27 to 30 among 1,200 adults nationwide, was “not commissioned” and was “released as a public service.”

The survey was conducted while Congress was on break. Before lawmakers had adjourned, Senator Vicente Sotto III was elected as Senate president.

It was also in the 2nd quarter of the year when Maria Lourdes Sereno was ousted as chief justice. Majority of her colleagues at the SC voted to grant the quo warranto petition against her in May, then affirmed this decision in June. – Rappler.com