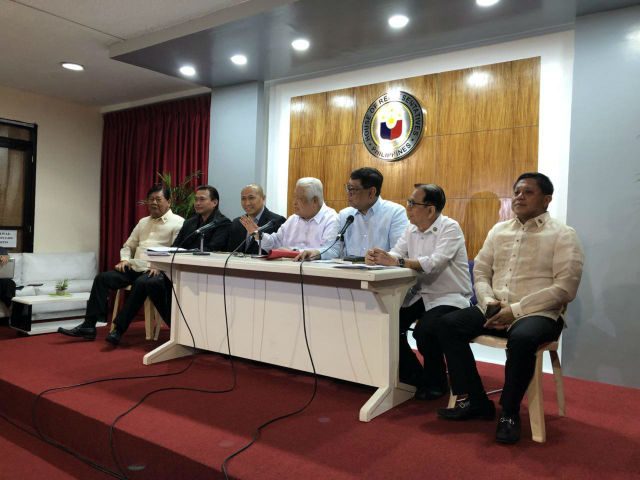 The day before, Fariñas insisted De Vera holds the position because he is the only legislator from the bloc once led by Quezon 3rd District Representative Danilo Suarez who did not vote for Pampanga 2nd District Representative Gloria Macapagal Arroyo as Speaker. Suarez, an ally of Arroyo, was the minority leader under ousted speaker Pantaleon Alvarez.

Fariñas said he and 12 lawmakers in the Alvarez bloc already applied to be part of the minority bloc under De Vera, who was Suarez’s senior deputy. But Villarin and Lagman disputed this. (READ: LP, Makabayan lawmakers join forces in bid for House minority)

LOOK: Rep Eugene de Vera accepts the application of 14 legislators from the Alvarez-Fariñas group into the contested minority bloc. Yesterday, Fariñas argued De Vera is the acting Minority Leader after most of the Suarez bloc voted in favor of Arroyo as Speaker. @rapplerdotcom pic.twitter.com/19reWEpuoH

“Cong Fariñas argued that Rep Suarez can’t be minority for abandoning minority to connive [with] majority to oust Alvarez. He then concluded that Rep De Vera, who is senior deputy minority, takes over. Alas, he forgot that there is no rule on succession for minority leader!” Villarin said in a tweet.

Lagman added that any rule on succession “must be explicit.”

In the same breath, Lagman also slammed the Suarez bloc for insisting they are still the minority bloc.

He once again referred to the House rules and a Supreme Court ruling that said all lawmakers who voted for the winning candidate for Speaker will constitute the majority, while those who did not will be part of the minority.

“The group of Suarez maintains there should be a [difference] between [the constitution] at the start of the Congress and a change in leadership subsequent to that original constitution. There is no difference at all with respect to the effect of a leadership change on the constituency of the majority and the minority,” said Lagman.

“Even the Supreme Court, in Baguilat vs Alvarez, made this observation – that a leadership change, an election of a Speaker, would in fact impact the constituency of the majority and the minority,” he added.

Should Suarez be retained as minority leader, Lagman said even future Congresses would be affected.

“This will always be used as a precedent, and then the majority can always take advantage of their ascendancy by instituting their own minority. So kawawa naman mga susunod na Congress (the next Congresses will be pitiful) if we allow this charade to perpetuate itself,” said Lagman.

The debates over the minority leadership will continue at 4 pm on Tuesday. – Rappler.com