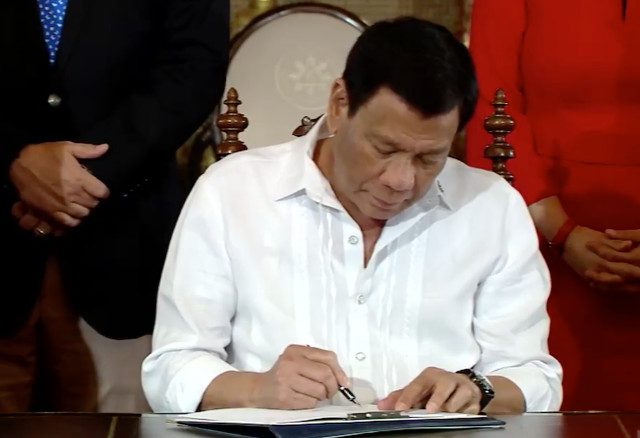 Facebook Twitter Copy URL
Copied
Filipinos will soon be asked to register with the Philippine ID System in order to get their national ID. Lawmakers give assurances that privacy rights and data will be protected.

The enrolled bill seeking to create a unified and streamlined national identification system was signed by the President in Malacañang in the presence of lawmakers and other officials.

The new law establishes the Philippine ID System or PhilSys, a centralized database for vital information on all residents and resident aliens in the Philipines.

It is meant to speed up and improve the delivery of government services and reduce fraudulent transactions.

“For the ordinary Juan dela Cruz, the signing of this Act means that he will no longer have to present multiple identification cards simply to prove his identity,” said Presidential Spokesman Harry Roque in a statement.

How it works: A physical national ID  or PhilID will be issued to each individual who registers with the system. Each person will also get a randomly generated, unique, and permanent ID number or Common Reference Number (CRN).

Personal data to be collected for the national ID will be include name, sex, date of birth, place of birth, and address. Biometrics information will also be collected, including facial image, full set of fingerprints, iris scan, and other identifiable features that are necessary.

It will be optional to give your mobile number and email address.

The PhilID or number can be used when dealing with national government agencies, local government units, government-owned and controlled corporations, government financial institutions, and the private sector.

Registeration for the ID will be free of charge. Filipinos living abroad may sign up for their national ID with the embassy or consular office where they are located.

Under the 2018 national budget, the government alloted P2 billion for the initial implementation of the program, lodged under the Philippine Statistics Authority’s budget.

The passage of the law means the Philippines leaves the small list of countries in the world without a national ID system in place.

Securing privacy rights, data: Yet creating a national ID system has sparked a debate on privacy and data security, especially at a time when government websites have been vulnerable to data breaches.

While the system may be beneficial, data privacy experts are worried about certain provisions in the bill which may blur the line between what’s appropriate and what may constitute a violation of privacy. (READ: ‘Record history’ casts cloud of doubt on proposed national ID system)

For example, the law’s inclusion of a record history, which will track each transaction made, may pave the way for mass surveillance. If the national ID system aims to streamline identity verification, keeping a record history would be completely unnecessary, experts said.

Senator Franklin Drilon, however, sought to assuage such fears. Drilon, who thanked Duterte for signing the law, said, “We have provided enough safeguards to protect the individual’s right to privacy and to prevent unscrupulous persons from accessing confidential information.”

He gave assurances that the Data Privacy Act would protect those registered from any violation of their right  to privacy.

Legislation for a national ID system was among the Duterte administration’s priorities in its legislative agenda.

Presidential Spokesman Roque said the signing of the law is consistent with Duterte’s commitment to cut bureaucratic red tape.

“Through PhilSys, we hope to improve efficiency and transparency of public services and promote ease of doing business,” he said.

Last May, Duterte also signed the Ease of Doing Business Act which created a unified and streamlined system for persons seeking to put up businesses in the Philippines. – Rappler.com