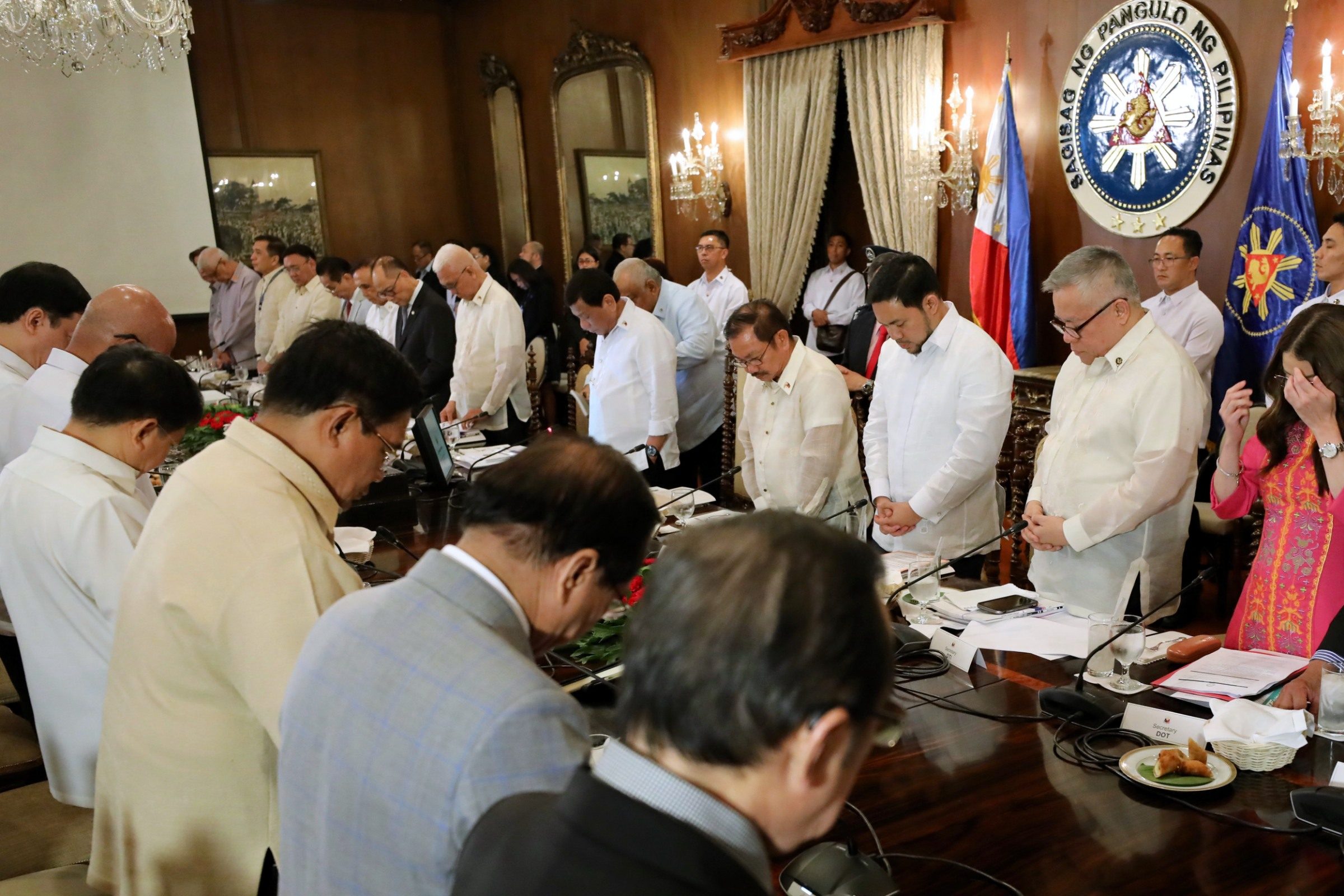 MANILA, Philippines (UPDATED) – President Rodrigo Duterte fired all board members of the Nayong Pilipino Foundation (NPF) for green-lighting a lease deal “grossly disadvantageous” to the government.

Duterte gave the order on Monday, August 6, during the 28th Cabinet meeting in Malacañang.

“He therefore announced that he was sacking all members of the board, management of Nayong Pilipino. The papers formally terminating the entire management and entire board will be issued in due course,” said Presidential Spokesperson Harry Roque on Tuesday, August 7.

Roque said at the press briefing that Duterte would have the lease deal “cancelled.” However, later in the day, he issued a clarification saying the President merely wants the contract reviewed.

“The President has instructed a review of the Contract of Lease entered by NPFI with Landing Resorts Philippines Development Corp. (LRPDC), which the Chief Executive described, in his own words, as ‘flawed,’ in that it was entered into without public bidding and was disadvantageous to the government,” said Roque.

The spokesman “does not know” if charges will be filed against the NPF officials.

Roque also did not specify which lease deal NPF entered into which Duterte found anomalous.

However, he said the deal was for a “ridiculously long period of time of 70 years.”

NPF chairperson Patricia Yvette Ocampo said she and the rest of the board accept Duterte’s decision.

“In behalf of the board of trustees of the Nayong Pilipino Foundation, I would like to thank the President for having been given the opportunity to serve the Filipino people. It is regrettable that it has come to this, but we understand that we serve at the pleasure of the President,” she said in a statement.

Last May, Duterte’s appointee to the NPF board, his distant relative from Cebu Maria Fema Duterte, filed a complaint against her co-board members with the Office of the Ombudsman. Ocampo was included in the complaint.

Duterte alleged that the NPF board’s approval of a contract allowing Chinese company Landing Resorts Philippines Development Corporation (LRPDC) to lease land would lead the government to lose at least P517 million a year. Because the contract is for 50 years, this would lead to losses of up to P25 billion, said Duterte.

It was supposedly agreed between LRPDC and the NPF board that the company would develop a Nayong Filipino theme park to be called NayonLanding in NPF’s land in Entertainment City, Parañaque City.

Ocampo denied allegations that the NPF board under her watch profited from the deal or put the government at a disadvantage.

“I strongly deny accusations that there was graft and corruption. On the contrary, the lease contract with Landing International Development Ltd. is above-board, and is highly advantageous to the government and to the Filipino people,” she said.

President Duterte previously declared an aversion to approving any more casinos, expressing a distaste for gambling. He has sought to back up this announcement by declaring no casinos would rise in Boracay, despite reports that a Chinese company would build such an establishment there. – Rappler.com