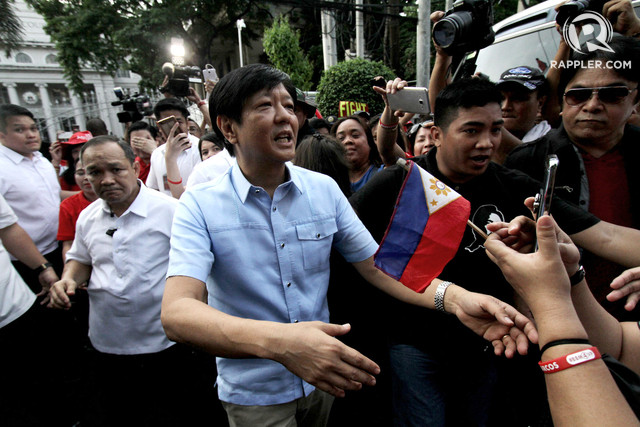 Presidential Spokesperson Harry Roque said this was the logical “conclusion” one would make from Duterte’s recent statements that he was ready to resign if the ideal leader will take his place in Malacañang.

“He thinks Senator Bongbong Marcos is one of the better qualified persons to succeed. If there are developments and he wins the protest and he becomes vice president, yes, he (Duterte) will make true his word,” Roque said on Thursday, August 16.

“If he wins the protest and he’s declared as vice president, he’s willing to step down,” he added. (READ: EXPLAINER: Duterte’s dream resignation, ‘junta’ and successor scenarios)

As to whether or not Duterte wants Marcos to win the electoral protest, Roque was less clear.

“That I do not know. That’s a different question,” he said.

Marcos and Robredo are locking horns on who won the vice presidency in 2016. Marcos filed an electoral protest with the Presidential Electoral Tribunal (PET) claiming Robredo only won because there was cheating in the last elections. Robredo won over Marcos by a slim margin of roughly 260,000 votes.

Duterte has always been open about his admiration for and close friendship with Marcos, namesake of the late dictator Ferdinand Marcos.  The President said on Tuesday, August 14, that he would step down if someone like Marcos or Senator Francis Escudero were next in line.

The PET, the body that will decide whether or not Marcos is the rightful vice president, is the Supreme Court sitting as an electoral tribunal.