Koko Pimentel urges Sara Duterte to run for senator in 2019 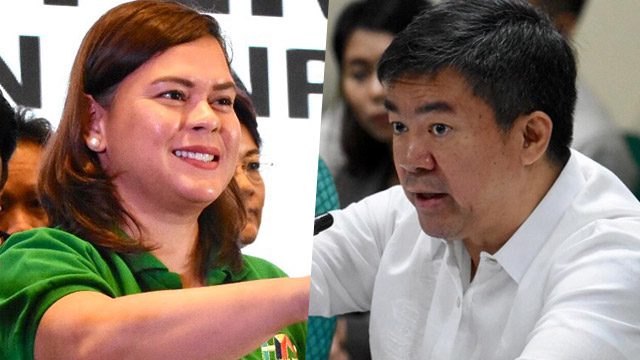 Facebook Twitter Copy URL
Copied
The PDP-Laban president says if the presidential daughter becomes a senator, she will have 'influence on certain key national issues,' including the national budget

Pimentel, president of ruling party PDP-Laban, said the Davao City mayor should seek a Senate seat so Mindanao would have “greater representation” in the chamber.

He also said as a senator, Duterte-Carpio would have “influence on certain key national issues,” including the national budget.

“Her experience as mayor of one of the country’s highly successful cities eminently qualifies her to speak for Mindanao, for peace and order, for the environment, and for the socio-economic upliftment of the marginalized sectors,” Pimentel said.

Duterte-Carpio has so far remained coy on her political plans – a move reminiscent of her father in 2015.

On August 13, HNP secretary-general Anthony del Rosario said she is “not interested” to run for senator and is keen on running for reelection.

But in June, she herself said that she would keep mum on her 2019 plans to “annoy” her detractors.

“I don’t really have plans to run for the Senate. The reason I don’t say that I won’t be running for the Senate is for my political detractors to feel annoyed. They will be happy, and I do not want to give them that happiness. Maybe later when it is time for the filing of candidacy,” she said on June 16.

In February 2018, she launched regional party Hugpong ng Pagbabago. While it is based in Davao region, HNP has now gained national prominence with politicians joining and forging alliances with the presidential daughter. (READ: Hugpong ng Pagbabago seals alliance with NP, NPC, NUP)

This is considered a challenge for PDP-Laban, chaired by President Rodrigo Duterte, as HNP is forging alliances with national political parties and is set on endorsing senatorial candidates even if it is a regional party. Pimentel, however, downplayed it, saying it has no effect on the ruling party. (READ: PDP-Laban struggles for unity, survival ahead of 2019 polls) – Rappler.com