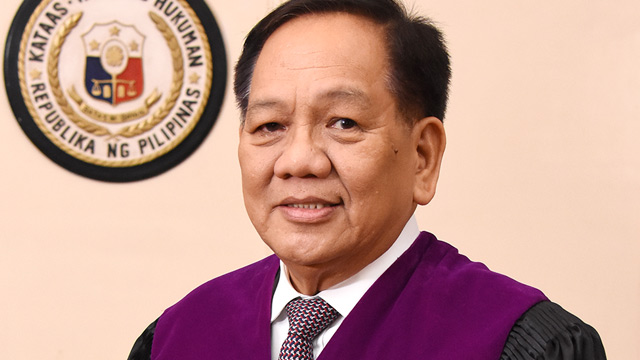 MANILA, Philippines – Supreme Court Associate Justice Diosdado Peralta is the second most senior applicant for chief justice, and if ever appointed, will serve the longest.

When he faced the Judicial and Bar Council (JBC) on Thursday, August 26, Peralta was asked if it is true that he has been telling people he would be the next chief justice.

Peralta laughed at first and said: “Modesty aside, I’m not like that, that’s not my character.”

Another reported ace in Peralta’s pocket is former president Gloria Macapagal-Arroyo, whose rise to House speakership speaks volumes about her influence.

Arroyo appointed Peralta to the SC in 2009. Their fathers were friends.

When he was appointed to the SC, Newsbreak reported on questions about Peralta’s independence. An opposition filed against his application then described Peralta as a “go-between” for litigants.

“[The most senior applicants] are all appointees of President Arroyo. You can surmise she’ll be supporting one of them,” said legal analyst Tony La Viña.

While Peralta and the two other senior applicants, Associate Justices Teresita Leonardo-De Castro and Lucas Bersamin are also Arroyo appointees, La Viña said their near retirements may work against them.

De Castro retires October this year, while Bersamin retires in October 2019 yet.

‘Man is always above the woman’

Justice Audrey Peralta tried to apply for the post of CA presiding justice but was excluded because of missing requirements.

Ilao started a line of questioning into the scenario, but Peralta did not let him finish.

“The man is always above the woman, so if she becomes the presiding justice of the Court of Appeals, I can reverse her. In other words, there will be no conflict, I hope,” Peralta said. (READ: #CJSearch: How did aspirants vote on key Supreme Court decisions?)

The hero’s burial was heavily opposed because of accusations of human rights violations during Marcos’ martial law rule.

“Considering the events that transpired after that decision was promulgated, do you think the Filipinos found closure, and the families of the wounded and the dead from martial law were able to move on?” Ilao asked.

Peralta answered: “I hope that issue has been buried, because if you don’t bury that issue, we cannot move on. And I believe, whatever happened in the past, we should move on. We will not improve as a nation if you [do not move on.]”

We wanted to ask Peralta about his views on it, and the legal implications of such a scenario, but he did not grant an interview.

Among the 5 chief justice aspirants, Peralta has resolved the most number of cases, a total of 3,895. – Rappler.com