Facebook Twitter Copy URL
Copied
A total of 133 flights are canceled in all 4 terminals while 10 are diverted to Clark, Cebu, Bangkok in Thailand, and Ho Chi Minh City in Vietnam

MANILA, Philippines – Thousands were stranded at the Ninoy Aquino International Airport (NAIA) on Friday, August 17, after a plane mishap that prompted the temporary closure of the runway.

The 12 noon target resumption of airport operations was moved to 4 pm, then 7 pm. At 6 pm, officials further delayed the reopening of the runway to 5 am on Saturday, August 18.

A total of 133 flights were canceled in all 4 terminals while 10 were diverted to Clark, Cebu, Bangkok in Thailand, and Ho Chi Minh City in Vietnam. (LIST: Canceled flights over NAIA airport mishap, August 17-18) Because of the cancelations, passengers were advised by airlines to rebook their flights for free online, and to refrain from going to the airport.

More than 2,000 passengers whose flights were diverted to the Clark International Airport in Pampanga were transported to Manila by buses. 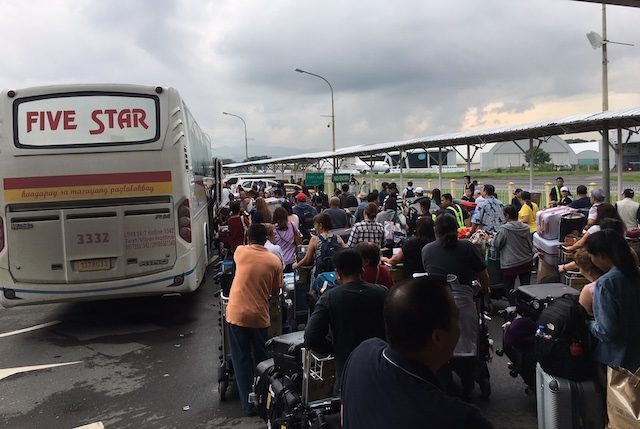 The Manila International Airport Authority (MIAA) earlier said it was using a telescopic boom crane to lift the  aircraft.

“While this is a positive development, mobilization process takes 3 hours and another 3 hours to demobilize. Aircraft recovery will happen in between,” MIAA said in a statement late Friday.

MIAA General Manager Ed Monreal apologized to the public for the inconvenience the incident has caused.

“We offer no excuses just a promise to bring NAIA flight operations back to normalcy by tomorrow using all our internal resources and if needed, employ outside resources notwithstanding the cost it will entail to MIAA,” Monreal said. – Rappler.com