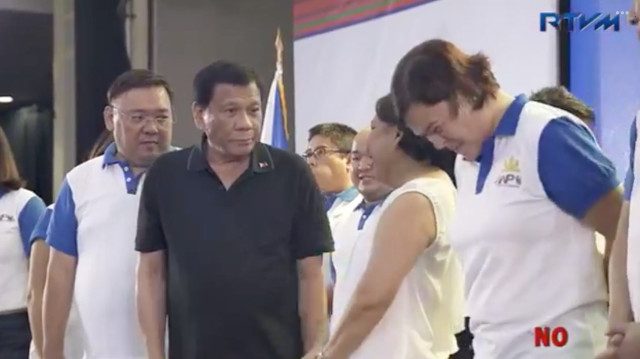 “Ang mabibigay ko lang siguro is my endorsement…. Ngayon, kung gusto ninyo, magtulong din ako (I can only give my endorsement…Now, if you want, I can help you),” said the President on Friday, August 17, in Davao City.

He was speaking at an HNP convention attended by officials and politicians – both local and national – believed to have plans of running in the 2019 midterm elections. These include Senator Cynthia Villar, Senator Sonny Angara, Presidential Spokesperson Harry Roque, Ilocos Norte Governor Imee Marcos, and Special Assistant to the President Bong Go.

Duterte did not take his oath as a member of HNP, merely serving as the event’s guest speaker. He also tellingly opted not to wear the white and blue HNP shirt, appearing instead in a plain black shirt.

The President said he would stick with Partido Demokratiko Pilipino–Lakas ng Bayan (PDP-Laban), under whose banner he ran for president in 2016. (READ: PDP-Laban struggles for unity, survival ahead of 2019 polls)

“I do not like to change parties. I will remain where I am,” said Duterte.

He described PDP-Laban as a party that had been “moribund” before he won, but said it was a party with “principles.” (READ: Duterte to PDP-Laban: ‘Unity now more important than ever’)

He said he chose PDP-Laban as his national party because of circumstances related to finances and consistency with his own values. But if he had a choice, he would have joined the Nacionalista Party, the political party of his father, Vicente Duterte, a former Davao governor and Cabinet member under Ferdinand Marcos.

Duterte also advised politicians in the audience not to cut ties from their “traditional mother unit.”

“My advice is, you connect with your traditional mother unit,” he said.

“If you’re comfortable with your mother unit, you might want to continue and coalesce with PDP-Laban,” Duterte also said.

Many local officials in the Davao region bolted from their national political parties to join HNP. Some Davao Region governors left parties like PDP-Laban and the Liberal Party to join HNP.

However, Davao City Mayor Carpio said there was “no conflict” in HNP membership and membership to a national party since HNP remains only a regional party.

“In this election, I commit to the Filipino people that this will be a clean election,” he declared.

“I’ll tell Comelec to deputize me personally. There will be voting and the votes will be counted correctly,” he also said.

He also said he would apply the Alunan doctrine in which more than two armed guards assigned to an individual is considered a private army that must be disbanded. This doctrine was introduced by former interior secretary Rafael Alunan III. – Rappler.com