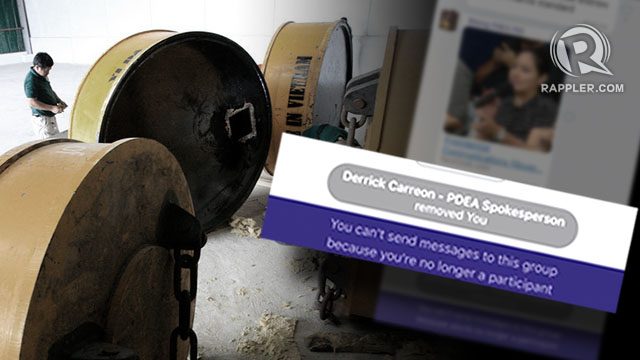 Mr Derrick Carreon did this after several days of privately messaging our reporter to express disapproval of how we had been pursuing information, documents, and all possible angles on the issue of the P6.8 billion worth of shabu that PDEA said got past the customs bureau.

Specifically, Mr Carreon had refused to acknowledge that it was a legitimate part of journalists’ work to acquire government documents and information not necessarily from an agency’s spokesperson and use these in our reports. That is not “illegal,” contrary to what Carreon had insisted; it is within the purview of serving the public’s constitutionally-guaranteed right to know.

Rambo Talabong got hold of the PDEA Laboratory’s own report that the swab test done on the magnetic lifters found in a warehouse in General Mariano Alvarez, Cavite, showed negative results for shabu. The document so far reinforced the fact that PDEA chief Director General Aaron Aquino had spoken prematurely on the matter – an issue raised by lawmakers against PDEA during the House hearing on August 14.

Mr Carreon is also the chief of the PDEA Laboratory.

Months before this, Mr Carreon’s boss, Director General Aquino, had expressed disapproval of Rappler after we ran a story of him acknowledging that PDEA made a mistake releasing a list of drug suspects because “Kami ay tao lang” (We’re only human). It was a straightforward report based on what Aquino himself said in an interview with Karen Davila on ANC’s Headstart, and yet he accused us of twisting his statement.

Rappler condemns in the strongest terms the attempt of Mr Carreon to cut Rappler out of the official media advisory and coordination channel of PDEA – a public office funded by taxpayers’ money, and therefore within the media’s right and duty to freely access.

The spokesman’s act is not only unprofessional, but an unmistakable attempt to control the news agenda by excluding those who probe, those who raise legitimate questions, and those who stick to independent reporting. – Rappler.com