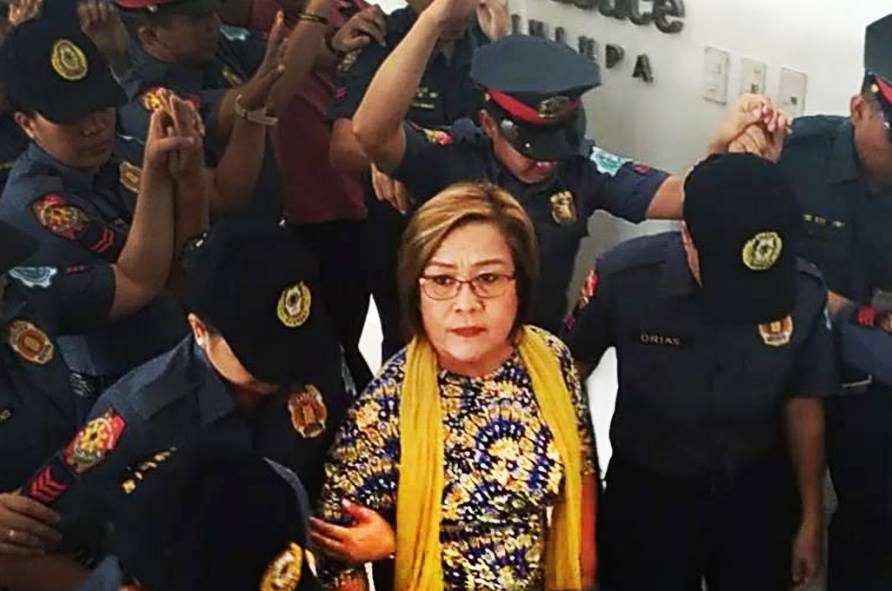 Facebook Twitter Copy URL
Copied
'Maybe it is only ironic that the mastermind of this breakdown in the rule of law, where even lawyers are no longer safe, is a lawyer himself,' says Senator Leila de Lima, referring to President Rodrigo Duterte

MANILA, Philippines – Two opposition senators have sounded the alarm on the recent arrest of 3 lawyers who were monitoring a drug raid on a Makati bar,

“The message is clear. The police is no longer making any distinction between lawyers defending clients and the target of police operations. Lawyers are now fair game as targets of the drug war,” Senator Leila de Lima said in a statement Camp on Saturday, August 18.

Senate Minority Leader Franklin Drilon joined De Lima in condemning the arrest, which he described as “intimidation of the legal profession.”

“The arrest of the 3 lawyers is not only an assault against the country’s legal profession, but also a blatant display of disrespect against our entire justice system,” said Drilon in a  separate statement.

De Lima and Drilon are both lawyers and former justice chiefs. De Lima is also former chairperson of the Commission on Human Rights.

What arrest are they slamming? On Thursday, August 16, cops raided the Time in Manila bar in Makati City, after getting information that drugs were hidden in its premises. Three lawyers representing the bar joined them, took photos and video, then asked for their search warrant.

Cops asked the lawyers to identify themselves and their client, but the lawyers allegedly refused to respond, so cops arrested them. (READ: Cops in Makati bar arrest say lawyers ‘harassed’ them)

Police added that the lawyers did not have “coordination” or “authority” to follow them, and even allegedly stopped them from entering the third floor of the bar.

The 3 lawyers face criminal charges, right after enduring over 24 hours of detention. One of the cases filed against them is the questioned “constructive possession” of illegal drugs.

De Lima finds fault in Malacañang: De Lima doesn’t only blame the cops on the ground but also the man in Malacañang, President Rodrigo Duterte, who initiated the “relentless and chilling” anti-drug campaign.

“Maybe it is only ironic that the mastermind of this breakdown in the rule of law, where even lawyers are no longer safe, is a lawyer himself,” De Lima said.

She added: “Tokhang is no longer for the poor and defenseless alone. Lawyers are also now in the PNP’s line of sight. Everyone is now equal, not before the law, but in the breakdown of the rule of law and Duterte’s reign of impunity.” – Rappler.com