Why don’t we know enough about Supreme Court justices’ wealth?

Aug 21, 2018 9:04 PM PHT
Lian Buan
Facebook Twitter Copy URL
Copied
A group wants to nullify strict guidelines on releasing SALNs of justices, saying that they are not above the law 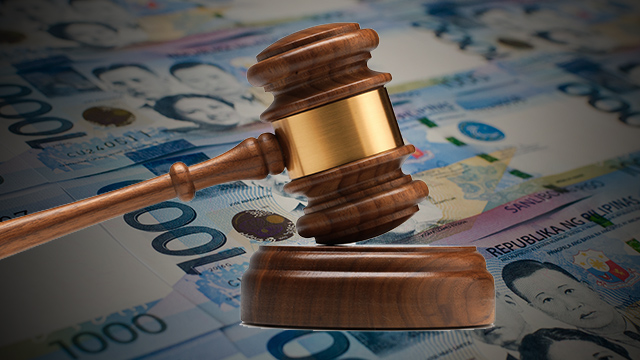 MANILA, Philippines – The Judicial and Bar Council (JBC) has postponed the vote on the short list of chief justice applicants because they need more time to examine documents, including Statements of Assets, Liabilities, and Net Worth (SALNs).

This is coming off two ousters of Philippine chief justices because of deficiencies in their SALNs.

What exactly can the public know about the wealth of Supreme Court justices?

Below are summaries of the justices’ net worth and their government salaries and allowances over the last 6 years, or since 2012 when the impeachment of the late Renato Corona prompted more public scrutiny of their SALN

Is this all we can and should know about their wealth?

Typically, SALNs of government officials can be released in full. For example, copies of SALNs of the President, Vice President, and heads of the constitutional bodies are released to media by the Office of the Ombudsman on a walk-in basis.

In the Supreme Court, it’s a little bit more difficult.

The Supreme Court releases summary reports of the justices’ SALNs. Compiled in one table, it shows only real properties, personal properties, total assets, liabilities, and net worth. 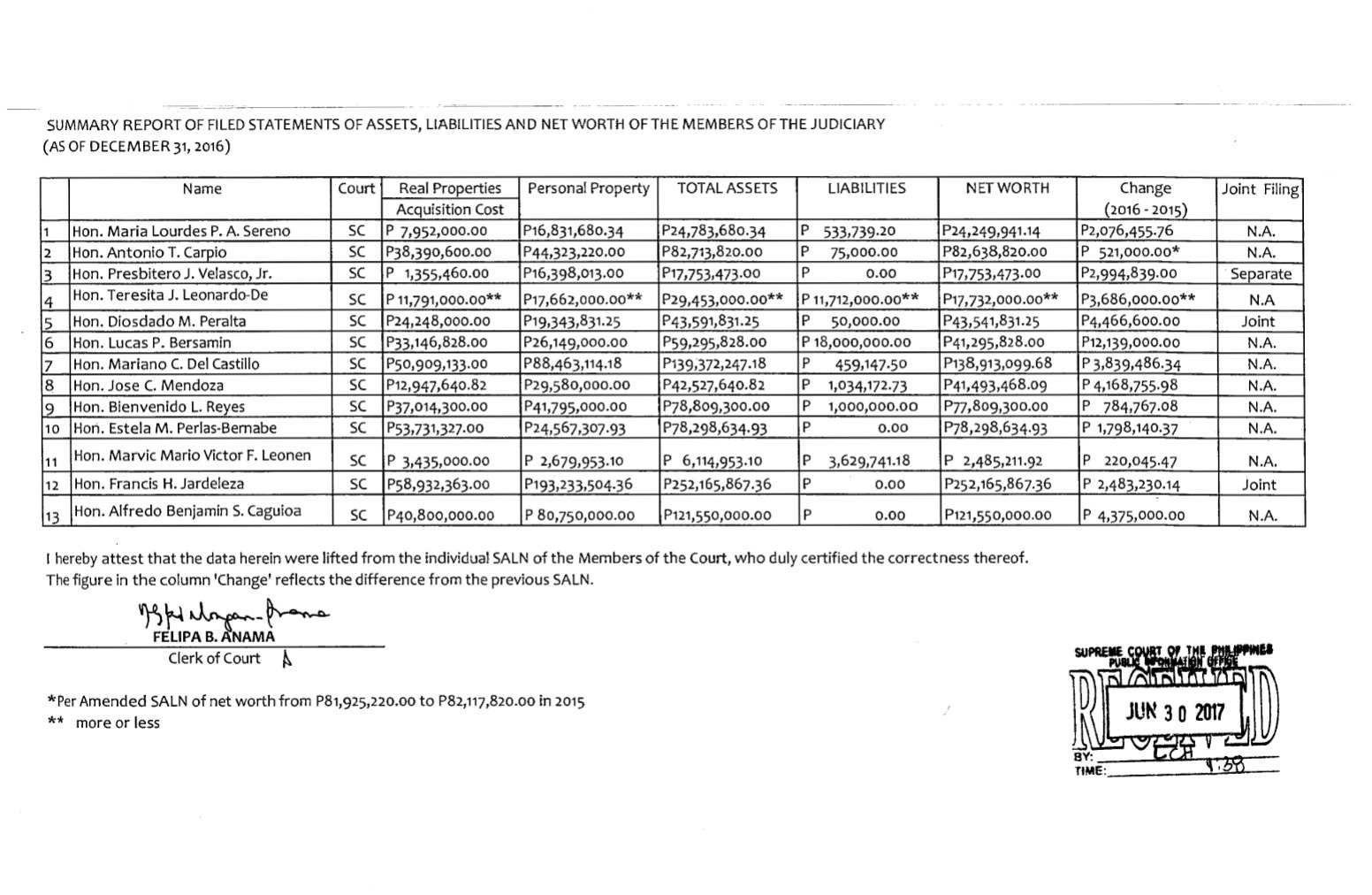 To see the full documents, you’d have to file a written request justifying it. It will then have to be approved by the Court en banc.

Also, a request can be made only for the latest SALN.

These rules came about in July 2012, months after Corona was impeached, when the en banc issued A.M. No. 09-8-6-SC, or the resolution that laid out somehow strict guidelines when it comes to releasing justices’ SALNs.

The Court noted an instance in 1989 when an aggrieved lawyer requested copies of justices’ SALNs after accusing some of them of partiality.

“Requests for SALNs must be made under circumstances that must not endanger, diminish or destroy the independence, and objectivity of the members of the Judiciary in the performance of their judicial functions, or expose them to revenge for adverse decisions, kidnapping, extortion, blackmail or other untoward incidents,” the court said.

In 2014, the SC denied the request of former tax commissioner Kim Henares to obtain 9 years’ worth of SALNs of justices of the Supreme Court, Court of Appeals, and Court of Tax Appeals.

The SC said that Henares cannot just go on a “fishing expedition” if she has not yet established that the justices have tax deficiencies.

With such strict guidelines, there are missing details that are of public interest.

For example, during the JBC public interviews on August 16, member Milagros Fernan-Cayosa said that the assets of Associate Justice Lucas Bersamin had remarkable jumps, the highest being an P8-million increase from 2015 to 2016.

Our table above will not show that because we can only show general amounts.

Without a full document, we will not know what caused the increase in assets – whether it’s a newly-acquired property, or newly-acquired business shares, or just cash deposits that may have come from pension or somewhere else.

We also will not be able to scrutinize if justices filled out their SALNs correctly.

Remember that Maria Lourdes Sereno’s non-filing of SALNs was interpreted to be a violation of Republic Act 6713, and a constitutional violation that declared her to have never been qualified for the post.

Dissenters in the Sereno ouster warned against treating the SALN as an end-all-be-all of integrity.

“Since the majority of the Court has ruled that SALN filing is equivalent to the requirement of integrity, the Supreme Court is now required to be transparent with the SALNs of the incumbent justices,” said a letter sent to the Court last June by the Movement Against Tyranny, led by former senator Rene Saguisag.

The group added: “It cannot now pursue the same prohibitive rules on SALN disclosures as contained in A.M. Nos. 09-8-6-SC as it did prior to its ruling in Republic v. Sereno, as the Court itself has declared that Justices are not above the law.”

The Court has yet to respond to the group’s request; it has also yet to release summaries for 2017.

With the selection of a new chief justice, the Supreme Court can and should expect more demands for transparency. – Rappler.com