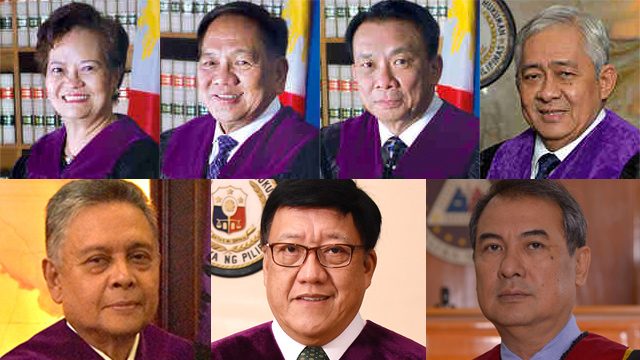 Four of them – De Castro, Peralta, Bersamin, and Reyes – are all vying to become the new SC chief justice. The impeachment complaints against them will be filed by 4 out of 7 opposition lawmakers forming the so-called “Magnificent 7” bloc in the House of Representatives:

The opposition legislators argued the 1987 Constitution only allows the removal of impeachable officials like the chief jusice through impeachment by the House then conviction by the Senate, sitting as an impeachment court.

The lawmakers initially wanted to include former associate justice Samuel Martires in the complaint, as he also voted to oust Sereno on May 11. But President Rodrigo Duterte appointed him as the new Ombudsman on July 26.

How did the SC justices allegedly violate the Constitution? All 7 justices are accused violating the 1987 Constitution primarily because of 4 reasons.

First, the lawmakers argued the justices were “fully aware” that impeachment is the only mode to remove impeachable officials, like the chief justice, under the Constitution. The legislators said this is “buttressed by the wealth of relevant jurisprudence of no less than the High Court and the pertinent deliberations in the Constitutional Commission on the same issue.”

Secondly, a quo warranto petition, like the one filed against Sereno by Solicitor General Jose Calida, is “anathema to the unequivocal mandate of the Constitution” that the power to impeach is solely vested with the Congress.

Third, in its majority decision, the SC said the Constitution’s use of the word “may” allowed the Court to use an alternative option to remove Sereno. But Lagman’s bloc said the justices “violated the unmistakable context and intent” of Section 2.

Fourth, the legislators also argued the justices were guilty of violating the Constitution because they “usurped” the constitutional power of the Judicial and Bar Council (JBC) to vet and nominate applicants to judicial positions.

“Quo warranto has a legitimate function, but these justices obviously used this legal tool to wage their personal vendetta against former Chief Justice Serreno. If we don’t strive to stop them now, it will happen again,” said Baguilat. (READ: Sereno impeachment: Cracks in the Supreme Court)

The legislators argued this was because they refused to inhibit themselves from voting on the quo warranto petition after testifying against Sereno during the impeaching hearings of the House committee on justice. (READ: Justices on Sereno ‘transgressions’: Until when will we suffer?)

The lawmakers said the 5 justices’ testimonies showed their “patent and continuing ill will, bias and prejudice” against Sereno.

“With the removal of Sereno, a vacancy was created in the position of chief justice. These justices were expected to vie for said position as in fact they are,” said the lawmakers. Do the complainants have the numbers to support the impeachment? They don’t for now. It will also be an uphill battle for Lagman, Alejano, Baguilat, and Villarin.

This is because a majority of the 292 members of the House are allied with Duterte, who supported the ouster of Sereno.

Alejano said the current state of the Duterte government might tempt Filipinos to feel powerless. But this should not stop them from standing up for democracy.

“We cannot and should not allow the wrongs to remain unopposed. Tolerating them will only further weaken our democracy,” said Alejano.

Sereno herself faced her own impeachment complaint at the House last year, with the committee on justice later approving 6 articles of impeachment against the former chief justice after holding months-long hearings.

But the House leadership rendered the pending articles of impeachment as “moot and academic” after the SC ruled with finality on Sereno’s ouster.

If at least 1/3 of the House affirms the complaint, it will be forwarded to the Senate for an impeachment trial presided by the Chief Justice. A 2/3 vote of all members of the Senate would convict the justices and remove them from office. (READ: FAST FACTS: How does impeachment work?)

Read full copies of the impeachment complaints against the 7 justices below: