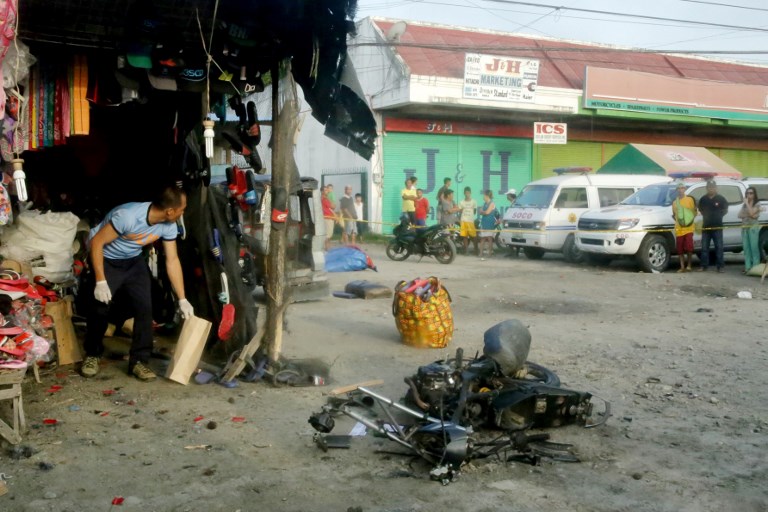 MANILA, Philippines (UPDATED) – The abandoned bag exploded during a jampacked fiesta celebration just as a military cargo truck passed by the highway of Isulan, Sultan Kudarat on Tuesday night, August 28. A woman and a 7-year-old boy were killed while at least 37 were wounded in an attack that targeted troops, according to a local military spokesperson.

It’s the latest in a string of deadly bombings that hit Mindanao in the past year, demonstrating what military officers describe as the post-Marawi tactics of local armed groups linked with international terrorist network Islamic State (ISIS). (READ: Marawi stories: One year after the siege)

The Isulan blast last Tuesday occurred a month after a deadly explosion that killed 10 in Lamitan City, Basilan, including women and a child.

ISIS claimed responsibility for the latest attack in Isulan, according to reports.

“We are validating, but the likelihood that the Bangsamoro Islamic Freedom Fighters (BIFF) and Dawlah Islamiyah-Abu Turaifie Group [are behind the attack] is high,” Major General Cirilito Sobejana, commander of 6th Infantry Division that has responsibility over the area, told Rappler on Wednesday, August 29.

“The greatest threat that we have now is really ISIS,” said Galvez during a budget hearing on Wednesday. He referred particularly to its adherents – the Maute Group and BIFF in Central Mindanao and the Abu Sayyaf Group in Western Mindanao.

Yet, the military also constantly downplays ISIS influence here and sometimes still talks like it’s dealing with a conventional threat.

Why the mixed signals? Defense and military officials harp on the “defeat” of ISIS-inspired local armed groups in Mindanao’s battlefield. They said these groups are no longer capable of mounting another large-scale siege, such as the one in Marawi last year.

But the deadly blasts in the last 12 months happened outside the battelfields. IED attacks could be launched by individuals bombers.

Still, Lorenzana finds a silver lining to this. “Kaya nga napakahirap hanapin kasi ang kaunti na lang nila (They’re harder to find now because there are not too many of them),” he said.

The military also said it came close to preventing the Isulan town attack. Troops reportedly spotted and approached the alleged perpetrators based on suspicious actions, but the bombers had already planted the IED and were able to trigger it before escaping.

The local military had information that IED attacks would target security forces but they were expecting it in the neighboring province of Maguindanao.

The military’s KM450 truck in the area has metal plates on both sides. These plates absorbed some of the shrapnel from the blast in Isulan. “Kung wala ‘yung truck, baka mas mahigit pa sa 2 patay at 37 wounded ang naging biktima,” said Encinas. (Without the truck, there could have been more casualties.)

Bombs as tools. ISIS previously claimed responsibility for the deadly attack in Lamitan City last July 31, where a foreign terrorist was believed to have committed a suicide attack.

Almost on instinct, the military downplayed ISIS’ role there, blaming it on the Abu Sayyaf subgroup led by Furuji Indama.

Galvez said investigation showed the nitrate bomb used in the Lamitan attack was assembled in 4 hours. “They constructed the bomb around 2100 and they deployed it at 0100,” Galvez said.

The target was believed to be a parade at the city proper of Lamitan. The bomber may have prematurely triggered the explosive as he was flagged at a checkpoint.

At least 3 other bombing attacks were reported since January 2018 while several attempts were foiled when the improvised explosive devices (IEDs) were discovered and diffused by troops.

Many of these were assembled by trainees of Malaysian terrorist Zulkifli bin Hir or Marwan, who was killed in the Philippines in 2015, said an intelligence officer. He said the recent attacks were a result of fresh funding from ISIS abroad.

Sobejana himself escaped a potential bomb attack in June 2018 when his men found and diffused an IED planted along his convoy route.

How effective is martial law in Mindanao? The bombings have raised questions on whether martial law works in the home region of President Rodrigo Duterte.

Senator Panfilo Lacson, a retired police general, said in a statement on Thursday, August 30, that the situation “suggests that neither martial law nor the Bangsamoro Organic Law could guarantee peace in Mindanao.”

He said “our ground security forces should take a hard look at their security plans and strategy, especially in the South, and try to avert the vicious cycle of talking peace with one tribal group while alienating the others.”

Mindanao has been in a state of martial law for more than a year now, since President Duterte declared it after the Marawi siege in May 2017.

Congress allowed him to extend it to December 2018, but the Sultan Kudarat blast is now prompting his advisers to consider another extension. – Rappler.com