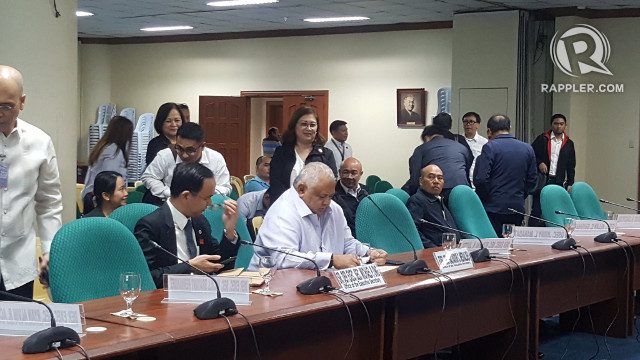 Facebook Twitter Copy URL
Copied
Agencies and departments will now have until 6 months after the fiscal year to make their payments under the 2019 cash-based budget system, says Executive Secretary Salvador Medialdea

MANILA, Philippines – The executive branch and lawmakers agreed on a 6-month extension to allow agencies to make their payments given the implementation of a cash-based budget system for 2019.

This was confirmed by Executive Secretary Salvador Medialdea on Thursday, August 30 during the Office of the President budget hearing at the Senate.

“With respect to the 6 months extension, I confirm there was a disucssion and there was already an agreement on extending to 6 months to give all parties the leeway to meet their obligations,” he told Senator Loren Legarda, chairperson of the Senate appropriations committee.

Legarda had asked the senior Cabinet member to confirm the timeframe, given concerns of members of the House of Representatives on how a cash-based budget could impact the implementation of government projects, especially during an election year such as 2019.

“I understand there could be a 6-month extension on account of the campaign. Of course, when there is campaigning, the implementation of projects will be affected,” said the senator.

“While I am in agreement with the cash budget, I also understand the concerns of the lower house for the request for the extension,” she added.

Previously, the executive branch had already decided on an extension of 3 months after the end of the fiscal year for agencies and departments to finish paying for costs incurred in implementing their projects.

The Duterte government pushed for a cash-based budget in 2019 to promote fiscal discipline and better planning among agencies in spending or using their resources.

Members of the House, however, initially questioned the budgeting system, saying it leads to across-the-board budget cuts that would limit government programs.

The House even temporarily stopped budget hearings. They resumed after lawmakers met with President Rodrigo Duterte and his economic managers. – Rappler.com