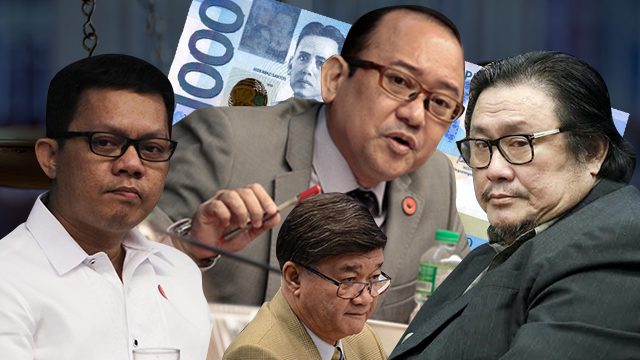 Facebook Twitter Copy URL
Copied
A plunder complaint requires a minimum of P50 million. The NBI under former justice secretary Aguirre only recommended charges of graft because of the supposedly missing P1,000.

MANILA, Philippines – The anti-graft court Sandiganbayan denied the bail petitions of former Bureau of Immigration (BI) executives in the Lam bribery plunder case, as it junked a technicality argument that the amount of money involved never reached the plunder threshold of P50 million.

An ocular inspection of safety deposit boxes showed the P1,000 was not missing after all.

It is odd as odd can be, “a joke” as senators put it when they first heard it. But the myth of the missing P1,000 carried on until the case reached the Sandiganbayan, up until manual recounts debunked it.

The missing P1,000 issue was part of the basis of the Court in ruling that the evidence of guilt against the accused is strong, denying them the right to bail.

Argosino and Robles are accused of extorting and receiving P50 million from business tycoon Jack Lam, in exchange for the release of Lam’s Chinese casino employees, arrested by the BI in 2016 for being illegal aliens. Sombero was the alleged middleman between Lam and the Immigration executives.

The P18 million that came into the possession of the BI’s former intelligence officer Charles Calima is now in the custody of the Philippine National Police-Criminal Investigation and Detection Group or PNP-CIDG.

This is in addition to the P2 million which was allegedly a “balato” or a cut for Sombero which has been turned over to the Office of the Ombudsman. The sums add up to P20 million.

The balance of P30 million went to Argosino and Robles, who claimed that they took the money only for the purposes of gathering evidence for their own case build-up. They said they turned this over to former justice secretary Vitaliano Aguirre II in December 2016.

The money was put in the Department of Justice’s safety deposit box in Land Bank in Manila.

It was for this reason that the National Bureau of Investigation (NBI), which was then under Aguirre, filed only a recommendation for graft and direct bribery, and not for plunder.

“This is blatant mockery,” Senator Franklin Drilon said then.

What did the court find out? In their petitions for bail, Argosino and Robles still used the missing P1,000 argument.

The court personally inspected the safety deposit boxes in Land Bank on August 8 and August 17. One package had a label of P999,000.

“The bills were counted by using a high-speed money counter and/or a portable money counter. Manual counts were done upon motion of the parties,” the court said.

Present in the recounts were court personnel, Land Bank personnel, and representatives from the DOJ.

Who accessed the safety deposit boxes? Aguirre told senators in October 2017 that the DOJ never participated in the count, only bank personnel.

There are two sets of keys to the safety deposit boxes. One is with DOJ Director for Financial Services Ma Elisa Germar, and the other is currently with Justice Secretary Menardo Guevarra, after it was turned over to him by former justice undersecretary Erickson Balmes.

Balmes, Aguirre, Argosino, and Robles all belong to the famed Lex Taleonis fraternity, the fraternity of President Rodrigo Duterte.

According to the prosecution, Germar said that she never turned over her keys to anyone from the time they put the money in the safety deposit boxes.

“Insofar as the second set of keys in the possession of the Secretary of Justice, the above turn-over from Undersecretary Balmes to DOJ Secretary Guevarra is the only transfer that was effected,” said the prosecution, citing Germar.

The court looked at the bank’s record of accesses. It had 4 entries, beginning December 15, 2016, which is when the DOJ first deposited the money there.

“Director Germar identified her signature beside the first entry. She could not identify the 8 signatures under hers,” said the court.

“(Germar) identified her signature and that of former DOJ undersecretary Erickson Balmes beside the second entry,” said the court.

Germar said she and Balmes opened the safety deposit boxes on June 22, 2018 “to check if the money was intact,” adding that they “only opened the box, without opening the plastics.”

The last two entries, August 8 and August 17, 2018, are the court’s ocular inspections.

What happens next? The Sandiganbayan will now move to trial where it will thresh out the issues more comprehensively.

In its resolution denying the bail, the Sandiganbayan said that if Argosino and Robles really intended to return the money as evidence, “the amount would have been kept intact.”

“Had there been a legitimate entrapment operation against Jack Lam, it is reasonable to expect that Commissioner Morente would have known, or at the least, would have been informed about it, especially considering the substantial amount of money involved,” the court added in the resolution penned by Associate Justice Sarah Jane Fernandez, with concurrences from Associate Justices Karl Miranda and Zaldy Trespeses.

Calima claimed that Argosino gave him the P18 million, with the latter saying it’s for “damage control.” At the time, Calima said Argosino was worried that Inquirer columnist Ramon Tulfo, or Sombero were going to go public with the issue.

Calima was the one who investigated Argosino and Robles, with the permission of BI Commissioner Jaime Morente. Morente confirmed this.

Sombero claimed he wanted to have a dialogue with the DOJ and the BI because the raid on Lam’s casino would be bad in the long run for the entire Philippine gaming industry.

Calima said he told Sombero to reach out to Aguirre.

“According to accused Sombero, (Aguirre) asked him to coordinate directly with Associate Commissioners Argosino and Robles. He (Calima) thought it was strange because he expected (Aguirre) to advise Sombero to coordinate with Morente, the head of the BI,” reads the court’s narration of Calima’s testimony.

The alleged payoff of P50 million from Sombero to Argosino and Robles happened early morning of November 27, 2016.

In the days that followed, Calima said he confronted Argosino and Robles about it.

“Accused Argosino explained that he abandoned his connection with (Aguirre) because he had a new connection, through whom he could easily earn P1.5 billion in 3 years,” said Calima.

Morente then met with Argosino, Robles, and Calima. In the meeting, Robles supposedly asked Morente to help them find a way out of it, saying “tapos na ‘yung career ko, isinama lang naman ako dito (my career is finished, I was just dragged into this).”

Morente said he told the two commissioners to resolve it themselves.

Calima said he then privately met with Argosino and Robles, using “tradecraft” to gather more evidence. That’s when Argosino allegedly gave him the P18 million for damage control.

Calima reported the new developments to Morente, who advised him to report directly to Aguirre.

But Calima said Aguirre never met with him despite follow-ups through text messages.

The next day, December 14, 2016, Argosino and Robles held a press conference presenting the P30 million they claimed to have gotten as evidence.

Duterte then fired Argosino and Robles. Aguirre said he felt betrayed by his fraternity brothers.

Aguirre was cleared by Senator Richard Gordon’s Senate Blue Ribbon Committee, despite opposition senators raising the questionable meeting  among Aguirre, Argosino, Sombero, and Lam in a private hotel room in Taguig on November 26, 2016.

The payoff among Sombero, Argosino, and Robles would happen at the City of Dreams in Parañaque, with CCTV footage catching the scenes beginning 12:30 am of November 27, 2016.