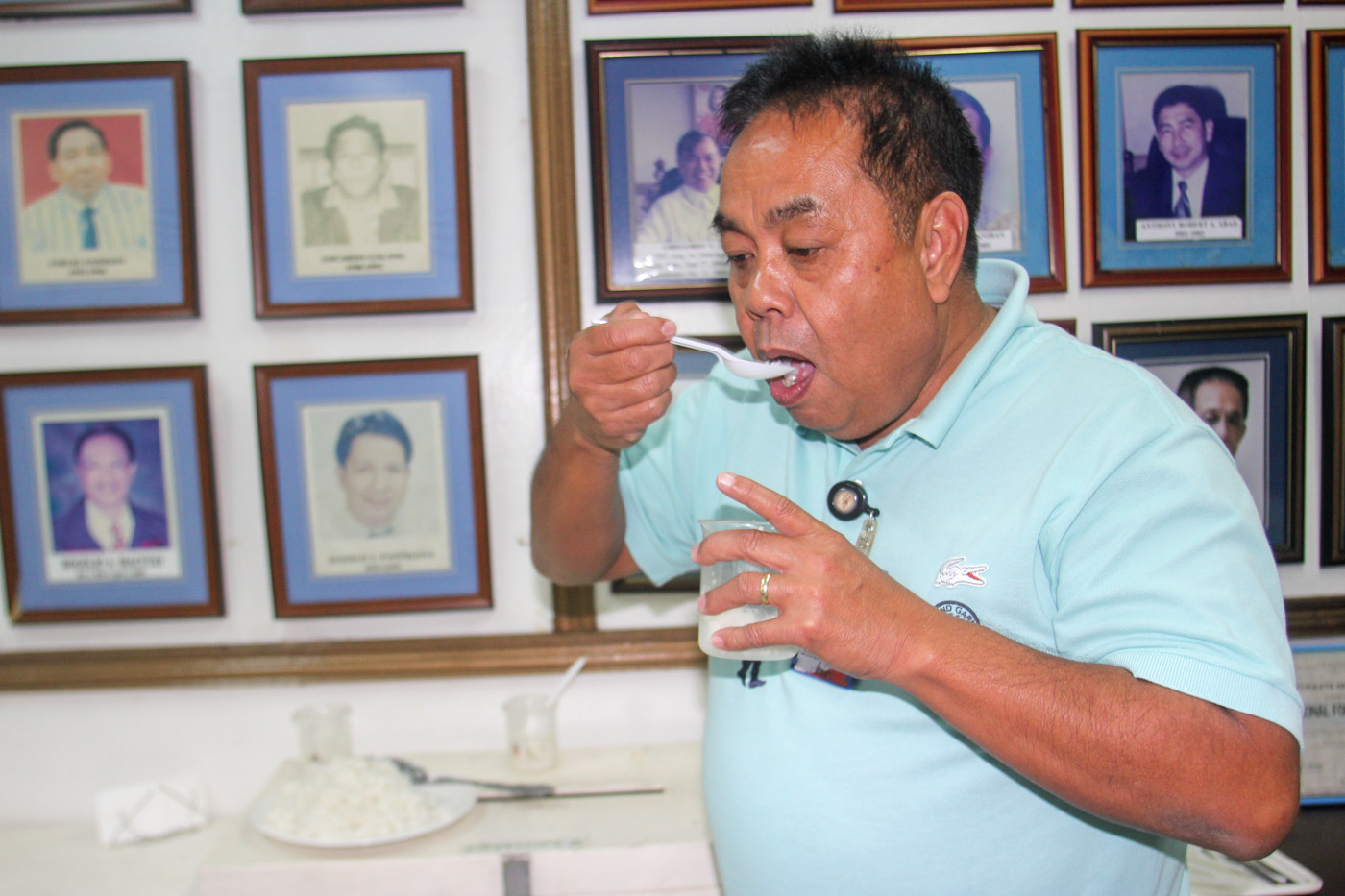 LEGAZPI CITY, Philippines – The National Food Authority (NFA) and the Bureau of Plant Industry (BPI) in Bicol on Friday, August 31, declared a shipment of rice imported from Thailand cleared of bukbok (weevils).

NFA-Bicol director Henry Tristeza said 177,000 bags of Thai rice will be unloaded from Tabaco City port in Albay once weather permits, after nearly two weeks of fumigation cleared the grains of weevil infestation.

BPI-Bicol conducted the 12-day refumigation of the rice, part of a 250,000-metric ton shipment equivalent to 5 million bags.

To show that the rice is fit for human consumption, Tristeza led other NFA-Bicol officials in a taste test of the cooked rice taken from the shipment, and invited members of the media to sample it as well.

NFA officials here presented samples of the cooked rice to the media after receiving the letter of  Danilo L. Doblon, Plant Quarantine Service regional manager,  that the rice shipment was weevil-free.

“Pleased be informed that based on the inspection and examination of samples randomly collected in all the 3 holds of the vessel, after the conduct of refumigation, no live insects had been observed, hence, discharging of the same is hereby recommended,” Doblon said in a letter to Tristeza and NFA-Albay Director Alan Sabaybay.

The Thai rice shipment rice arrived at the Manila port on June 3, but the allocation for Bicol arrived at Tabaco port on August 17.

NFA Bicol officials discovered the shipment infested with weevils on August 20. The infestation affected 177,000 of the 200,000 bags allotted to the Bicol region, prompting officials to postpone the unloading until the rice was treated.

Tristeza said in his 40 years of service at the NFA, it was the first time that he encountered weevil infestation in imported rice. He said humidity and the hot weather helped the pests thrive.

The NFA regional chief also shared the sentiment of Agriculture Secretary Manny Piñol that weevil-infested rice is safe to eat.

“Rice with weevil is very safe to be eaten, just like a vegetable with a worm, meaning free from chemical contamination. But just the same we conducted the fumigation to remove the weevil,” Tristeza said.

He also said the government would not lose a single centavo over the delayed unloading of the rice shipment, citing international protocol that imported commodities in transit and in anchorage are still owned by the supplier. He said that treatment of the rice was paid by the supplier from Thailand.

The imported goods will be owned by the Philippine government once in NFA warehouses. The 177,000 bags of rice will be distributed to Albay, Camarines Sur, Camarines Norte, Sorsogon, Catanduanes, and Masbate.

The Makabayan bloc is seeking a House probe into the weevil-infested rice from Thailand. – Rappler.com