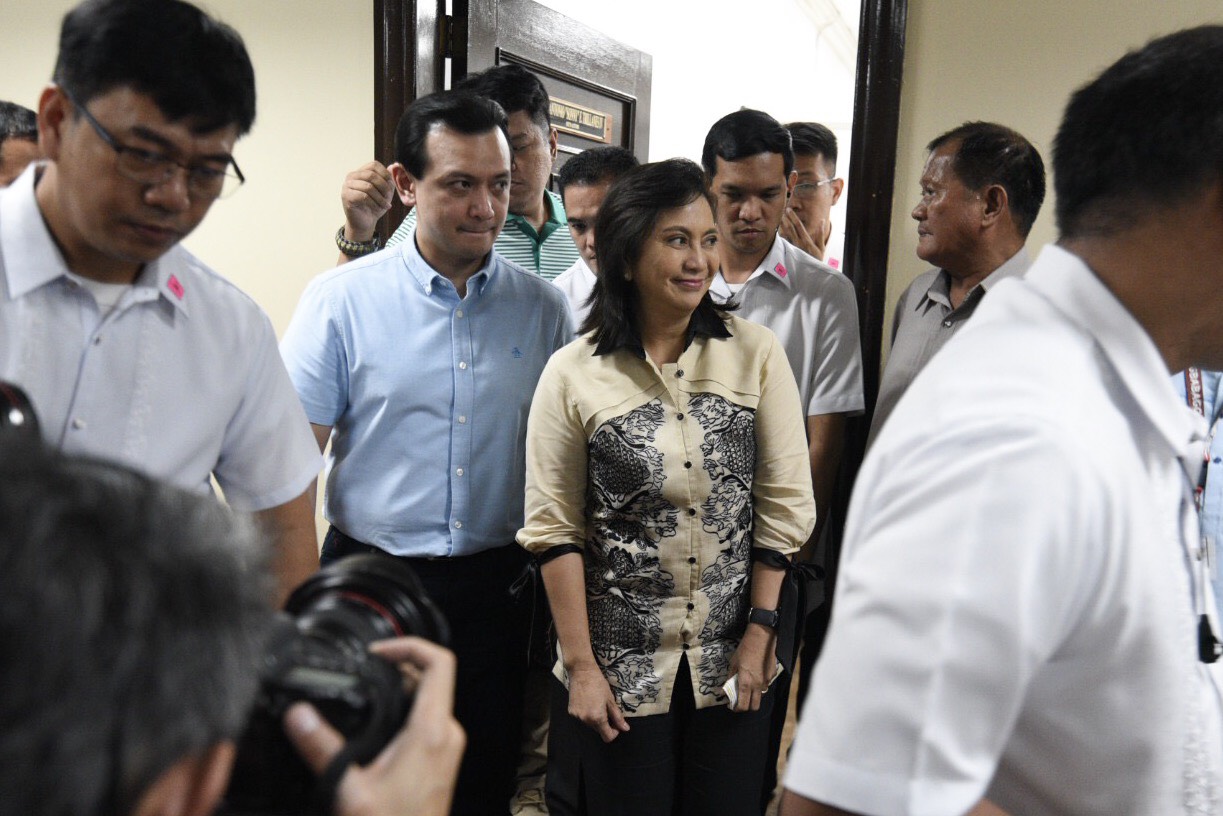 MANILA, Philippines – Vice President Leni Robredo on Thursday, September 6, visited Senator Antonio Trillanes IV in his Senate office, where he has been staying for 3 days now. (LOOK: Inside Trillanes’ ‘home’ in the Senate)

Robredo said she decided to personally show her support for Trillanes after she spoke at an event at the nearby Philippine International Convention Center (PICC).

The Senate leadership, supported by majority of the senators, allowed Trillanes to stay in the building as he tries to exhaust legal solutions in his case.

(Since I’m already near, I thought of visiting so I can talk to Senator Trillanes to show support.)

(I know Senator Trillanes can defend himself. For me, I want him to know that even if we are not from the same party, we know what is being done to him. And because it is wrong, we are one with him.)

Robredo said President Rodrigo Duterte’s revocation of the amnesty granted to Trillanes in 2011 is a clear form of “harassment” and is meant to silence his critics.

Despite this, she said the persecution of Trillanes would unify the opposition even more. (READ: #AnimatED: Kris vs Mocha: Lessons for the catatonic opposition)

“Sana di ito maging dahilan para matakot ang ating kababayan. Bagkus maging dahilan ito para magkaisa tayo,” she said. (I hope this does not become a reason for the public to be afraid. Instead, I hope it becomes the reason for our unity.)

In February 2017, Senator Leila de Lima, Duterte’s fiercest critic, was jailed over drug charges she maintains were fabricated. It was De Lima who launched the investigation into the spate of extrajudicial killings early in Duterte’s term.

Duterte ordered the revocation of Trillanes’ amnesty, citing the senator’s supposed failure to submit an application and to admit guilt. Rappler documents, however, showed Trillanes did both.

The Department of Justice filed a “very urgent” motion for an alias arrest warrant. The Makati Regional Trial Court Branch 148  did not immediately issue a warrant and gave Trillanes 5 days to comment on the DOJ motion.

Trillanes on Thursday has asked the Supreme Court to stop the “unconstitutional” order of Duterte. He also vowed to run after the people persecuting him. – Rappler.com