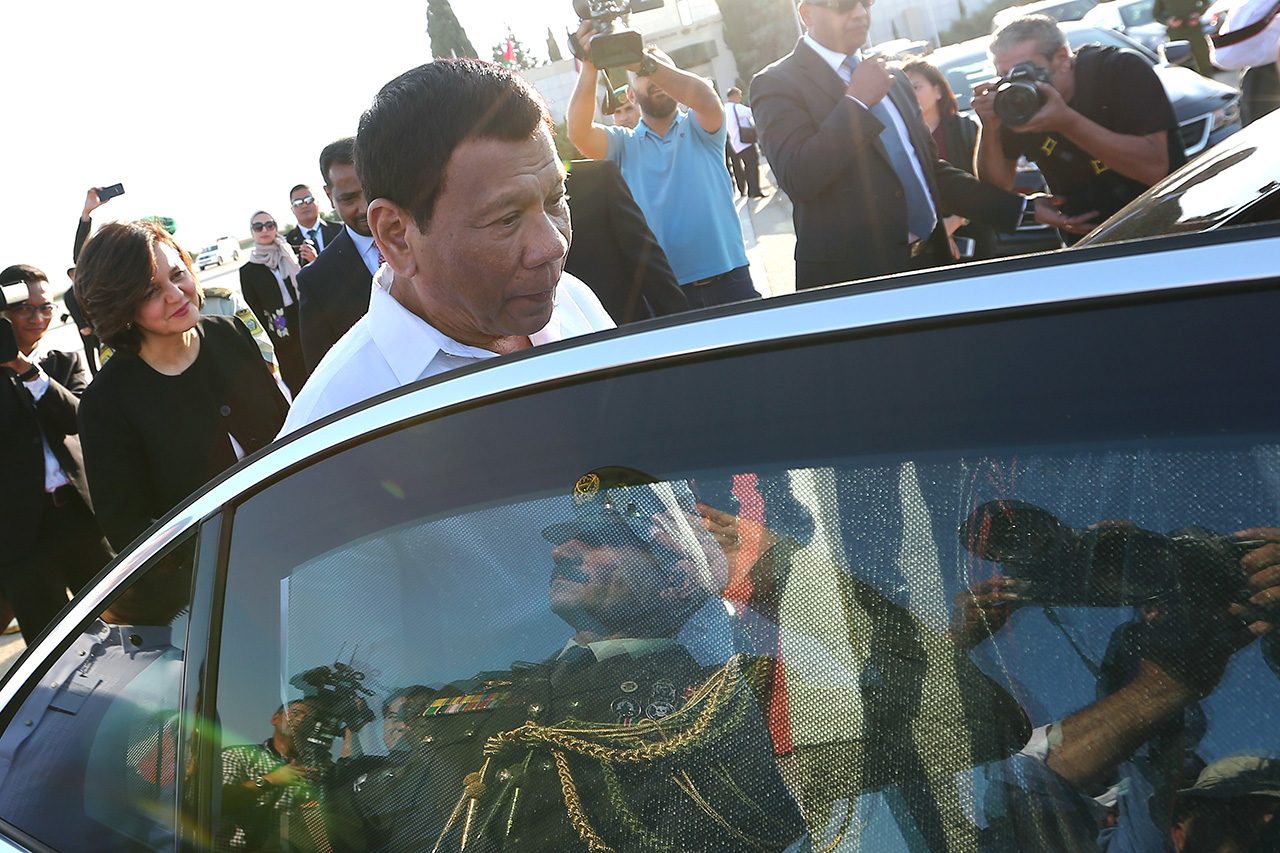 Facebook Twitter Copy URL
Copied
Rather than order the military to arrest Senator Antonio Trillanes IV, President Rodrigo Duterte has agreed to wait for the courts to issue an arrest warrant against his fierce critic

MANILA, Philippines – President Rodrigo Duterte has decided to wait for the courts to issue an arrest warrant against Senator Antonio Trillanes IV, rather than order a military arrest.

Presidential Spokesman Harry Roque announced this on Friday, September 7 during a press conference in Amman, Jordan, where Duterte was on an official visit.

“After a long discussion, the President says he will abide by the rule of law. He will await the decision of the regional trial court if they will issue a warrant of arrest,” said Roque.

Duterte made the decision in consultation with members of his Cabinet on  Proclamation No. 572, which revoked Trillanes’ amnesty granted in 2011 and ordered his immediate arrest.

“He will allow the judicial process to proceed and he will wait for the issuance of appropriate warrant of arrest before Senator Trillanes is arrested,” said Roque.

“He recognizes that only the courts can issue a warrant of arrest,” Roque said.

However, Duterte was told the military can arrest Trillanes, despite the opposition senator’s contention that military courts have no jurisdiction over him since he resigned from military service 4 years before being granted amnesty.

“The other alternative was to invoke the military court proceedings and for the military to immediately re-acquire jurisdiction over him. It was explained that it can be done because unlike civil courts, the proceedings in court martial was pending. No case was dismissed in the pending court martial,” said Roque.

However, the charges against Trillanes in the court martial proceedings was violation of Article 96 of the Articles of War for conduct unbecoming of an officer and a gentleman. The maximum penalty for such charge is dismissal from service. Trillanes is no longer a soldier.

Hours before the Palace announcement, the Department of National Defense (DND) issued a similar statement, that it will wait for the Supreme Court (SC) decision on Trillanes’ petition against Proclamation 572. – Rappler.com