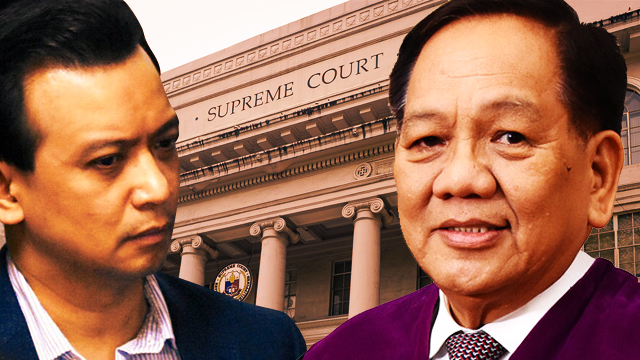 The special raffle was conducted on Friday after Trillanes’ lawyer requested for one. Special raffles are allowed for urgent matters, based on the SC’s internal rules.

The internal rules could have also allowed Peralta to make a recommendation also on Friday, but the Supreme Court closed at 5 pm without one.

As such, the petition will be tackled Tuesday, September 11, when the en banc meets.

Peralta’s recommendation as member-in-charge will carry some weight in determining Trillanes’ fate.

The most immediate concern for Trillanes is whether or not the Supreme Court will vote to grant him a temporary restraining order (TRO). If it does, Trillanes can finally leave the Senate premises where he has been holed up since September 4, to shield himself from a possible military arrest. (READ: Trillanes: Supreme Court TRO will give military a ‘way out’)

President Rodrigo Duterte’s Proclamation No. 572, which voids Trillanes’ amnesty, directs both the military and the police to apprehend Duterte and detain him where he was jailed before.

Justice Secretary Guevarra defended Duterte’s presidential powers to direct such a warrantless arrest, although lawyers slammed it as grossly unconstitutional.

Trillanes does not acknowledge the military’s jurisdiction over him – a civilian – but he heeded the advice of friends and lawyers to stay in the Senate, because no one can be arrested while inside its premises.

Trillanes petitioned the SC to nullify the entire proclamation for lack of legal basis. He chose to go to the High Court despite warnings that he may end up losing in the SC, like fellow opposition Senator Leila de Lima.

Peralta was a reported front-runner for chief justice, but lost the coveted spot to Teresita Leonardo de Castro, who will retire on October 8. But Peralta will once again be automatically nominated for chief justice in October.

Trillanes also faces requests for a warrant of arrest before two branches of the Makati Regional Trial Court (RTC). – Rappler.com