AFP: We are united despite Trillanes amnesty issue 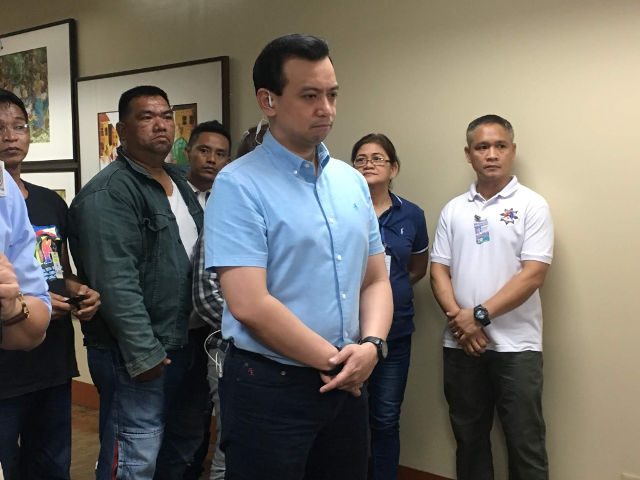 MANILA, Philippines – The Armed Forces of the Philippines (AFP) remains united, it said in a statement on Friday, September 7, despite being buffeted by the controversial issue of President Rodrigo Duterte revoking the amnesty of navyman-turned-senator Antonio Trillanes IV.

“The AFP as an institution is united and committed to the chain of command and the rule of law,” the AFP said in a statement sent to reporters.

The AFP is currently reviving administrative cases against Trillanes, but its managing department, the Department of National Defense has decided that it would wait for the Supreme Court to decide on the validity of Duterte’s proclamation revoking Trillanes’ amnesty.

Why is there doubt: Trillanes warned the AFP not to allow itself to be used by Duterte for his political agenda.

He added that there are other servicemen who are “concerned” about the military’s stand of “just following orders.”

Trillanes earned a spot in the roster of Duterte’s harshest critics, finding themselves often on opposing sides in feuds ever since the campaign period of the 2016 elections.

Trillanes is not combative: Trillanes, however, ackowledged that the concerns of some do not necessarily point to a fractured AFP. He said that “there’s no crack in the AFP” despite differing views here and there.

What he said he wanted to emphasize was that the AFP should do what are both legal and moral. (READ: Disobey Duterte’s ‘illegal orders,’ Alejano asks AFP, PNP)

“The AFP is united. They may have differing opinion about different things, but when it comes to their word, they are united. They are loyal to their chain of command and to their promised mandate before the Constitution. I don’t have any doubt about that,” Trillanes said in a mix of English and Filipino.

“And it should remain that way,” he added. – Rappler.com