DOJ to court: ‘Simply ignore’ case dismissal, get Trillanes out of his ‘hole’ 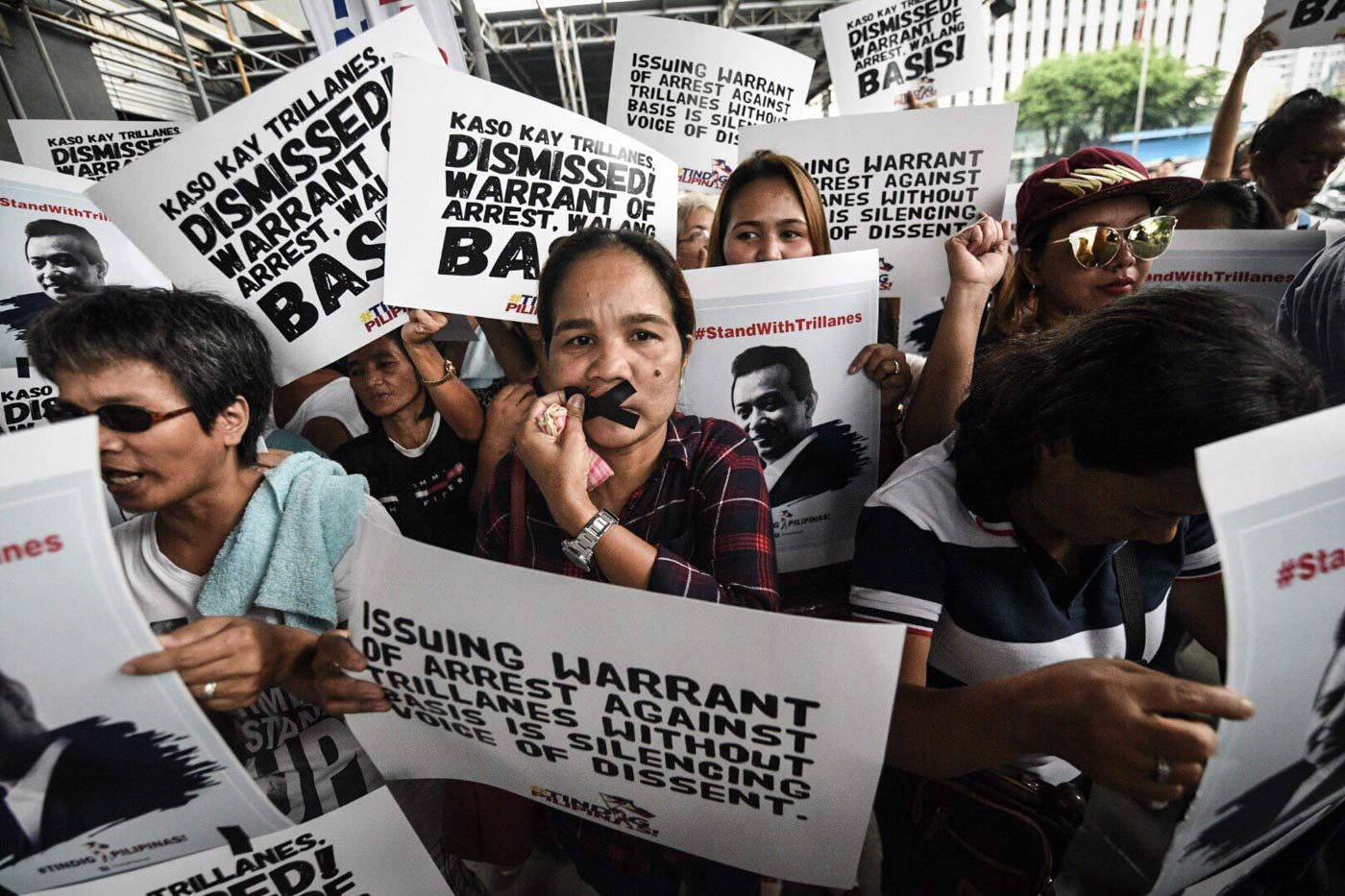 Facebook Twitter Copy URL
Copied
The Department of Justice takes a swipe at Senator Antonio Trillanes IV for 'having the propensity to hole up in an enclosed building, establishment, or an institution'

MANILA, Philippines – The Department of Justice (DOJ) has told the Makati Regional Trial Court (RTC) Branch 148 that it “may simply ignore” the dismissal of the cases of Senator Antonio Trillanes IV in 2011, and order his arrest to get him out of his “hole.”

Thursday, September 13, is Trillanes’ 10th day holed up inside his Senate office as he tried to fend off a warrantless arrest that remained his top fears, despite a pronouncement from President Rodrigo Duterte himself that he will not be arrested without a warrant. (READ: EXPLAINER: What the Supreme Court TRO denial means for Trillanes)

In the DOJ’s reply filed before Branch 148 on Thursday, DOJ prosecutors took a swipe at Trillanes for “having the propensity to hole up in an enclosed building, establishment, or an institution,” referring to the 2003 Oakwood mutiny and the 2007 Manila Peninsula siege.

“In recent days, one can fairly assume that that disruptive behavior is being employed in the Senate premises, disrupting its day-to-day operation, while evading the processes of the law,” the DOJ said as it reiterated its urgent request for a warrant.

The pleading bought Trillanes more time because his lawyer, Rey Robles, was granted in open court the right to reply to the DOJ. It essentially prolonged the process, giving the senator more breathing time until the judge had to decide whether he would issue a warrant of arrest. (READ: EXPLAINER: Why DOJ has 2 requests for Trillanes warrant)

Branch 148 handled the coup d’etat charges against Trillanes in connection with the 2003 Oakwood mutiny, but these were dismissed in 2011 following the amnesty grant to the senator. Trillanes has invoked his right against double jeopardy, telling the court that it should no longer reopen a long-closed case.

However, the DOJ insisted that the dismissal of the case “has no legal affect” because Duterte’s Proclamation No. 572  declared void ab initio the amnesty to Trillanes. (READ: LIST: False claims of Duterte, Panelo about legal issues on Trillanes amnesty)

“A void judgment or order has no legal and binding effect, force, or efficacy for any purpose. In contemplation of law, it is non-existent…. It is not even necessary to take any steps to vacate or avoid a void judgment or final order; it may simply be ignored,” said the DOJ.

DOJ’s basis is a Supreme Court decision in Guevarra vs Sandiganbayan, where the Court found the anti-graft court acted with grave abuse of discretion when it ordered the dismissal of a case. The dismissal in that situation was found to be null and void.

In its pleading sent earlier to the court, Trillanes said that because the period of appeal lapsed after the September 2011 dismissal, the decision was considered final and executory.

To this, the DOJ said, “Having no legal effect, the September 21, 2011 Order cannot attain finality, and the doctrine of finality or immutability of judgment does not apply.”

Trillanes’ amnesty was declared void ab initio for allegedly non-compliance with requirements for filing an official application form, which contains an express admission of guilt. Documents show he did.

“Social and public interest demand the punishment of the offender, hence, criminal actions for public offenses cannot be waived or condoned, much less barred by the rules of stoppel,” said the DOJ.

Branch 150 Judge Elmo Alameda will hear a similar motion for an arrest warrant on Friday, September 14, in connection to charges of rebellion which were also dismissed in 2011. – Rappler.com