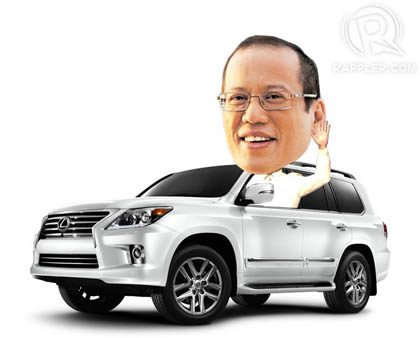 MANILA, Philippines – President Benigno Aquino III is not the only one who will benefit if Malacañang purchases a new presidential vehicle. It will be for his successors as well.

Presidential Spokesperson Edwin Laciderda told reporters via a text message on Monday, March 5, that the new official vehicle would be an “investment” in the safety of incumbent, as well as of future chief executives.

Lacierda was reacting to a House resolution signed by nearly 200 lawmakers, which urged the Department of Budget and Management to acquire a new official vehicle for Mr Aquino, citing security reasons.

Lacierda said Malacañang welcomes the House resolution to provide the President “a new state car equipped with the latest security features” to better protect him.

Aquino received flak last year after he bought a Porsche. He attracted further criticism when he was spotted on board a bullet-proof Lexus LX 50, a luxury SUV.

Aquino told reporters then that the Lexus was leased from his brother-in-law since the presidential cars detailed to him are not working well.

The President has since reportedly sold the Porsche but continues to lease the Lexus.

The 2007 Mercedes Benz limousine that Aquino inherited from his predecessor was damaged by Tropical Storm Ondoy in 2009 and has since been prone to breakdown. – Rappler.com