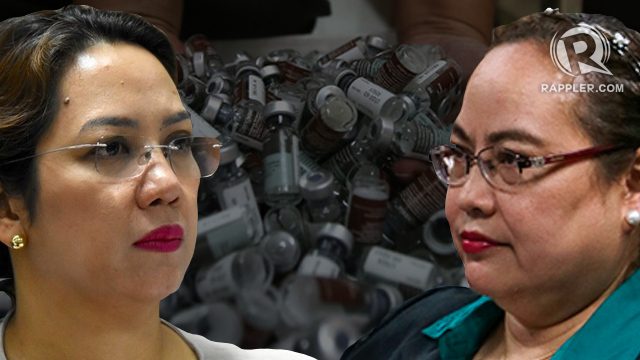 In a complaint-affidavit given to media on Wednesday, September 19, Garin said Ubial’s “reckless” handling of the now-suspended Dengvaxia dengue vaccine immunization program “was the only possible cause of reported deaths.” (READ: No need to panic over Dengvaxia-linked deaths – Duque, UP-PGH experts)

She said Ubial’s decision to expand the immunization program to communities “contributed” to deaths of students supposedly linked to the risky dengue vaccine.

“It is unfortunate that several complaints were filed against me and other DOH officials when in truth only Secretary Ubial’s negligence contributed to the alleged reported deaths because of her hasty approval, launch, and implementation of her Community-Based Dengue Immunization Program,” Garin said.

Rappler reached out to Ubial for comment but has not received a reply as of posting.

The DOH’s school-based immunization program was launched in April 2016 under then-Secretary Garin. Health experts at the time questioned the “rushed” implementation of the mass vaccination program. They argued it could pose risks to Filipinos since studies on its safety were still being conducted at the time. (TIMELINE: Dengue immunization program for public school students)

But after Ubial assumed the post as health chief in July 2016, the DOH also sanctioned community-based immunization programs through its Memorandum No. 2017-0210 and Memorandum No. 2017-0326. During Senate probes into the Dengvaxia controversy, Ubial said lawmakers “pressured” her to continue the dengue vaccination program, which she had long opposed.

Apart from this, Garin also accused Ubial of allegedly relaxing security protocols by replacing the required prior consent of those to be vaccinated to an ‘implied consent basis.”

“Secretary Ubial considered as implied consent the mere act of a parent bringing his or her child in the community center for immunization, even without a written consent from the parents,” Garin said.

Garin along with other former DOH officials face criminal and graft complaints for their involvement in the Dengvaxia mess.

The Dengvaxia controversy started in November 2017 vaccine after pharmaceutical comany Sanofi Pasteur released an advisory warning that its vaccine could cause a person to later develop severe dengue if he or she had not been infected by the virus prior to immunization.

Health Secretary Francisco Duque has since suspended the program but by then over 800,000 students had gotten the risky dengue vaccine. – Rappler.com