Rescuers of Itogon: No surrender until all bodies found 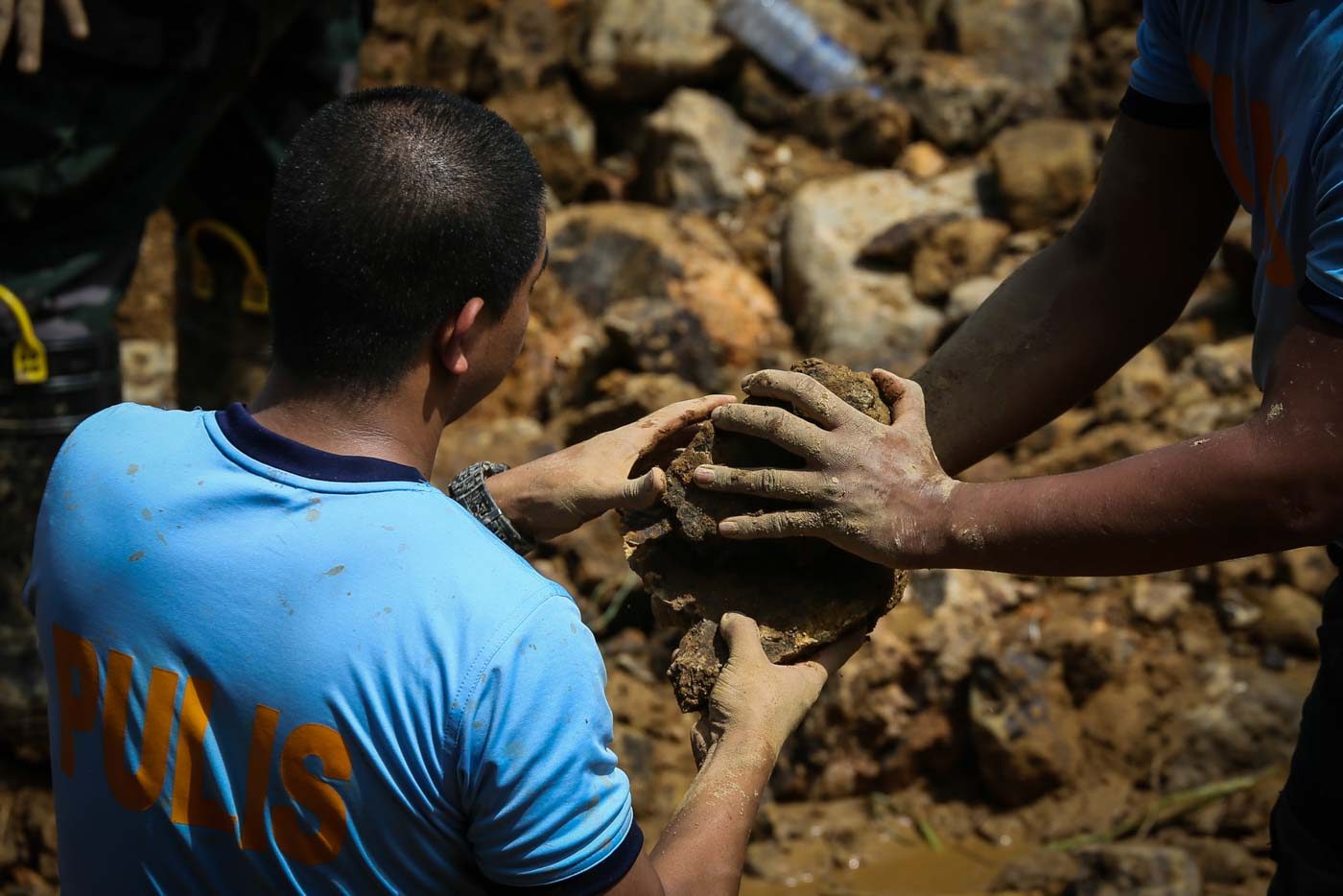 BAGUIO CITY, Philippines – At 8 am every day since September 16, hundreds of government and volunteer rescuers gather in Barangay Ucab and make their way to the site of what used to be a bunkhouse for small-scale miners and their families.

The rescuers, numbering anywhere from 800 to 900, dig out a shovel full of soil at a time, hoping to find the missing.

At the end of Wednesday, September 19 – day 5 of the search operation – 21 bodies have been recovered. Some 58 more remain missing.

Hundreds dig through tons of soil, rocks, and debris under the glare of the sun, some using only their bare hands and light digging equipment. They are racing against time. The latest bodies recovered by the team have become difficult to recognize. Ideally, a backhoe is used for such operations, say rescuers.

“There are 800 to 900 people there daily. A backhoe can contribute much more than the human effort of just 800 people,” says Superintendent Mario Mayames, a member of the Philippine National Police contingent in the rescue team.

Mayames says a backhoe would spare rescuers from the threat of also being buried under loose earth, and it can also easily dig out bigger volumes of earth and also huge rocks.

Rescuers, however, are aware of the difficulty of bringing in a backhoe, as the road where the equipment can be brought in has been blocked by the landslide. They are also  forced to end their search when night falls as power lines have yet to be restored.

The landslide is also in a class of its own, says Baguio City Fire Marshal Chief Inspector Nestor Gorio. While his firefighters are trained to battle blazes and rescue trapped victims, digging through a mass of earth is a different story.

(The Itogon case has such a big effect. The affected area is too wide, and there are  so many people affected. That’s the challenge here, and also the soil covering the victims is thick.)

He adds in Filipino: “We’re usually ready to respond to these cases, but the roads have been washed out, so we couldn’t bring our heavy equipment. So it’s really slow.” 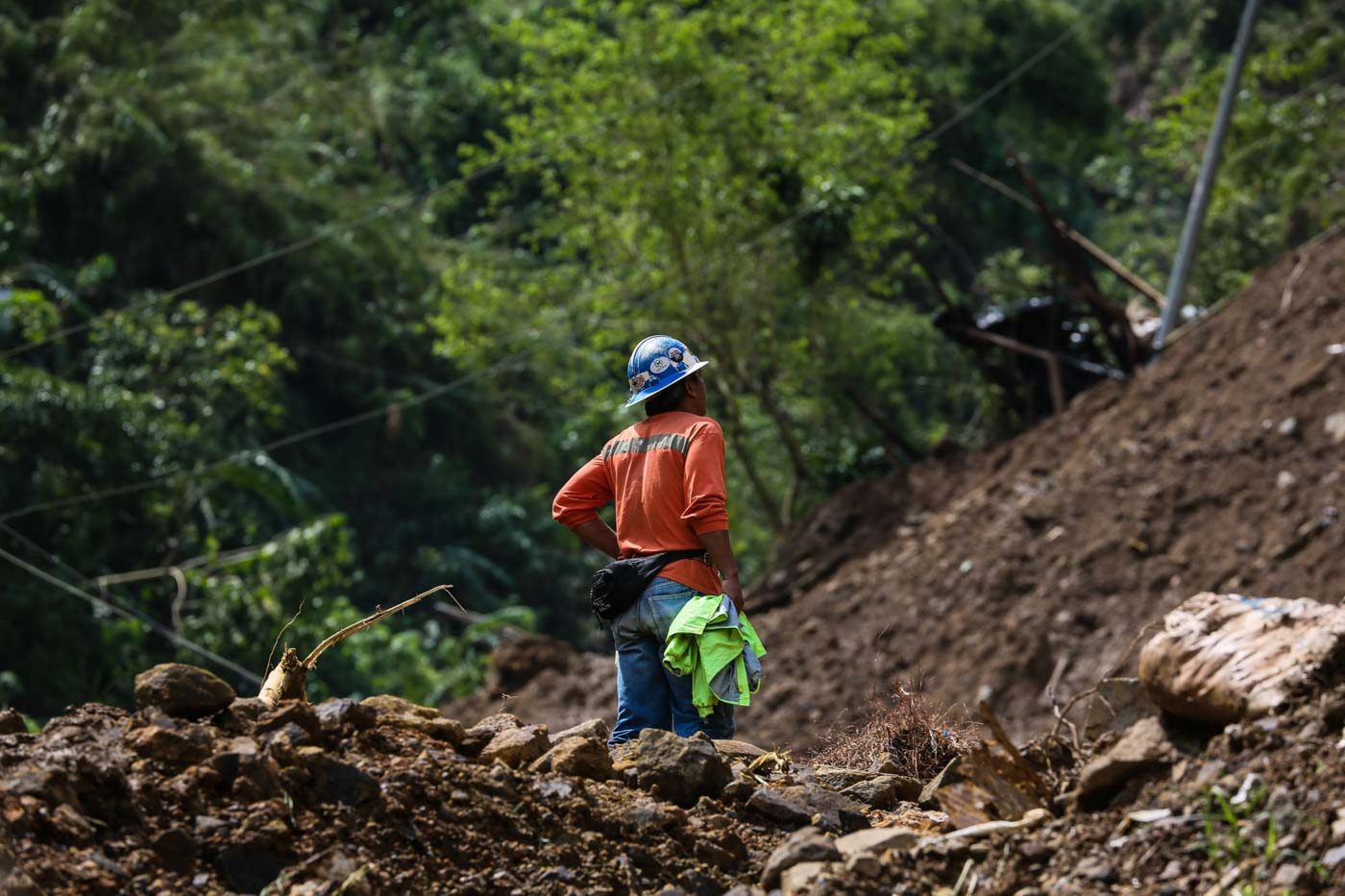 Even if they lack equipment, and  even if some of them have to scour the earth with their bare hands, rescuers – leaning on each other for strength – remain optimistic that they will recover the rest of the missing.

“We draw strength from each other. Ako, kapag nakikita ko ang mga relatives, hindi ako napapagod, lumalakas din ako (When I see the relatives [of the missing] I don’t feel exhausted, I even feel stronger),” says Mayames.

Aside from uniformed personnel, volunteers from the victims’ families have joined the rescue operations. (READ: In Itogon, sister volunteers to dig beneath the soil to look for brother)

Mayames hails from La Trinidad, the capital of Benguet. He says he will not give up on the search. “Sa Cordillera…‘di kami titigil hanggat ‘di amin makuha lahat (In the Cordillera, we do not stop until we find all of them).”

“Physically, nararamdaman namin ‘yung pagod, pero nandoon yung adrenaline eh, na kababayan mo ito eh. This is the last thing you can do for them…. Napapagod kami physically, but day to day, every morning, we have to wake up, bangon, and do our obligation,” Mayames said.

(Physically, we feel the exhaustion, but the adrenaline is there, that this is for your countrymen. This is the last thing you can do for them…. We are tired physically, but day to day, every morning, we have to wake up, to rise, and do our obligation.) – Rappler.com