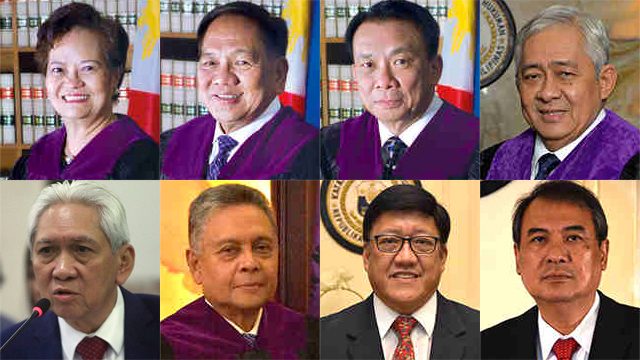 On Tuesday, September 25, the panel members voted 22-0 to approve their committee report, which explained their reasons for rejecting the impeachment complaints filed against De Castro and the following SC justices:

They accused the 7 SC justices of culpable violation of the Constitution for voting yes to the quo warranto petition filed by Solicitor General Jose Calida against Sereno.

De Castro, Peralta, Bersamin, Tijam, and Jardeleza were also accused of betrayal of public trust for refusing to inhibit themselves from voting on the quo warranto petition after testifying against Sereno at the impeachment hearings against her during the last quarter of 2017 to early 2018.

The impeachment complaints were deemed sufficient in form on September 4, allowing it to move to the next stage of impeachment proceedings.

But on September 11, 23 members of the justice committee deemed the complaints insufficient in substance, effectively dismissing them. Siquijor Representative Ramon Rocamora was the lone legislator who voted in favor of the impeachment complaints.

No less than Speaker Gloria Macapagal Arroyo briefly attended the September 11 hearing. Lagman believes her presence was a “signal” to the panel to junk the impeachment complaints. But justice committee chairperson Salvador Leachon denied the allegation.

Angkla Representative Jesulito Manalo previously said the SC justices “merely acted within the metes and bounds of judicial power set by the Constitution.”

Cavite 2nd District Representative Strike Revilla also said the SC justices should not be punished for “respecting a coequal branch” when they testified against Sereno before the committee on justice. – Rappler.com