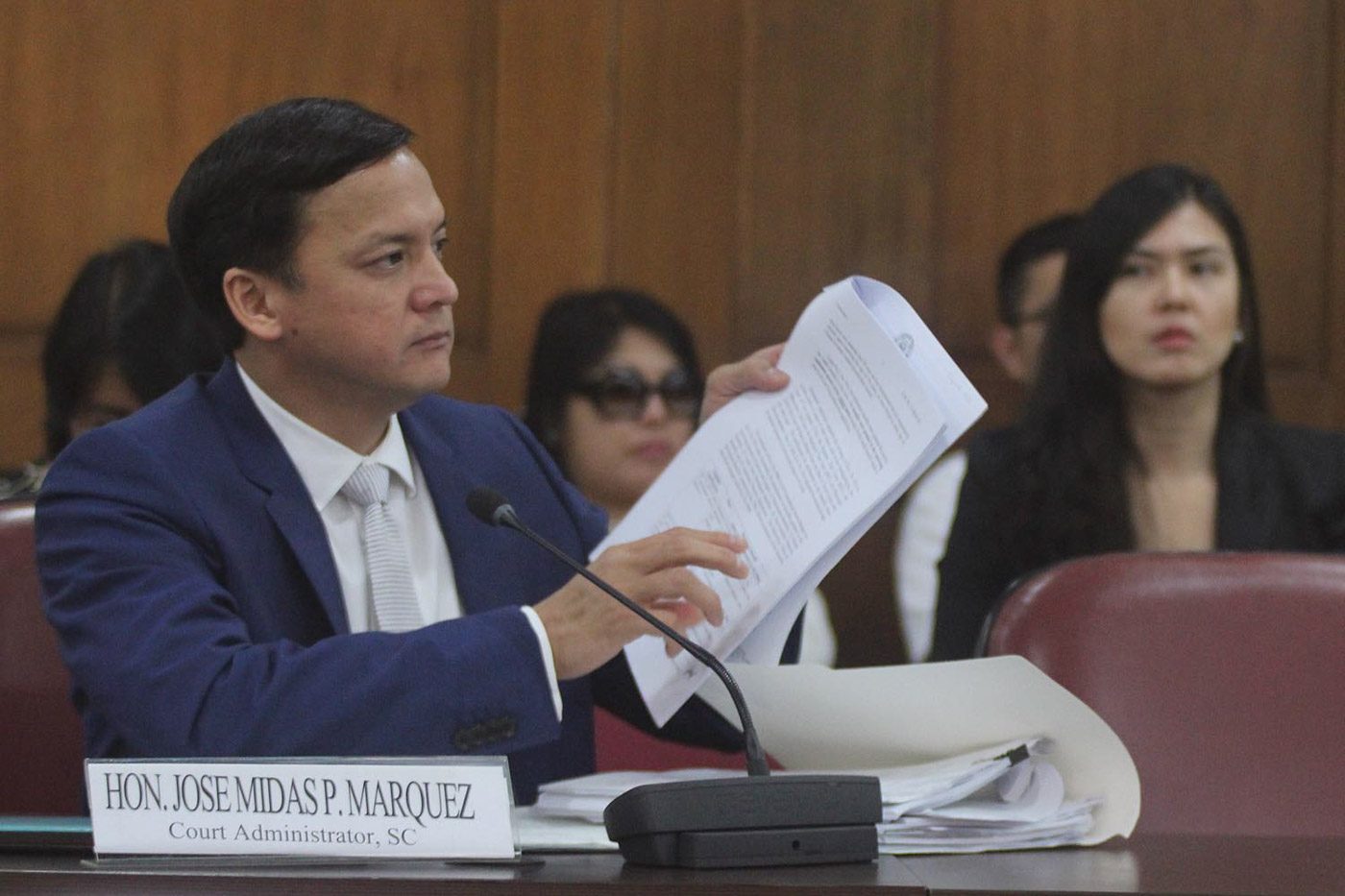 Facebook Twitter Copy URL
Copied
Marquez is among the 6 nominees whom the en banc has recommended to the Judicial and Bar Council (JBC). He was previously interviewed in June 2017.

MANILA, Philippines – Court Administrator Midas Marquez will be back to face the Judicial and Bar Council (JBC) panel on Wednesday, September 26, when it interviews nominees for a spot in the Supreme Court.

Marquez is one of the 8 nominees who will be interviewed by the JBC starting 9 am on Wednesday. The other 5 nominees of the total 13 will no longer be interviewed because their past interviews are still valid.

This is for the vacancy created by former justice Samuel Martires, who has been appointed Ombudsman.

Marquez has been bypassed thrice since 2017, making this round his 4th application for a Supreme Court vacancy since that time.

He faced the panel in June 2017, and the JBC considered that interview valid for his 2nd and 3rd applications.

Marquez was endorsed by former chief justice Reynato Puno to President Rodrigo Duterte himself for the last vacancy. Instead, Duterte appointed Jose Reyes Jr, formerly of the Court of Appeals (CA).

For the Martires vacancy, Marquez is one of the 6 nominees whom the en banc voted Tuesday, September 25, as the Court’s collective recommendations to the JBC.

For one, Sereno accused Marquez of orchestrating the rallies of judiciary employees against her. Marquez has also faced a graft complaint since, and an opposition to a justiceship, citing as basis the misuse of World Bank funds in 2012.

The recommended nominees of the en banc are:

The JBC is not compelled to follow the en banc’s recommendation. However, by tradition, the chief justice, the ex-officio chairman of the JBC, votes for whomever the en banc has recommended.

When the Martires spot is filled up, two more vacancies will still be up for grabs this year.

The first is the still open spot left by Teresita Leonardo de Castro when she took the Chief Justice post, and the second is the vacancy that De Castro will again create when she retires on October 8. (READ: By 2022, Supreme Court filled with Duterte appointees)

Here’s the complete list of nominees for the Martires vacancy, almost all of whom, like Marquez, had also applied before.

For interview on Wednesday: