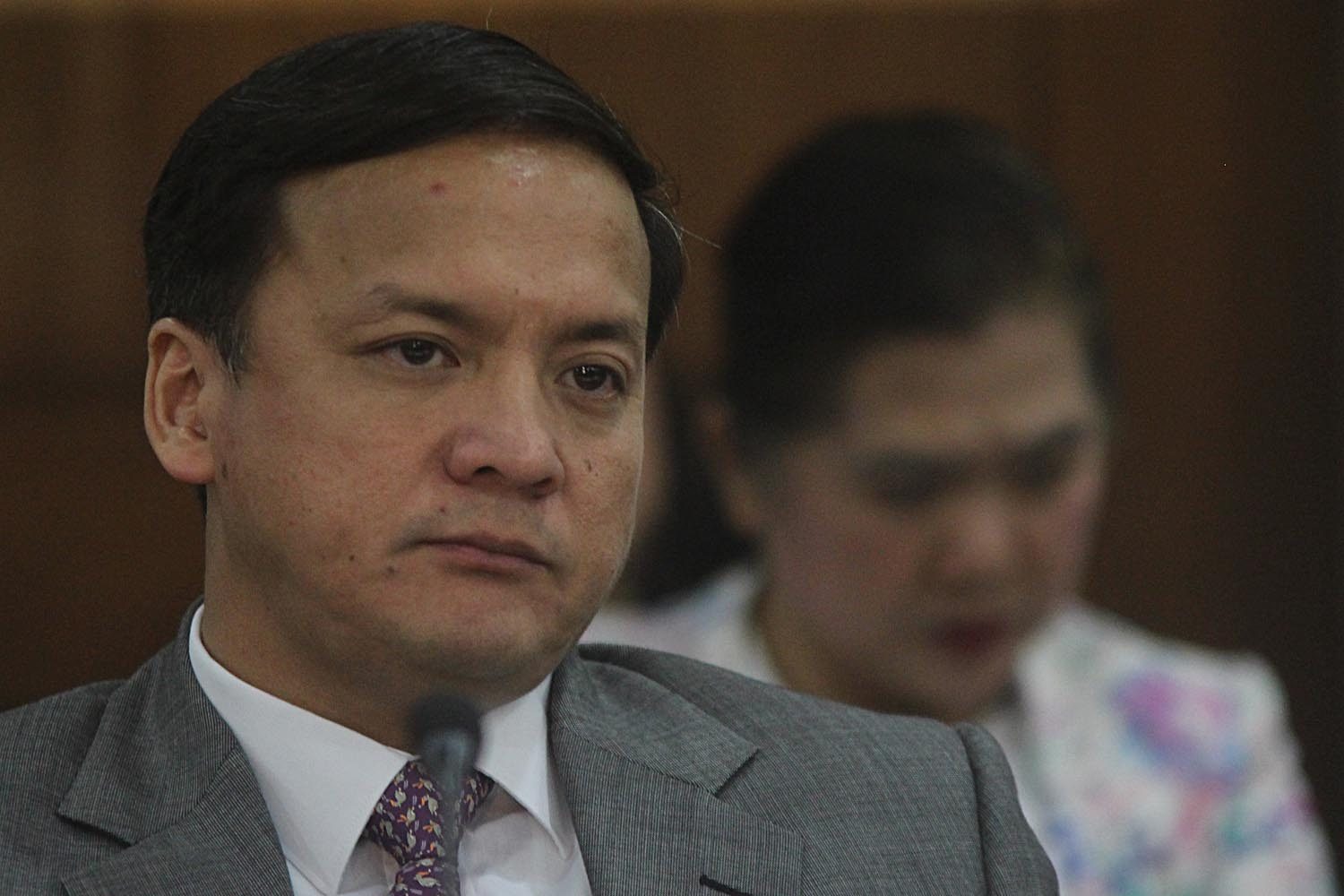 In a sworn report sent to the Judicial and Bar Council (JBC), President Rodrigo Duterte’s daughter said Marquez used “his influence and authority to meddle with my disbarment case, asking complainants to withdraw their complaints.”

The disbarment complaint against the mayor was filed in 2011 after she punched a sheriff who insisted on implementing a demolition order.

The JBC is currently screening 13 applicants, including Marquez, for a vacancy at the Supreme Court.

Carpio sent her formal opposition to the JBC on September 21. Anybody can send a complaint or opposition against any judiciary applicant, provided it is submitted to the JBC within 10 days of announcement of nominees.

In Carpio’s 3-page affidavit, a copy of which was obtained by Rappler, she detailed how a woman tried to intercede for Marquez. We asked her if indeed the affidavit is hers, and the Davao mayor replied on Thursday, September 27: “Yes, that is my JBC document.”

The story begins with a certain Gemma Sotto, who hails from Davao. In his JBC interview on Wednesday, September 26, Marquez said he came to know Sotto at an event abroad where he also got to know Sotto’s son, identified as Bench Sotto in Carpio’s affidavit.

Marquez told the JBC he eventually hired Bench Sotto as his contractual legal clerk at the Office of the Court Administrator (OCA).

Marquez said Sotto offered her help, but that he had no other recourse but to say thank you to any “well-meaning friends or acquaintances.”

“I would just say thank you without me knowing what they are going to do and without knowing the extent that they will be doing whatever,” said Marquez.

Gemma Sotto is part of Duterte-supporter groups DDS Global and Tapang at Malasakit Global. This detail was revealed by lawyer and Duterte supporter Bruce Rivera in his text messages to Carpio, screenshots of which were attached as annexes to the opposition.

“In the first week of September this year, a certain person in the name of Ms Gemma Sotto sent me a text message requesting for a meeting. Not having received any response from me, it appeared she sent messages to Atty Bruce Rivera informing him that she is requesting for the meeting because she will hand carry a Supreme Court document and personally deliver it to me,” Carpio wrote.

Sotto’s agenda turned out to be the withdrawal of the disbarment complaint filed by Davao sheriffs against the mayor in 2011. This was after Carpio punched a sheriff who was implementing a demolition order.

That sherriff was Abe Andres, although it was not he, but fellow sheriffs who filed the disbarment complaint against Carpio.

“I have consistently refused to meet with Gemma Sotto. However, she was able to contact and meet with my chief of staff, Atty Raul Nadela Jr on September 13, 2018,” Carpio wrote.

Nadela executed his own affidavit saying he knew Sotto from way back.

“During the said meeting, Ms Sotto informed Atty Nadela that she and Atty Marquez worked together to push Sheriff Abe Andres to execute an affidavit about my case and require the complainants to file a motion to withdraw their complaint based on the said affidavit,” Carpio  wrote.

In his version of events narrated to the JBC, Marquez admitted to meeting members of the Sheriffs Confederation of the Philippines (SCOPHIL) earlier in September but that the sheriffs merely asked him for legal advice on whether they were allowed to withdraw their complaint.

Without expounding why and how the meeting took place, Marquez said he just told the sheriffs, “It’s up to you.”

Sotto supposedly gave Nadela the relevant documents pertaining to the dropping of the complaint, including Andres’ affidavit and the complainants’ motion to withdraw. This had been stamped as received by the Supreme Court.

“I was shocked by the audacity of Ms Sotto and Atty Marquez to interfere in an ongoing disbarment case. I felt humiliated by their actions,” said Carpio.

Marquez said that he was informed the SCOPHIL had, as early as 6 months ago, decided by a majority of one vote to drop the complaint against Carpio in order to have closure.

“The allegation that I talked to complainants, the witnesses, that I maneuvered or manipulated, with all due respect, is not accurate,” Marquez said.

But Carpio said Sotto could not have obtained affidavits and motions related to the disbarment case “without the help from Atty Marquez, who is her friend, and the boss of her son and has access to my case as the Court Administrator of the Supreme Court.”

The Davao mayor said that while Sotto’s words are her only concrete basis for implicating Marquez, she said she has “no reason to doubt their connection to each other.”

Carpio said Sotto first approached her in August 2018 asking about her thoughts on Marquez. “Thereafter, I learned that Ms. Sotto has been going around lobbying with friends of President Duterte for the appointment of Atty Marquez as an Associate Justice of the Supreme Court,” said the mayor.

Carpio also said Rivera told her that Marquez was asking for her help to get an appointment.

“Please tell Mans (Carpio, Sara Duterte’s husband) that I wasn’t trying to associate myself with Midas Marquez. He approached me. I couldn’t do anything because he’s close to Gemma Sotto,” was Rivera’s text message as shown in screenshots.

In Rivera’s other text messages, Marquez had supposedly attended several thanksgiving parties “for the police and judiciary” organized by Duterte supporters. Rappler asked Marquez on Thursday about the claim that he is close to Rivera and Sotto. “I think those are irrelevant now. As Court administrator, I’m the official liaison of the Court. And I have regular dealings with the PNP, AFP, DILG, DOH [Philippine National Police, Armed Forces of the Philippines, Department of the Interior and Local Government, Department of Health], Congress, etc,” Marquez said. “It’s part of my work.”

Asked what his official business was as liaison of the Court in the Duterte-supporter events, Marquez replied that he was invited by the Filipino community in London.

“It turns out, many, if not most, were PRRD [President Rodrigo Roa Duterte] supporters. But elections at that time were long done and PRRD was already president. And how do you say no to the Filipino community abroad who knows that a high government official is there on official business?” Marquez said.

Explaining his presence in the Camp Crame event, he said, “It was a ‘Pasasalamat ng mga OFW sa PNP, AFP and Judiciary.’ And I delivered a message to the OFWs [Overseas Filipino Workers] present. Anything wrong there?”

The Constitution requires that a member of the judiciary “must be a person of independence.”

Sought by reporters for further questions on Wednesday after his JBC interview, Marquez said his answers to the JBC members are enough.

“I am so rest assured with my qualifications, my credentials, my track record, that for me, these qualifications will stand on their own merit,” said Marquez, who is now on his 4th application since 2017 for a justice spot at the High Court. – With reports from Pia Ranada/Rappler.com