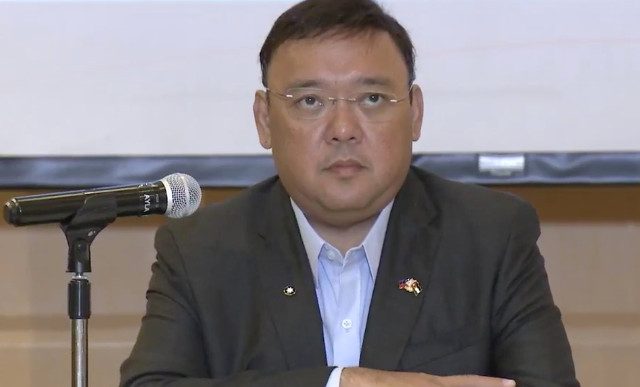 MANILA, Philippines (UPDATED) – Presidential Spokesman Harry Roque on Friday, September 28, sought to clarify that President Rodrigo Duterte was “not serious” when he admitted that extrajudicial killings are his only sin.

The day before, Duterte had said in a Palace event that “extrajudicial killings,” was the only “sin” he was guilty of.  At the time, he was railing against criticisms of his presidency.

It was an apparent admission that he was behind the summary killings linked to the administration’s crackdown on illegal drugs, which had claimed some 4,000 deaths, according to Philippine National Police statistics. Other groups cite an even higher number – up to 12,000 dead.

According to Roque, Duterte was not admitting to anything and had only made the remark in reference to what critics consistently accused him of.

“Sinasabi lang niya iyan kasi nga palaging sinasabi ‘yan ang ginagawa niya (He only said that because that is what people are always saying),” said his spokesman.

This was echoed by Chief Presidential Counsel Salvador Panelo in another radio interview.

Roque described Duterte as using “playful” language to emphasize that while critics accuse him of being behind summary killings, they could not accuse him of stealing from government coffers.

“That’s the President being himself, being playful – highlighting the point that he isn’t corrupt,” Duterte’s spokesman said.

As in similar explanations of Duterte’s most outrageous statements, Roque advised the public not to take the Chief Executive literally.

“I don’t think the context there was literal,” he said in a mix of English and Filipino.

For his part, Panelo offered a tip on how the media and the public should interpret Duterte’s vague or surprising remarks.

(It’s wrong. It should be that when the President says something, you look at his previous statements. You should interpret it in a way that is consistent with what he said before.) – Rappler.com